How to make a splitter cable for the USB2 OTG port on the RPi 4B?

According to the answer to Where is the USB2 OTG port on the RPi 4 Model B located? the Raspberry Pi 4B has a "hidden" OTG port in the USB-C power connector. I found at Very simple OTG on pi4 and at 4 ways to connect your Raspberry Pi 4 to the internet how to use the USB2 OTG port just with a simple USB cord. But this is very unstable because the USB port on the connected laptop cannot provide enough power (2.5A - 3.0A).

Is it possible to make such an Y splitter cable? If so, how to make it? Or is there a better alternative? A simple drawing would be nice.

The problem here is that the RPi 4 USB-C connector is hard-wired as an upstream-facing port, which urges the host device on the other side to provide power. Yet if you power the RPi from an independent power supply (using an Y-cable or via the 5V pin), this supply will be connected in parallel to the host device's 5V output, which is problematic.

The simplest solution would be to make a cable which only conveys USB data signals (and ground) but not 5V. However, such a cable wouldn't behave in strict compliance with USB if plugged into an unpowered RPi, because signals on D+/D- lines may then have higher voltage levels that VBUS. Personally I'd add a diode feeding some voltage from host to the RPi (which, as you said, won't likely be enough to power the RPi anyway), just to cover this case. Here's how an Y-cable could look like: 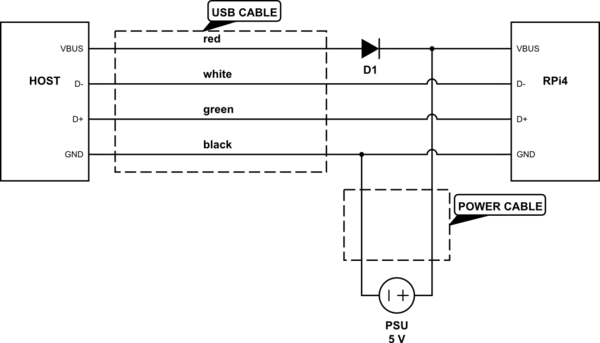 You still shouldn't plug the cable in the RPi while the PSU is off, because that would result in the overcurrent on the host USB port, but at least that won't damage the RPi. If you're careful about always plugging the PSU first, you could omit the diode (leaving VBUS line disconnected).

The power cable could also be connected to 5V/GND pins on the GPIO connector, which will correspond to the same circuit when the USB-C connector is plugged in.

Not the answer you're looking for? Browse other questions tagged usb power-supply pi-4 or ask your own question.

1
Is it possible to log in Raspberry Pi 4B using USB cable?
6
Where is the USB2 OTG port on the RPi 4 Model B located?
3
Can I power raspberry Pi 4 with variable power supply?
1
Can a Raspberry Pi 4 be used as USB gadget but draw power from elsewhere?
3
RpiZero Power Supply through 40 pin Power/GPIO Header or microUSB connector
1
Using USB-C on Pi 4 while powering the Pi via GPIO header pins?

4
USB Power backfeed without Polyfuse mod
2
Raspberry Pi Zero: act as USB mass storage using power port, use data USB port for Wi-Fi
0
Powering the Pi zero from a USB port: what if I acidentally unplug it without doing “sudo shutdown”? How to protect it?
4
Is it safe to power my external hard drive with a Raspberry Pi 3 B+ USB port?
0
USB OTG with power supply connection to Raspberry Pi Zero
6
Where is the USB2 OTG port on the RPi 4 Model B located?
1
Is there a way to have USB data transferred from Pi to HAT?
0
Under-voltages while powering a Pi 3A+ via the +5V/GND pins