Can I power raspberry Pi 4 with variable power supply?

I'm trying to power my new Raspberry Pi 4 via an external power supply, that only has positive and negative leads coming out of it. So I can set that to 5 volts, but then I need to connect it to the Pi somehow. 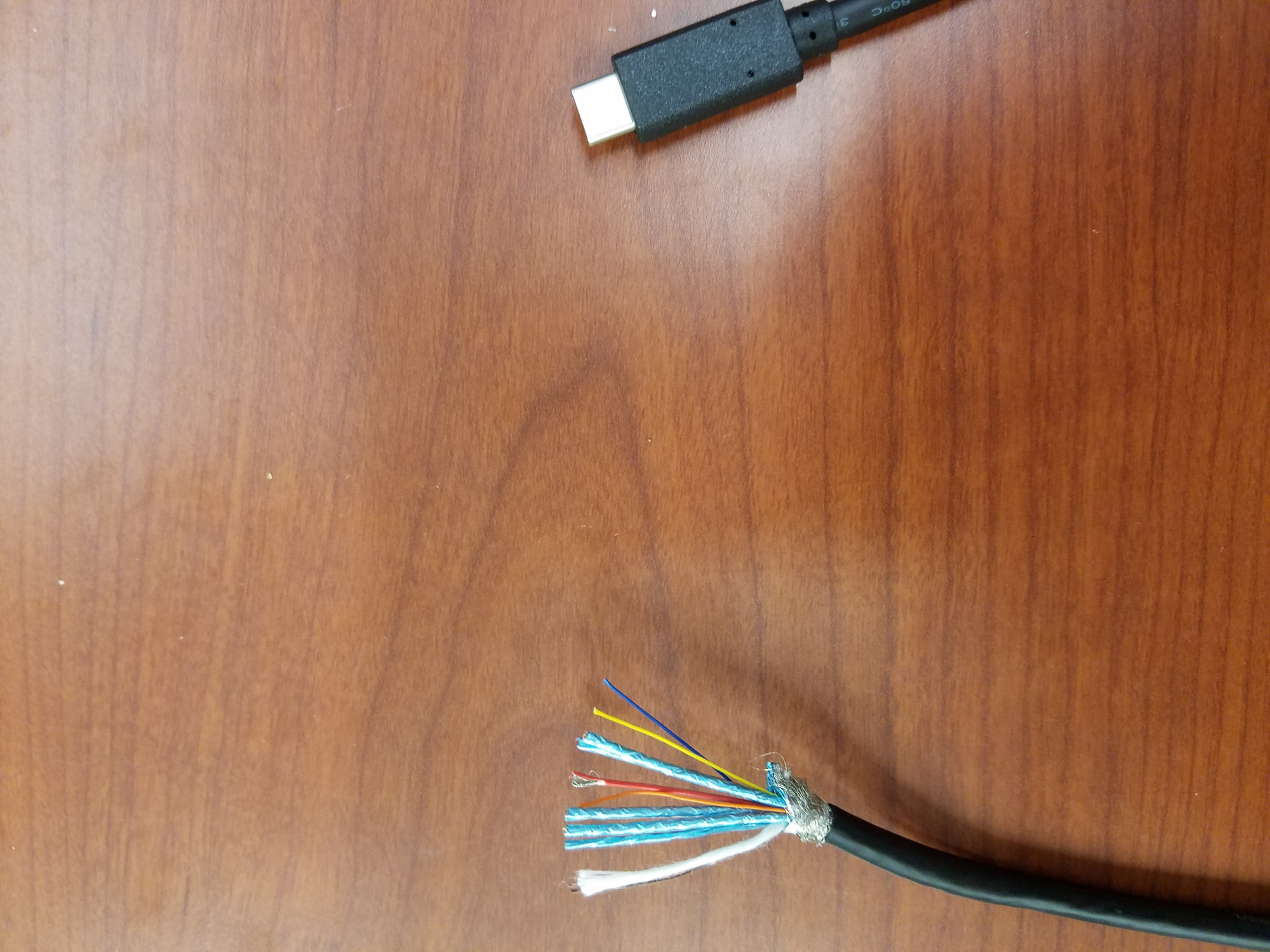 I'm not sure which of the wires is the power in the cable. I thought it would be the red one that doesn't have shielding around it, but when I plugged the other end into my USB C wall wart, I wasn't getting 5 volts on that line when I measured.

So, which wire is power, that I should attach to my variable power supply to get 5 volts to my Pi? And if it is supposed to be the red one, why wasn't I getting power before? Is the USB C standard expecting some sort of handshake to occur before it supplies power? I know the cable was good before I cut it, because I was using it to power the raspberry pi from my USB C wall wart previously.

Or alternatively, is there a better way to accomplish what I'm trying to do? Any help would be appreciated, thank you.

Edit: Ended up just supplying power through the GPIO header. I never got it working with the spliced USB-C cable, and the breakout board I got did not allow enough current for the Pi to run (I should have checked that before ordering it).

I would strongly suggest you DON'T use a variable power supply!

If you do want to take the risk, and use an external supply you can power the Pi through the +5V and Gnd pins on the header; that way you can use suitable sized cables.

My approach is to attach a USB2 socket to an external (non-variable) power supply and use an appropriate USB power cable.

Cutting a USB-C cable is vandalism, but judging from your picture the wires in that cable are inadequate.

I would honestly suggest getting a USB-C breakout board so you can test which wires are your power wires. You can get one like this one, plug the usb c on one side, while providing power to the breakout board.

On the other side of the cable (where you spliced it or cut it), if you have a multimeter, you can check for GND and +V, and thus that is where you could apply the power supply voltage.

A small advice, once you’ve figured out the pins you need to use to connect your benchtop or other powersupply, make sure you have the right amount of current, 500mA will probably not suit most uses on the Pi... I would be safe to put 2000mA.. My current power supply is 4000mA..

Let us know if you get it resolved.https://www.sparkfun.com/products/15100

I was able to do this with a USBC -> USB2 cable. I cut the USB2 end, which has red, black, green and white wires. Then I just connected the red and black to a battery.

Not the answer you're looking for? Browse other questions tagged usb pi-4 or ask your own question.

5
How to make a splitter cable for the USB2 OTG port on the RPi 4B?

0
Will customizing USB pinout help with backfeeding issue?
1
Tapping into 5v power
31
USB Cables… Why are some of them bad for Raspberry Pi?
5
Can not use PL2303 USB to Serial with Pi B+
2
Powering Rpi won't boot using custom microusb and supply
2
Argon One case doesn't power RaspberryPi
0
How to power Rpi4 cluster?