I installed my Pi 3B into a Pimoroni Picade a few months ago, and installed RetroPie from source (as a fresh install). After running the Pimoroni-supplied setup script, RetroPie, EmulationStation etc were all working fine. Many happy hours of nostalgia followed!

The Picade has its own HAT and physical speaker, and I could set the system volume from within EmulationStation, and also within each of the emulators. I had the volume set at 49%.

Fast forward a few months, and I decided to try playing around with a USB headset connected to the Pi, and using the “Desktop” environment included with RetroPie. I plugged in the headset - a fairly cheap-and-cheerful Creation gaming heading - configured the Desktop to use the USB headset, tested it all worked (which it did) and thought no more of it.

However, since disconnecting the headset and returning to using the Picade speakers, I’m unable to change the system volume. It sounds like it’s set to 100% volume - i.e. too loud - despite me changing the setting in the ES settings, alsamixer, RetroPie config, and even in the Desktop environment itself. Regardless of whether I set the volume to 1% or 100%, nothing actually changes the speaker volume. I can adjust the volume within RetroArch via hotkeys, but this isn’t ideal (especially for games that start noisy).

alsamixer and amixer output look OK, at least to my untrained eye: 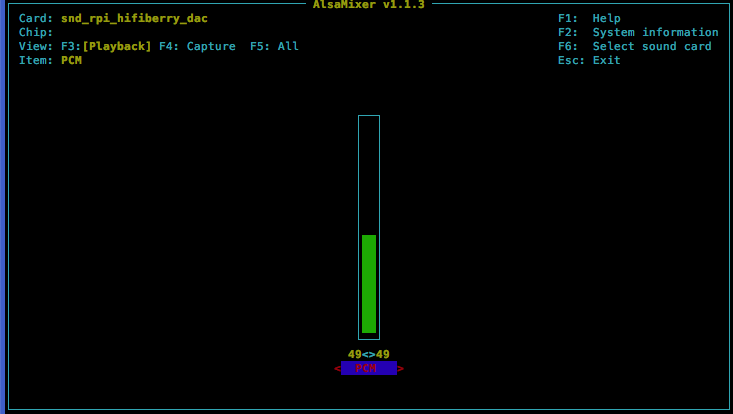 compared to some others I've seen seems to be missing any mention of volume controls - is that perhaps the issue, and how can I restore the ability to set the volume?

Output is the same when ran without sudo.

EDIT3: The Picade install script outputs the following when it's rerun -

Your DAC plays through the Digital channel. It looks like your mixer is setup to control the PCM output, not Digital. But because you have selected as your audio device, it still plays, but can't control the volume etc.

Might be easy as going into your OS desktop (Raspbian) -> Preferences -> Audio Device Settings, Select your DAC sound device from the Sound Card pulldown selector, then click Select Controls... Choose Digital or Master if available.

If that doesn't help then please read on...

Abstract: You will need to set the HAT device as default audio device in OS audio settings, and setup your ALSA mixer to control the digital.

The PCM is probably trying to mix the RPi audio 3.5 jack output, where you may need to have your mixer select which output to mix to, maybe Master or Digital perhaps.

Please have a look at this link provided that runs through various scenarios to RetroPi sound problems.

Once you verify your HAT's audio device is there and selected as default by your OS and ES sound settings, you may need to select which mixer to control your audio device. Make sure it's selected in your ES audio settings, if can.

You may need to edit your es_settings.cfg file...

If you want to try to select the DAC as default audio device in your OS, and try to add these changes to the existing settings (BACKUP your config first obviously),

Give that a try and see if you gain control over the volume.

Not the answer you're looking for? Browse other questions tagged audio or ask your own question.