My aim is to use a RPi 3B+ as a router with an existing wireless router connected as an access point. The following figure explains this: 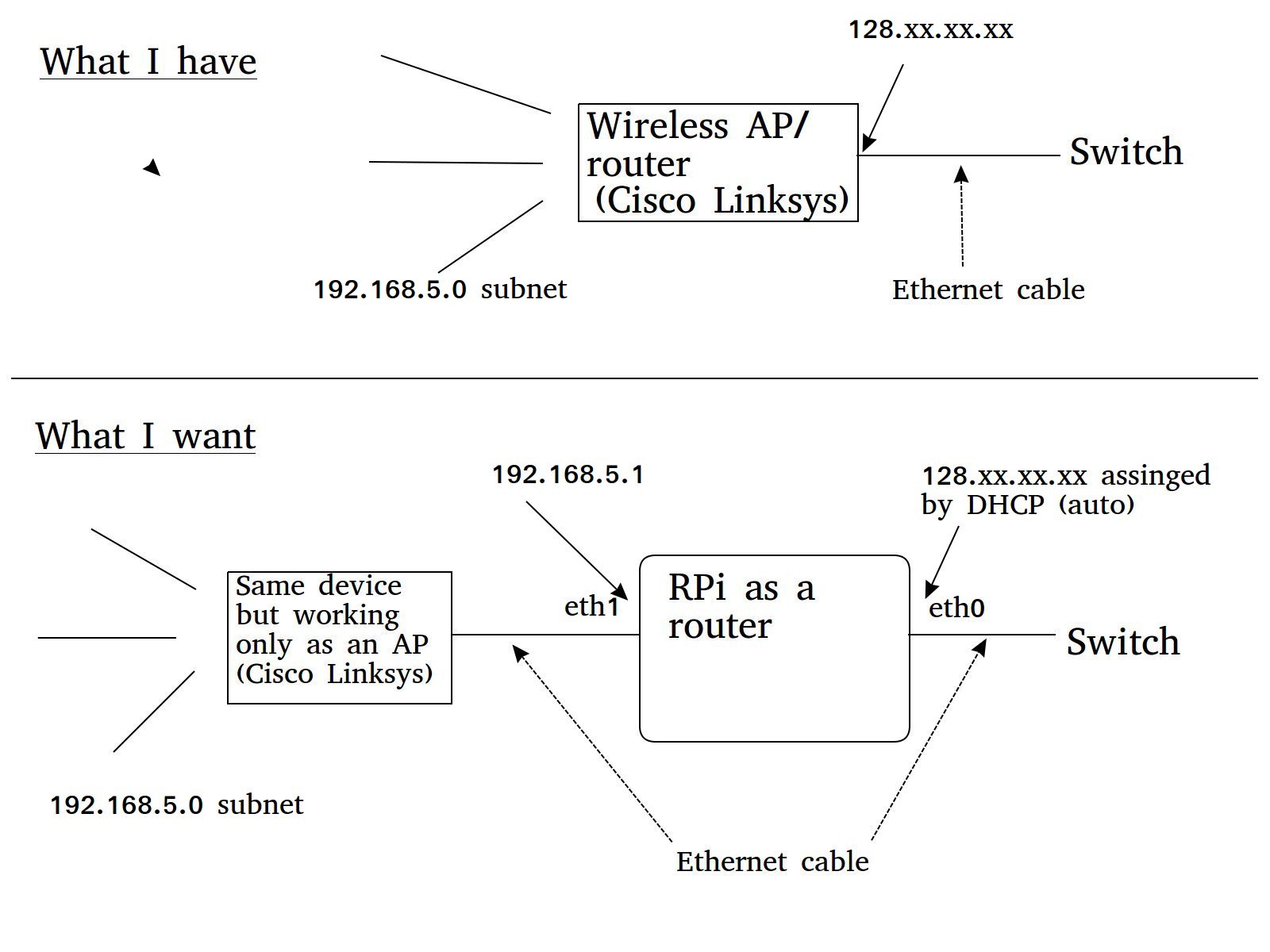 'eth0' is the Rpi's WAN port. The IP for eth0 is assigned automatically by a DHCP server that is beyond my control.

'eth1' is an 'USB to Ethernet' adapter. The wireless network is separated from the network the switch is in, by a NAT service that should run on the RPi.

I am following this tutorial as a guide. I have already configured the router as an AP.

My Problem: When I configure the network (i.e. edit the /etc/network/interfaces file) and restart the networking services (sudo /etc/init.d/networking restart), I get the following error:

I also get a similar error when I try to start the DHCP server after configuration.

Can someone show me what I'm doing wrong?

EDIT: I have made a change to the setup. Instead of getting a direct connection from the ISP, I get it through a switch (hence no modem). What happens beyond the switch is none of my concern)

To do what you want is simple with systemd-networkd because it has everything built-in and you don't need additional helpers. So I will use it for my suggestion, tested with Raspbian Buster Lite 2019-07-10 updated on 2019-08-22. Updates done with sudo apt update && sudo apt full-upgrade && sudo reboot.

First switch over to systemd-networkd. For further information look at (1), (2).

Then create these files:

We also need a Network Address Translation (NAT) on interface eth0 to reach all devices on the access point. Create it with:

In the empty editor insert these statements, save them and quit the editor:

Reboot and it should do.

You could use my project I once wrote. It isn't perfect and I don't have the time making it better. I'm using dnsmasq and dnsmasq can communicate with eth and wifi due to the Layer-3 protocol.
My tool is tested on the Pi2 running Arch Linux. The project

Not the answer you're looking for? Browse other questions tagged networking pi-3b+ dhcp or ask your own question.

16
Howto migrate from networking to systemd-networkd with dynamic failover
6
How to correctly restart wpa_supplicant debug with networkd-systemd?
1
Setup Wifi direct (wifi p2p) between dedicated pair of Raspberry Pi 3 B+ - One Group Owner, the other the client