SD card broken readonly switch, now I broke /boot, no USB keyboard in initramfs. Any way to write to card?

TL;DR: RPi won't boot, other computers check the R/O physical switch, the switch tab is long lost. I have a backup with previous, working state, but can't write it onto the SD card.

I have a RPi1, using an old SD card with only /boot on it; rest of the system is on a USB drive. There's kernel.img, and there's a custom initramfs (needed for / of type btrfs).

This is my cmdline.txt:

And a relevant part of config.txt:

So far, this worked well: the card reader on RPi doesn't check the R/O switch status, and the card is only written to at upgrade time. However, I have upgraded to 4.19.66, broke the initramfs in the process, and now it won't boot (I get an initramfs panic prompt).

What I did not try:

On many readers, it's enough to insert the SD card not all the way in, so that the pads make contact, but the place where the lock should be is still occupied by the edge of the card. The edge of the card will then activate the lock detection mechanism which allows writing.

Otherwise, the trick with the sticky tape is universal. Just make sure not to cover contacts with it. 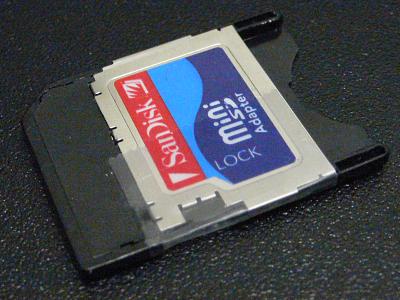 This is the same case as the RPi's reader: even though it does have the physical pin, the firmware doesn't report its state.

There is a physical way to force R/W status:

This is a bit tricky - the tape needs to be strong enough so it doesn't bend under the reader's R/W pin, but also thin enough that the card fits into the slot and can be pulled out again - this turned out to be the harder part.

The key word I was missing was "SD card: fixing a broken lock", which helped me to find a howto, with pictures.

Not the answer you're looking for? Browse other questions tagged boot sd-card or ask your own question.

0
My sdcards won't boot
2
Reading files with a custom kernel
0
Why does /dev/mmcblk0p2 work when PARTUUID doesn't?
1
Raspberry Pi Imager sets the boot partition in read only mode
0
Boot from read-only USB media
0
How to clone USB Boot drive to smaller SD Card