I followed https://medium.com/@patrick_ryan/building-opencv-4-10-on-raspian-buster-and-raspberry-pi4-64669bd2eb74 to install open-cv on my raspberry pi.

On using the make -j4 command it took approx 2 hours to reach till 100% but after that the process never completed. I restarted the pie again and ran the same command but still, it gets stuck at 100%. What should I do? 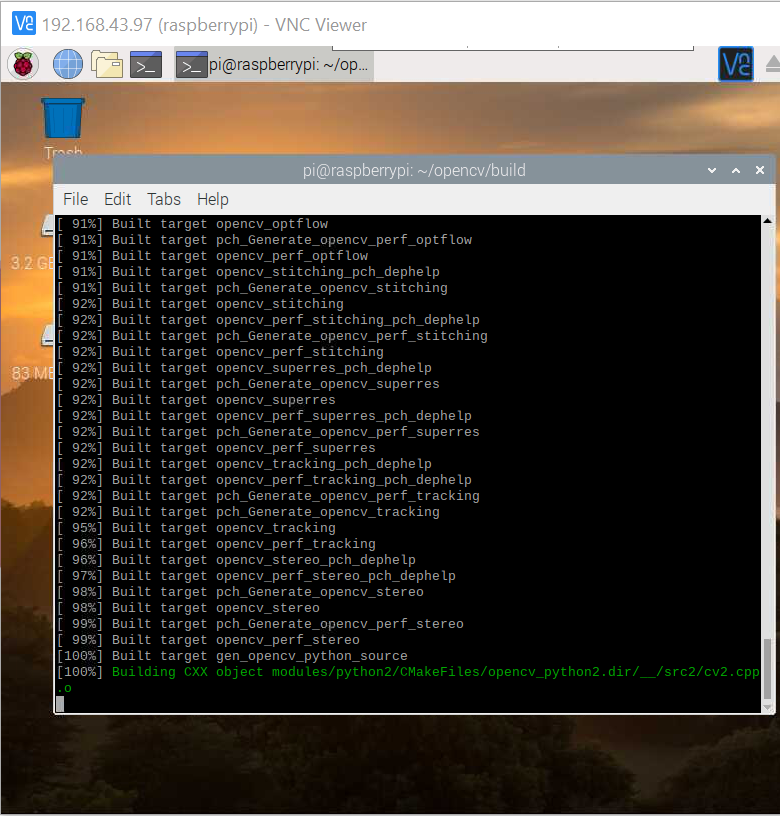 You don't tell us why do you want to compile OpenCV from source so I assume it is not necessary. We have seen many problems on this site doing it. You also try to compile for python version 2. This is nowadays only used for backward compatibility. It is strongly recommended to use up to date python3.

OpenCV is part of the default raspbian repository. Just installing it with apt works out of the box. How to do it you can look at Pre-Built openCV on raspbian Buster.

If the build process doesn't throw an error and keeps the CPU busy, I'd assume it's still working. I never tried to build OpenCV, but 2 hours doesn't seem like an extraordinary time. Building Firefox on an RPi 4 takes more than that.

If you didn't install any cooling, a thermally throttled CPU can take days to build something substantial. Running at extreme temperatures will also damage the board sooner or later.

Since you have restarted the system while a build was in progress, I'd recommend cleaning it up (make clean, or just scrap the whole folder and start from scratch) before you re-attempt a build.

Sorry, I couldn't follow the link. Compiling OpenCV from source may run into swap file limits. Check the value of the CONF_SWAPFILE in the file /etc/dphys-swapfile. You may want to increase it because the default Raspbian Buster setting (as before) is 100.

It can be difficult installing opencv on raspberry pi. A couple suggestions:

2) If suggestion 1 doesn't get you passes the ram stall; Try building with different opecv version. I generally get better results on the RPI when building with versions 3.4.

3) Make sure swap ram is configured properly. Adjusting the Swappiness could also help.

Not the answer you're looking for? Browse other questions tagged opencv pi-4 raspbian-buster or ask your own question.