I'm trying to light up an LED and play a buzzer noise at the same time. Here is my code so far:

and here is how my RBp is connected:

The LED lights up as expected but all I'm getting from the piezo is a very short static noise as if it's getting electricity. But no sustaining noise.

I don't think theres anything wrong with the code as I've seen multiple examples online that are basically identical and work with no issues. The buzzer I'm using is from the arduino starter kit if thats any help.

If anyone can help me figure out why it's not working that would be very appreciated!

My pizeo buzzer is no working, how to fix it?

(1) You seem to have connected Rpi's 40 pin header's 5V power to one end of the piezo, and one GPIO pin to other end of the piezo. It is worse than connecting a resistor in a similar way. Rpi GPIO cannot stand 5V, and might fry even you connect through a current limiting protect resistor, say 4k7.

(2) If you have connected a piezo, it is even worse. Piezo might oscillate, with a starting spike, though very short, say 10uS, might be as high as 30V, and might also fry your pi.

(3) And even if your pi has not yet fried, the piezo can pass a current as high as 30mA, which is beyond GPIO limit. So it might also fry your Rpi.

So you have already done 3 things to fry your Rpi. If your Rpi is not yet fried, I would suggest a better way, that is called active piezo buzzer (Appendix C below) 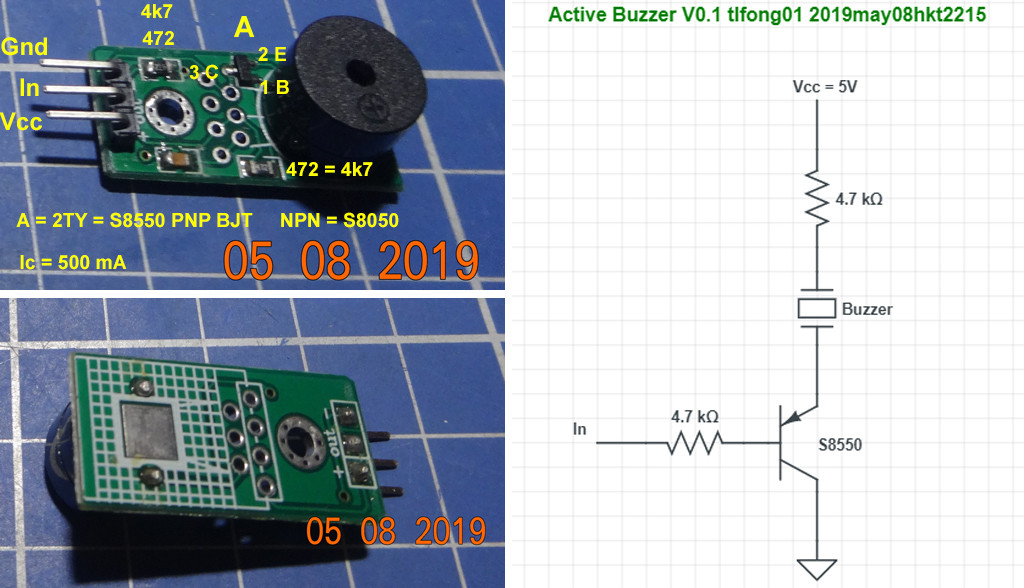 7
How do I connect a buzzer to GPIO?
2
Python script failing with AttributeError: LED instance has no attribute '__trunc__'
0
GPIO is not working, 5V working, 3.3 V working, Raspberry Pi B+
0
Resistors on the RPI GPIO
1
LEDS with RPI GPIO
0
Increase volume of Piezo Buzzer
1
GPIO Buzzer. Not sure how to do this
0
Use a single GPIO pin to activate both LED and buzzer
1
counter with tkinter