I'm trying to recompile kernel on my RPi3A+. Excecuting the following commands on clean Raspbian 9 (stretch):

After a loooong time I got this (sorry for the picture but I cannot capture it in another way): 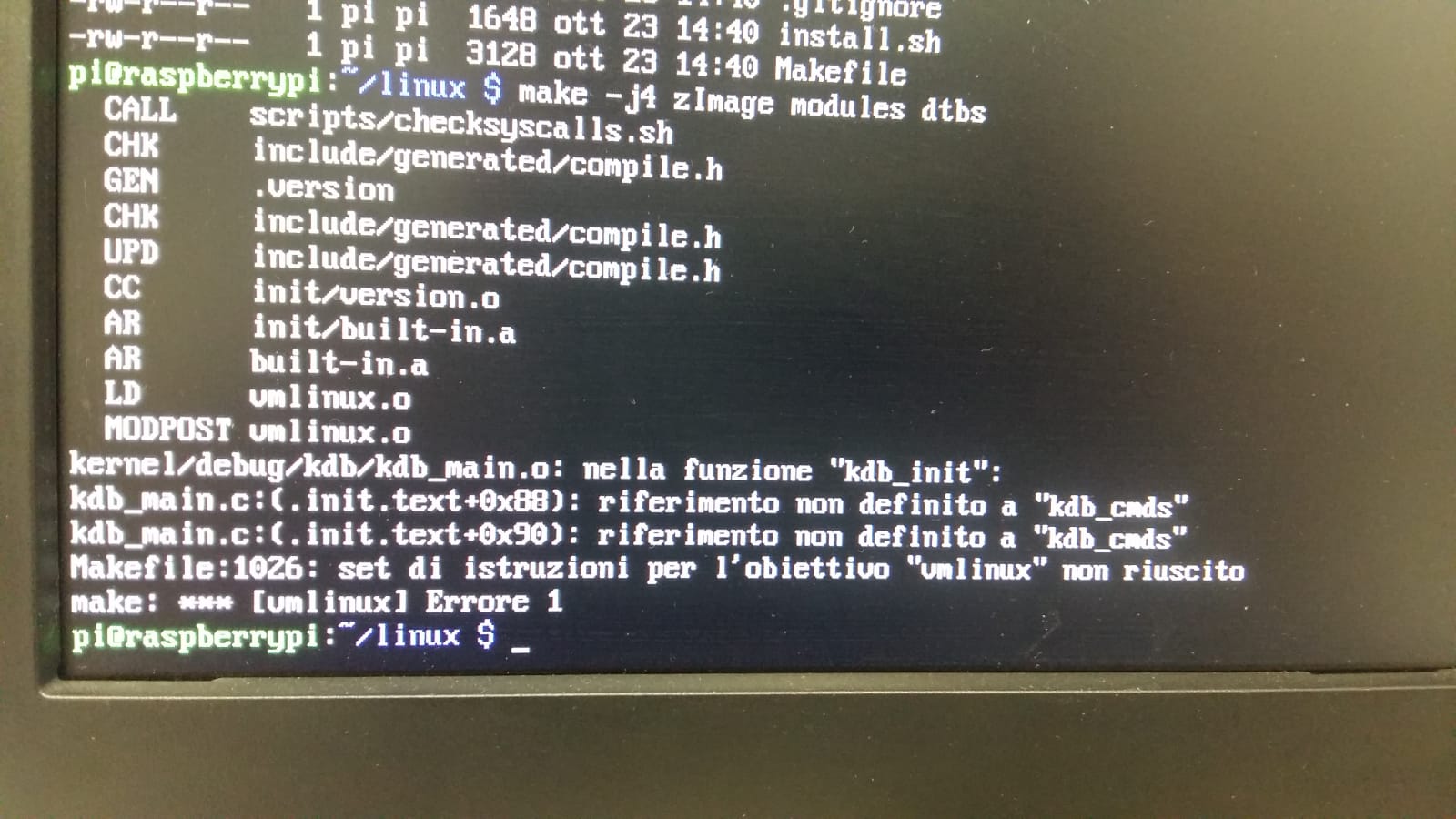 Unluckly we had set italian as locale and we cannot revert to english at this time anyway:

How can I fix this? I tried to google for kdb related compilation errors but it seems that it's never been reported.

Possibly some previous aborted attempt is causing a problem, because this series of steps worked for me, although it took several hours on a 3B+.1 As root:

This actually did fail on the first attempt because some kind of helper script wants to build something that requires apt install openssl-dev (the error has an explicit reference to an openssl header being missing). This is a bit weird as the vanilla kernel does not normally have any external dependencies besides libc.

I usually copy the kernel out manually; you can find that and the dtb/overlay stuff in arch/arm/boot:

If the build fails for some reason, you can try make clean, make mrproper, and/or make distclean; see make help output for details. If you use either of the last two, you may want to save your .config since that will be deleted.

Note that this doesn't include firmware; make firmware seems to do nothing. However, it should be fine to use the stuff provided by the distro, since firmware does not need to match exactly the kernel it was built with (as modules do), nor is it affected by the specific configuration (including platform, since firmware is not compiled for that, ie., you use the same stuff on the Pi as you would an x86 desktop, although the Pi firmware package does I think contain some stuff not included with the vanilla kernel).

Also note that because the Pi uses a simple bootloader that looks for the kernel based on a singular name in /boot, distro upgrades can overwrite your custom kernel. This is easy enough to avoid by giving the kernel a name that is not used by default (notice it was installed above as kernel7-X.img) and indicating that in /boot/config.txt:

Not having functional modules may be hard to notice because the default Pi kernel does not require any modules to boot and function normally to a great extent (including basic networking).

A way to avoid that is to compile the kernel with a custom tag that will then be used in labelling the module directory. The default pi configs already do this, eg. -v7, which you will notice is used in the /lib/module directories. Customize that via make menuconfig General setup -> Local version (in .config this is CONFIG_LOCALVERSION). Note this tag has nothing to do with the kernel binary name (kernel7-X.img in this case). The version tag is compiled in and used to find the proper modules directory.

Not the answer you're looking for? Browse other questions tagged raspbian pi-3 kernel pi-3a+ or ask your own question.