How to run a graphical app before console login in a systemd-nspawn'd container?

TL;DR I'm looking for a way to autostart graphical applications, without first requiring the user to manually login.
I'm improving my Vdesktop script that runs multiple versions of Raspbian on one Pi simultaneously using systemd-nspawn.

I am working towards building a GUI tool that manages SD cards and image files, as well as booting them.
The only hindrance to a GUI tool able to 'boot' a Raspbian image is the bothersome manual console login. 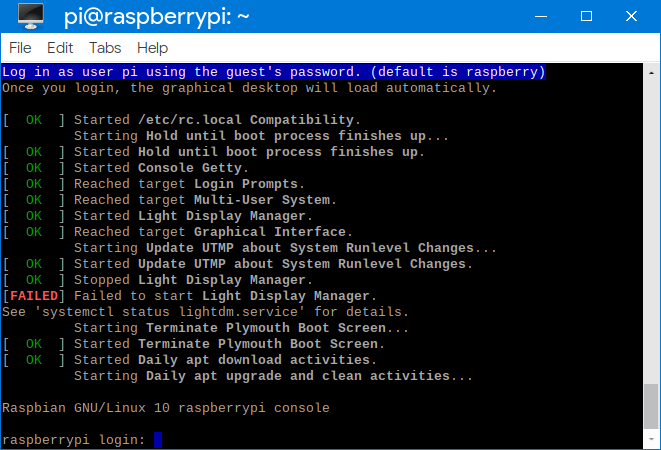 I'm looking for a way to autostart graphical applications, without first requiring the user to manually login.
Either getting the console to autologin (I've tried, I failed), or finding an autostart method that can run lxsession in the foreground, with no need for console login first.

I'd like to stay away from having the script automatically type in 'pi', and 'raspberry', because Vdesktop must work properly on a system whose Pi password has been changed.

There are probably a few ways to do this, but what I've done in the past is to first set up an auto-login service for the user account that would run the application:

Then in the user .profile, start an X session:

This may not be the best way, but it worked for me on an application that only had a graphic display and didn't require (or have) any user input. Note that this setup does rely on systemd.

I'm convinced that your problems stem from the fact that regular autologin methods rely on a real tty being available, while your guest system will have none (it will only have /dev/console which kind of emulates a terminal using stream redirection and the like, depending on the --console parameter of nspawnd). You don't seem to be able to start an X server on that, which is not surprising since it's not a real screen, so you need the guest system to use the X server of the host system which has already started.

The command line autologin should still work though. Perhaps you need to specify /dev/console as a terminal for agetty (instead of $TERM), or perhaps provide the guest system with a pseudo terminal (check out the -S option of xterm for instance).

You likely won't be able to run startx directly from this console, but the XDMCP protocol may do the trick. It should let your guest X server use the screen of the host system. On your host, you need to enable XDMCP support. Add the following to your lightdm.conf and restart:

Make a virtual networking interface between host and guest using --network-veth parameter of nspawnd, then inside your host system start the X server with

Not the answer you're looking for? Browse other questions tagged boot systemd-startup or ask your own question.