I am attempting to set up a Ad-Hoc Wifi network of multiple PIs , none of them are supposed to be connected to the Internet. I could configure one of the PIs to act as a Ad Hoc Wifi device which provides the Wifi access point with an SSID and a static IP address.

I configured the /etc/interfaces file with the following text:

I set up a static IP address (with the same subnet as the ad-hoc Pi) on the other raspberry pi by adding a line to the dhcpcd.conf file so I can connect to the ad-hoc Pi:

However, I cannot seem to connect to CTWifi by clicking on it even though it is showing up in the GUI. I tried to change the wpa_supplicant.conf file but that does not work either.

I also tried to set up a DHCP server on the ad-hoc Pi following this guide: https://spin.atomicobject.com/2013/04/22/raspberry-pi-wireless-communication/

I added the following lines to the dhcpd.conf file on the ad-hoc Pi:

It still does not work. I cannot seem to connect to the ad-hoc network through the Wifi GUI.

Any help will be appreciated. Thanks. 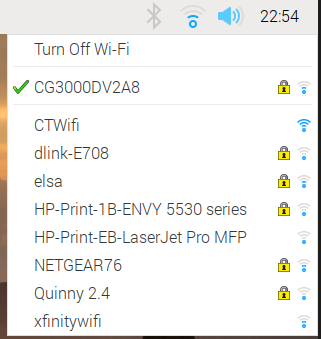 Not the answer you're looking for? Browse other questions tagged networking wifi dhcp static-ip or ask your own question.

0
Is is possible to remotely SSH into a RPI from iphone/ipad (using iSSH) when outside a wifi network?
0
Raspberry Pi wireless AP problems (static IP address)
0
RPi3: DHCP wlan0 with static eth0 doesn't work
1
How to connect two PI 3 to each other through ad-hoc connection?
0
Pi won't reload etc/network/interfaces: Won't switch back to DHCP after static IP removed and networking restarted
3
How do I configure dhcpcd to call wpa_supplicant for a specific interface?
0
3G USB dongle together with LAN cable/port on a RaspberryPi
0
Cannot connect to a DHCP server
0
i created a wifi access point on my raspberry pi but it doesn't serve internet to clients why does this happen