I know that ARM Pointer Authentication feature is supported on all ARMv8.3-A processors, and this version was presented at 10/2016. RPi 4 Model B was released last year so there is a good chance the version of the SoC processor supports this feature, but in all the specs I found the processor version is just ARMv8-A, without mentioning the sub-section.

I'm a Software Security researcher, and I'm looking specifically for the Pointer Authentication feature so it's important to me to confirm its exists. Thanks in advance.

EDIT: The syntax for using this feature is described in the picture below: 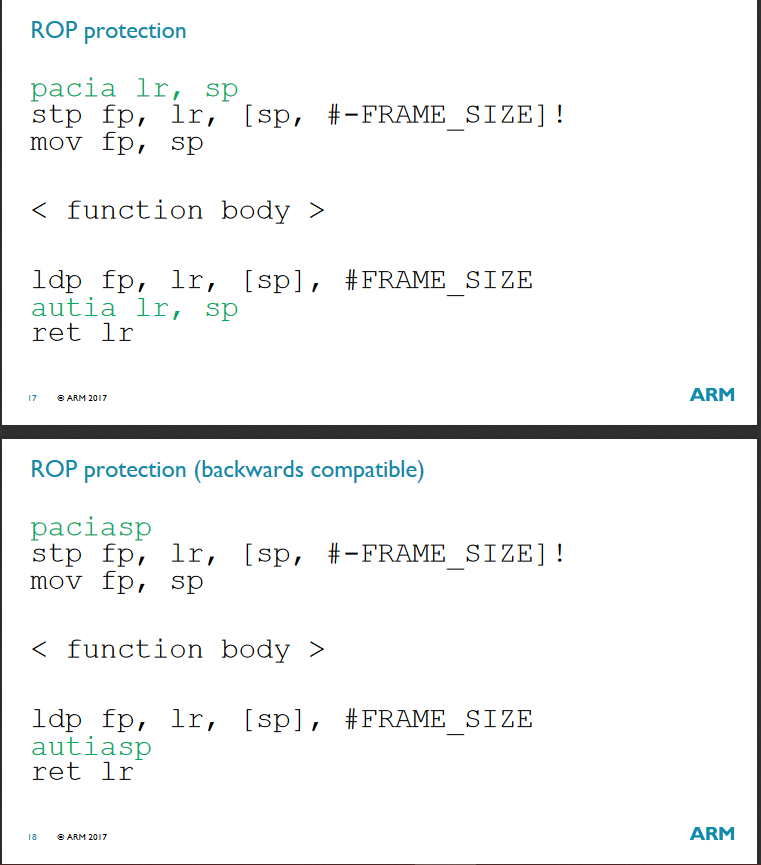 According to the Raspberry Pi documentation, the RPi 4B uses a Cortex A72, which was released in 2016. According to this list, it is based on ARMv8.0-A, so it should not include your feature. In fact, no core released by ARM directly supports ARMv8.3‑A.

This paper mentions there is no open and public board that supports PAC instructions. iPhone A12 is the only option that is proprietary. Therefore, the paper has simulated some instructions and tested on Raspberry Pi 4.

Not the answer you're looking for? Browse other questions tagged pi-4 security arm or ask your own question.

31
What BIOS does Raspberry Pi use?
1
Does a Raspberry Pi 2 Model B (quad-core ARM Cortex-A7) have 4 program counters?
2
What factor might have affected SSH host authentication?
1
Ubuntu 16LTS OR MongoDB v3.4 on Raspberry Pi 3
0
firmata_test does not start
2
Does the Pi 3 support Vulkan?
3
How can I create an encrypted container on a Raspberry Pi 4?
2
Does Raspberry Pi 4 processor support AES-NI instructions?
0
Why does Rasbian report the Cortex-A72 CPU of the Raspberry 4 as ARMv7?