UPDATE: As I suspected lately, Ubuntu Server actually boots up. Nothing worked until I tried using an actual HDMI monitor instead of an HDTV or VGA monitor. I suppose the TV will work once I install a desktop environment. Regardless, I still need to get it to work on VGA. I updated the title (is that allowed) and tags accordingly.

First off I know this question must be turning up a lot on forums. I'm aware of the possibility that this might get turned down, but I'll take my chances.

On every attempt to boot my Raspberry Pi with an SD card flashed with Ubuntu 19.10, all I get is this weird looking display as if the monitor is having a stroke: 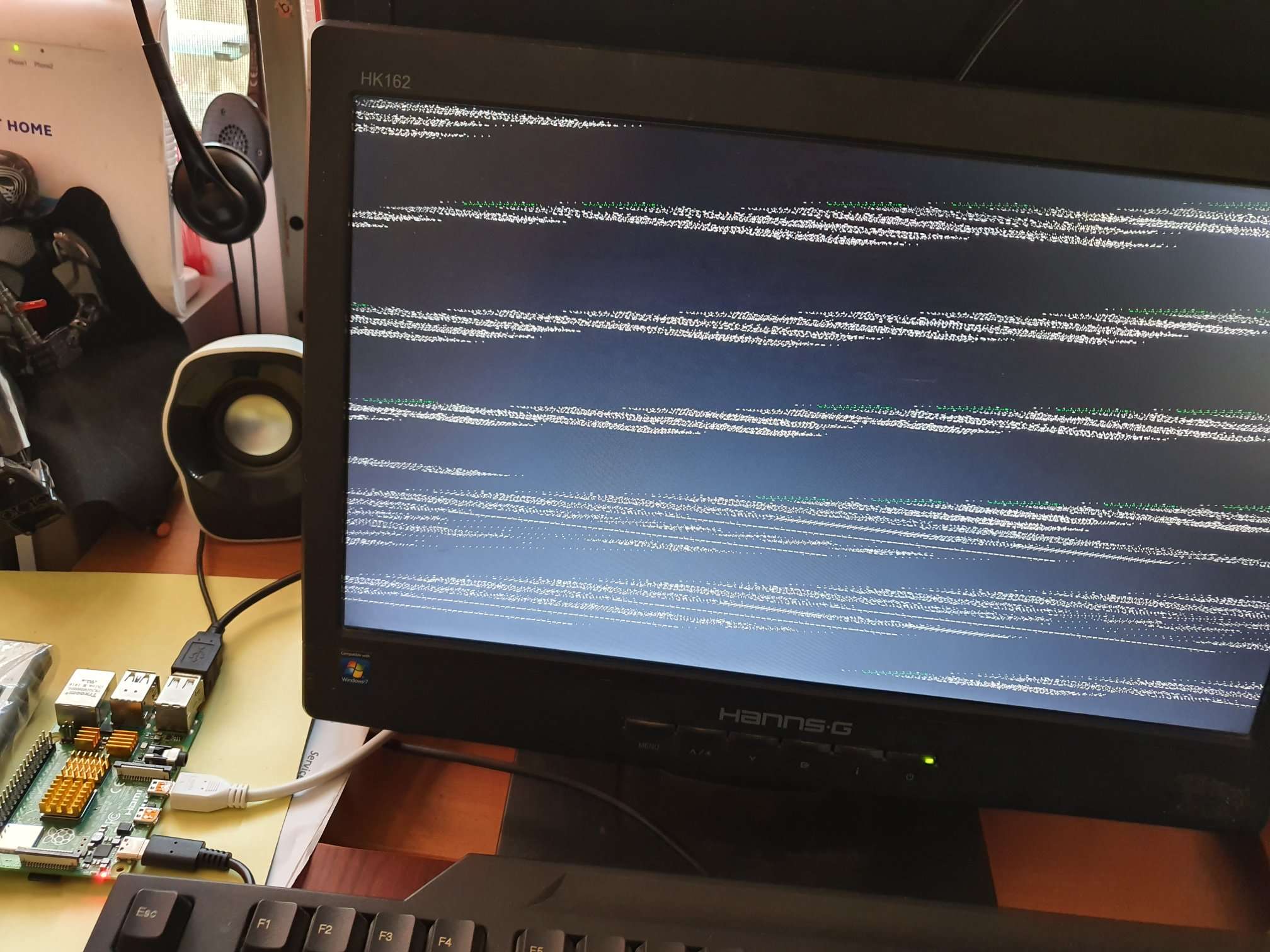 The Green LED would blink erratically as those white diagonal smudges morph indefinitely, until the LED stops blinking and turns off. At some point some of the streaks are green and red, coincidental with the raspberry pi logo.

I have the Rpi4 4GB RAM version.

I'm using a newly bought 32GB SanDisk Extreme for the Ubuntu. I have another SD card which has Raspbian on it which is working perfectly well with my current display setup--I'm using an old monitor that accepts VGA only. I have a brand-less uHDMI-to-VGA adapter that I've been using with my Raspbian.

I'm strictly following the instructions from Canonical to install Ubuntu.

On each attempt, I format the SD card to FAT32 on Windows using SDCardFormatter, then flash the image from either Raspbian (sudo dd) or Windows (Win32DiskImager), again following Canonical's instructions. I've tried flashing both the 32-bit and 64-bit images. Result is the same for both HDMI ports.

In total I've had 6 attempts, all of which resulted as depicted in the image above.

I've even tried hooking it up to an hdtv, as expected it won't even display anything.

Is there a step I could be missing here that is somehow not mentioned in the instructions?

For one, I did not modify usrcfg.txt param total_mem=3072. But this doesn't seem relevant to the symptom.

It's been really frustrating but I'm willing to try anything else.

EDIT: As suggested by one contributor below, I tried to modify config.txt and put the lines

I also put the same lines in usrcfg.txt. I even increased config_hdmi_boost setting to =9. The problem persists, that is, my VGA monitor would still display the distorted figures, and my HDMI HDTV would not detect anything. I'm starting to think that the distorted figures on the VGA monitor are actually manifestations of the Ubuntu boot up screen, albeit corrupted.

The same issue happened to me today, so I started finding a solution and found your question.

Open your config.txt file from the boot and the below lines.

Try the alternate HDMI port. It worked for me.

I had the same problem and I solved it in a very simple way: put your SD card into another OS, then open the file "usercfg.txt" and add this line to the end of the file:

Save and done! Tell me if it worked for you!

Add this to you config.txt or on usercfg.txt

Not the answer you're looking for? Browse other questions tagged boot display pi-4 ubuntu or ask your own question.

0
Can't get VGA monitor to display anything with passive adapter
1
config.txt - Should I use CEA or DMT for different types of VGA monitors?
1
No display from Raspberry Pi when HDMI to VGA adapter used with HDMI extension cable
9
Ubuntu server on RPI 4 boot hangs on cloud init
0
Pi not working on my VGA monitor
1
My raspberry pi wont boot after flashing an sd card it with ubuntu server
0
How can I display Ubuntu Server 21.04 on a Waveshare 3.5" LCD display?