Can a USB-C Power Bank be used to power a Pi 4 for off-grid or mobile uses where the Pi cannot be tethered to either a mains electric socket or a POE switch?

Many of my contributions to this forum have centered around innovative ways to power a Pi which is awkwardly out of reach of a mains socket, specifically using POE. But what do you do if there's no mains power source at all, ie: Pi used in off-grid conditions or mobile use where the Pi is not stationary?

As the Pi 4 now had a USB-C Power socket, I thought it would be useful to revisit using a USB Power Bank as a power source which although worked with earlier Pi models threw under-voltage warnings.

Yes, USB-C Power Banks CAN be used to power a Pi 4 without triggering an under-voltage alert, but with following notes:

If interested in HOW my conclusions reached, please continue reading...

NOTE: Only (1) snap for each high & low value for each test will be shown

Equipment used in tests was employed because I had it in my office at hand. There may be better or worse Power Banks & USB-C cables then those used in my tests.

NOTE: Both USB-C cables were end-to-end USB-C with no adapters used between the Pi or nor the USB Powerbank 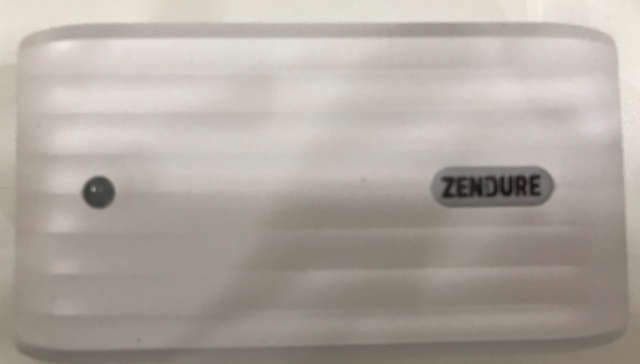 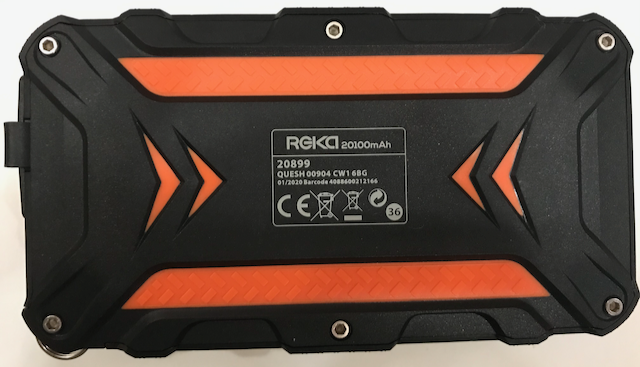 5v was LOWEST voltage seen during monitoring period, while 1.18a was HIGHEST amperage range observed. 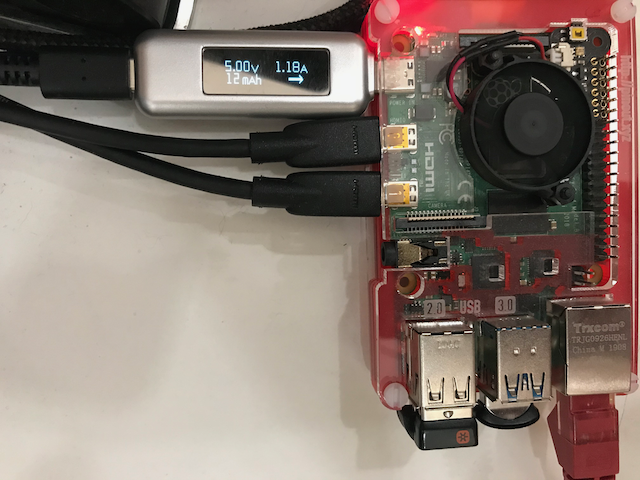 5.05v was HIGHEST voltage seen, while 1.15-16a tended to be LOWEST amperage observed. 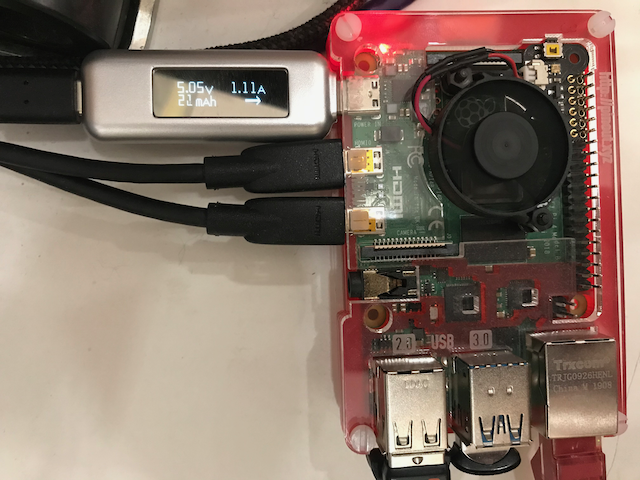 Cable used to connect each Power Bank to Pi 4: Zendure 21" 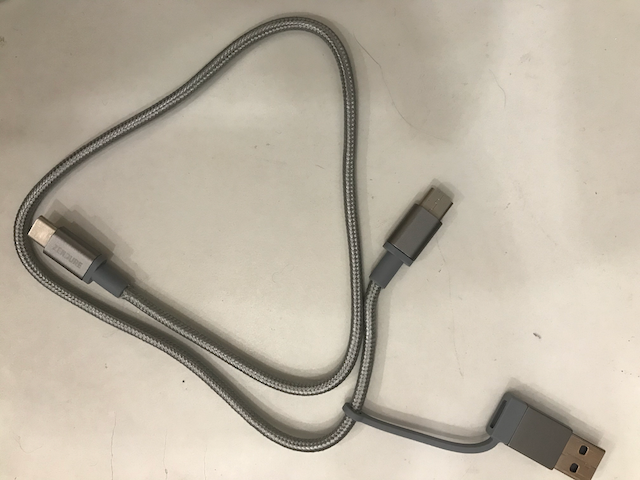 Overall Results: No Low Voltage warnings observed on EITHER USB -C POWER BANK despite not quite reaching 5v. Also, best voltage performance achieved using the shorter 21" Zendure USB-C cable over the 40" Reka one.

4.78v was LOWEST voltage seen, while 1.18a was HIGHEST amperage range observed 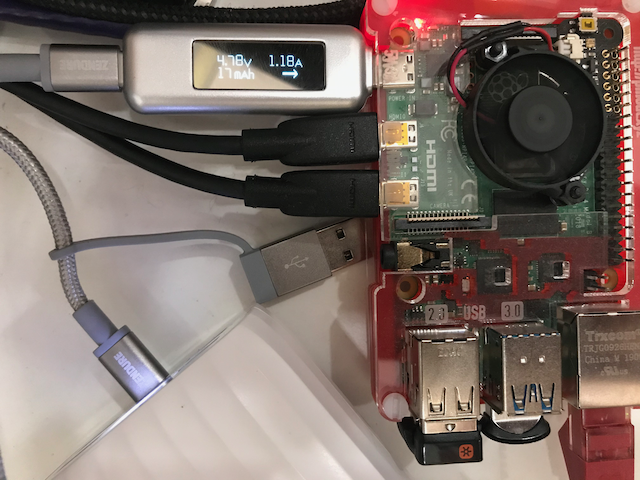 4.83v was HIGHEST voltage seen, while 1.16a was LOWEST amperage range observed 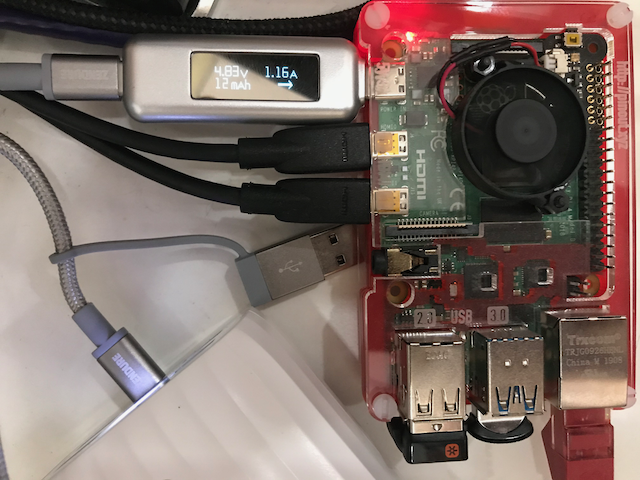 4.82v was LOWEST voltage seen, while 1.17a was LOWEST amperage range observed 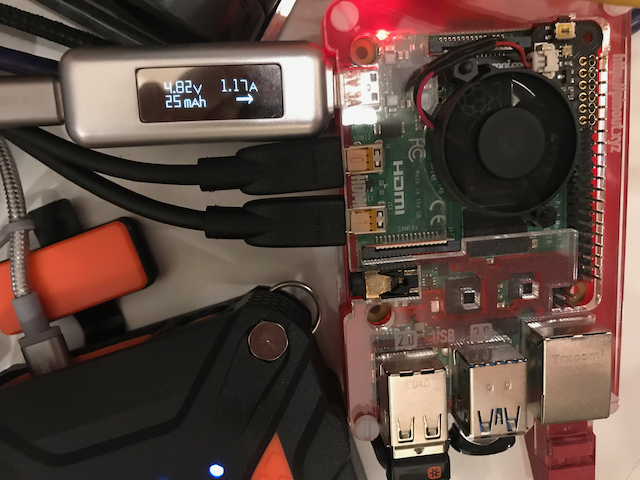 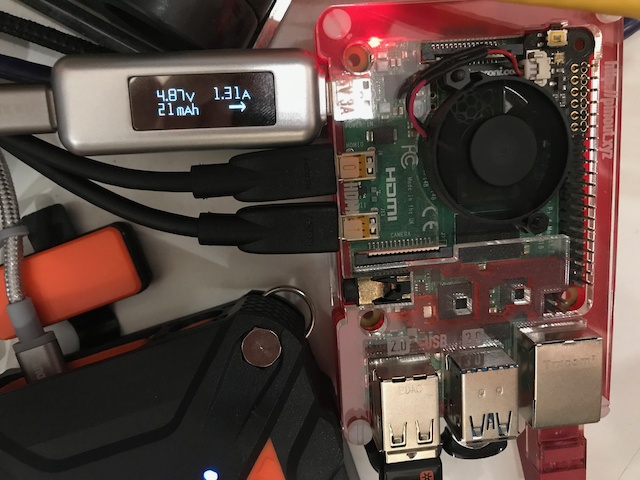 Cable used to connect each Power Bank to Pi 4: Reka 40" 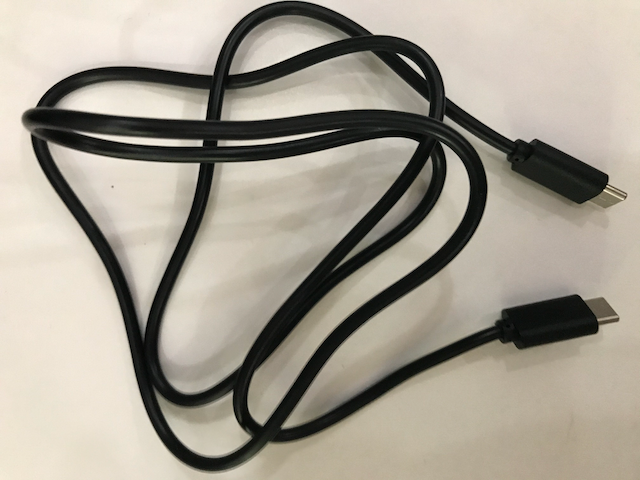 Overall Results: A palpable reduction in voltage from using the Reka cable which at 40" was nearly TWICE as long as the Zendure's (21"). This was enough for the Pi to throw a Low Voltage warning when connected to the Zendure Power Bank using the longer cable. However, the Pi 4 did NOT show the dreaded "Lightning bolt" when connected to Reka Power Bank using it's own 40" USB-C cable.

4.71v was LOWEST voltage during monitoring period, while 1.19a was HIGHEST amperage range observed. 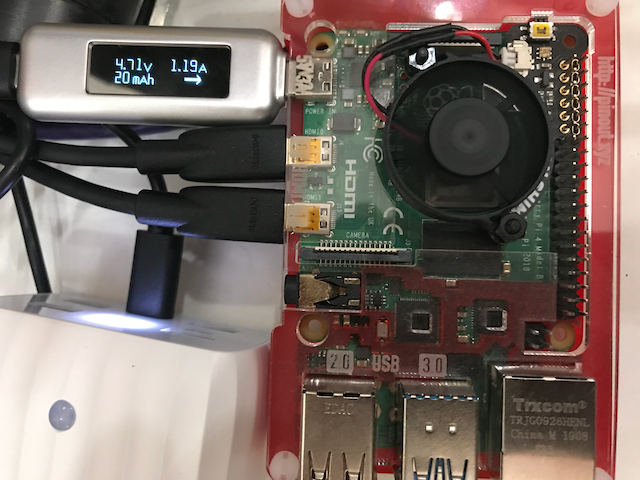 4.73v was HIGHEST voltage during monitoring period, while 1.18a was LOWEST amperage range observed. 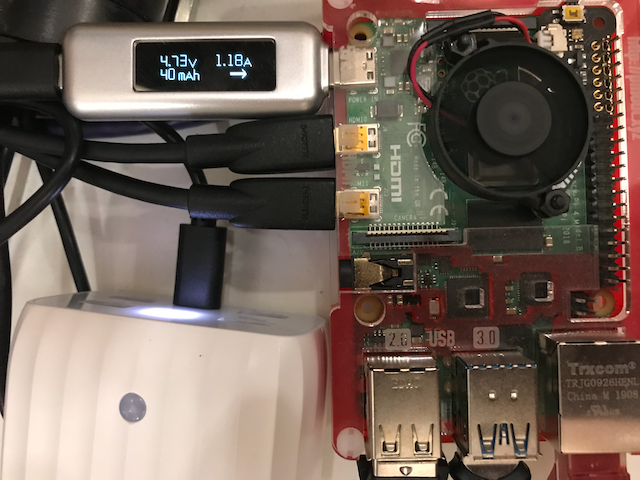 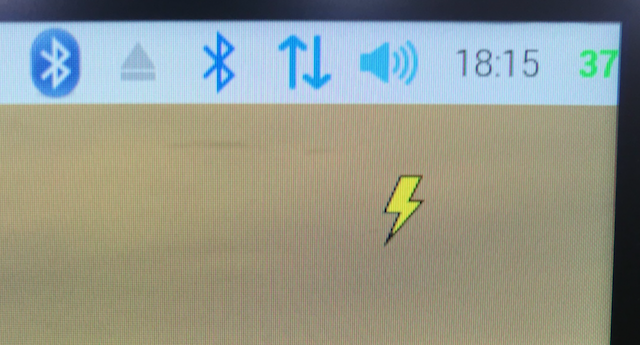 4.77v was LOWEST voltage during monitoring period, while 1.19a was LOWEST amperage range observed. 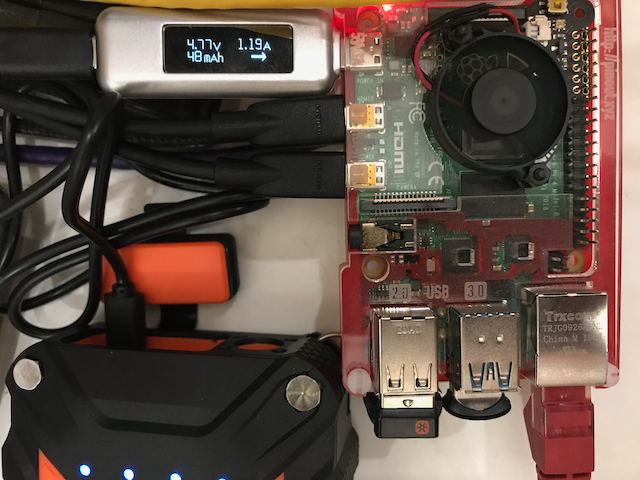 4.81v was HIGHEST voltage during monitoring period, while 1.21a (1.20a shown)was HIGHEST amperage range observed. 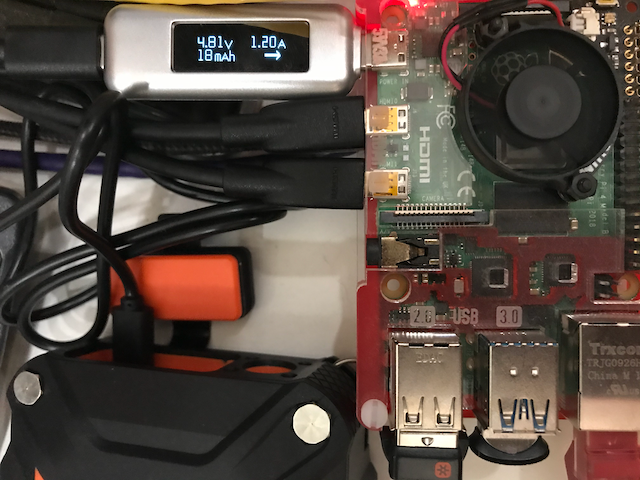 Overall Results: Since we're using a battery- a DC power source- and negative resistance is at play, less amperage sees increased voltage getting us closer to 5v the Pi wants. I'm not an electrical engineer, but this appears to be the relationship evidenced in my tests results shown below.

Remark that now we can achieve 4.86 volts with the Zendure Power Bank whereas the best we managed with the HDMI monitors was 4.83v when amperage was 1.16a 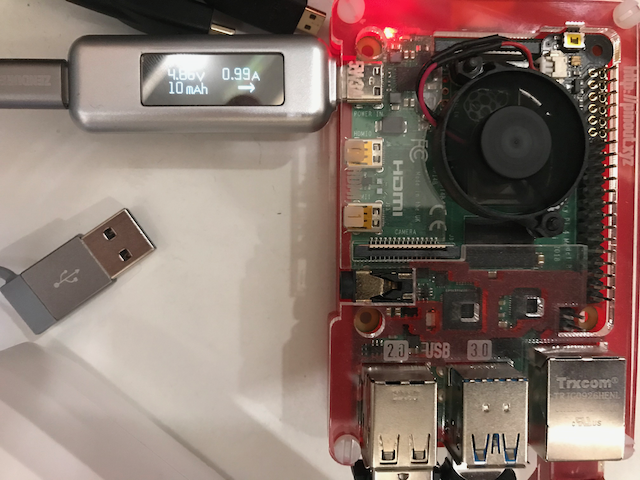 With the Reka using the Zendure cable we are now achieving 4.92v at 0.96 a whereas before with both HDMI cables connected the best we managed was 4.87v when amperage was 1.31a. Getting within touching distance of 5v now... 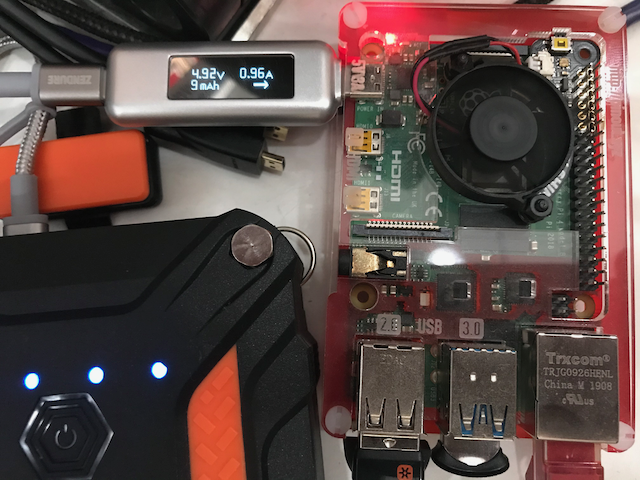 It very much appears that using short, thick-guage USB-C cables and a quality USB-C Power Bank you can power a Pi 4 while avoiding the "Under Voltage" warnings. However, although I managed to get close to 5 volts with my test bench, I never fully managed to attain it. YMMV depending on your own combination of Power Bank & USB-C cables-

To add just a minor point to F1Linux's answer...

Yet another caveat to the answer is that you must use a NON e-marked USB-C cable.

Not the answer you're looking for? Browse other questions tagged power-supply pi-4 battery alternative-power usb-c or ask your own question.

2
battery power for RPI and IR LED bank?
31
Will any external battery power a Raspberry Pi?
1
Backup power for pi 2 model b
1
Can I power a RPi3 from its USB ports?
1
I would like to add a battery to my Raspberry Pi 4. Can i do this by soldering to tp7, tp12, or tp1 on the underside of the board?
0
Is there a way to use the USB-C port as power and for something else?