There are several posts that say a Pi Zero can be connected to another computer with USB to enable networking (e.g. Linux host, Windows host or https://www.circuitbasics.com/raspberry-pi-zero-ethernet-gadget/).

The USB connection provides both power and data. I have also followed this question Headless Pi Zero SSH access over USB

They say, you need to change two files in the boot partition of the Pi SD card:

I have done all of that, but am still unable to connect.

On investigation, the Pi is corrupting the file cmdline.txt. I have tried setting it to:

and, reordering the parameters:

Both times, after a failed attempt to boot the Pi, I found the file contained

My first thought was that the file was truncated after the new parameter, so I moved the new bit to the end, but that made no difference.

Has anyone else seen this corruption? Any ideas of how to progress?

The Pi Zero appeared to boot – the green LED flashed for a few seconds, then stayed on.

On the host, lsusb has a line

avahi-daemon is running on the host, rndis is installed (several copies in /usr/src/linux-headers-[version]-generic/include/config/).

There are no relevant messages in dmesg, so I don’t think it’s a firewall issue.

EDIT - It's not file corruption

Thanks to @Milliways for confirming the file is not corrupt, so that line of investigation led nowhere.

Does anyone have any other ideas?

In case it's not clear, I have a Pi Zero, without wifi or ethernet. As it is headless, I can't do anything until I get ssh to work - except by mounting the SD card on my Linux host. Ethernet over USB OTG is a fundamental part of the project this is part of.

I wrote a short debug script and called it from /etc/rc.local (please don't be offended, it's only temporary and the easiest way to run it).

The IP address of my host is not shown.

Further research uncovered this post, where there is a hint that lack of connectivity is caused by a bug in Raspbian Stretch. The post suggests using the older Jessie version (from June 2017).

I have flashed the latest Buster (2020-02-13-raspbian-buster-lite.img). Is it possible the Stretch bug (if that is what it is) is still present in Buster? I can find no Raspbian bug list or release notes. I don’t have time to try to download and flash a Jessie image, but may consider it later.

This is as designed!

Is there to resize the root partition on 1st boot.

There are numerous settings that need to be manually configured BEFORE you can start fiddling with it. Attempting to do so BEFORE initial boot is an exercise in futility.

I have experienced the same issue using Ubuntu 20.04 as the host pc.

I managed to get a connection to my raspberry pi by changing the network manager's IPv4 Method to Link-Local Only in Network Manager.

This then allowed the connection to complete and I could then ssh into the raspberry pi using the raspberrypi.local address. 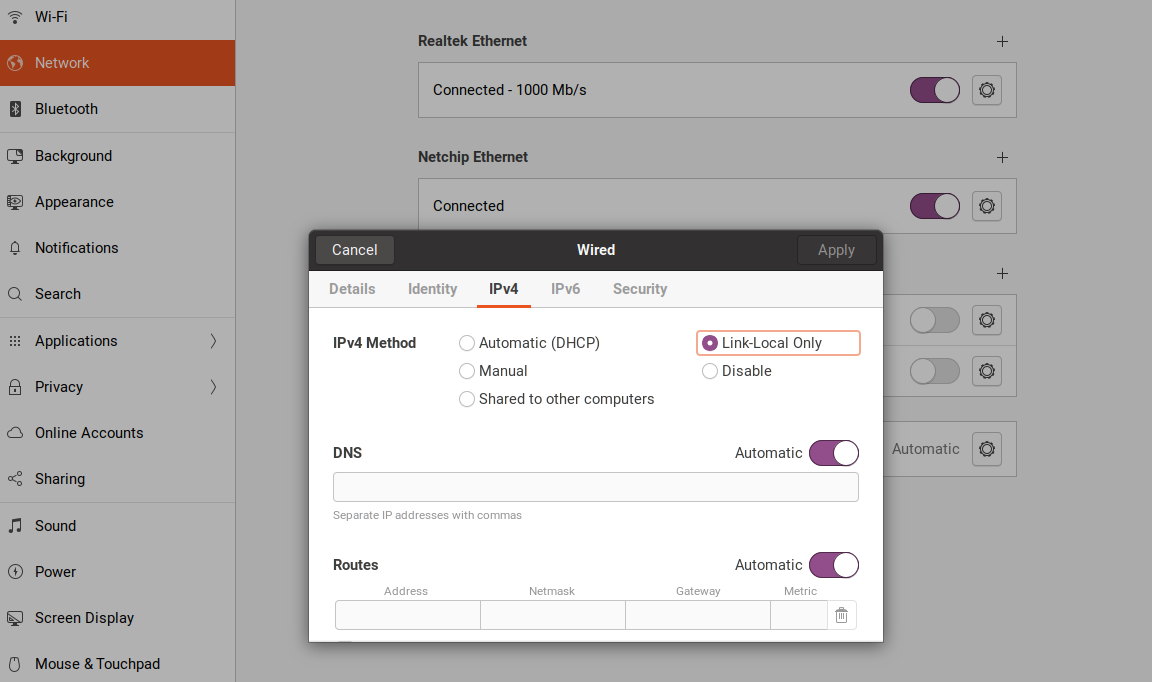 I'm still working on getting network sharing working so that the raspberry pi can then use the host's internet connection.

Do as gilesp wrote above about setting the IPv4 Settings --> Method to Link-Local.

Time is the enemy of all tutorials. Windows 10 doesn't ship with the necessary RNDIS driver. You'll have to install it manually. See https://www.factoryforward.com/pi-zero-w-headless-setup-windows10-rndis-driver-issue-resolved/ for a guide.

Not the answer you're looking for? Browse other questions tagged usb pi-zero boot-issues otg or ask your own question.

7
Headless Pi Zero SSH access over USB
1
Raspberry Pi Zero W Finding IP headless?
1
Is it possible to upgrade Raspian without running it on a Pi?