I'm trying to mock a BLE connection between and Android phone and a HID BLE mouse by using bluez 5.50 on a Raspberry Pi 3 Model B+ to create a mock HID BLE mouse. I've managed to advertise the device as a HID, but it still isn't appearing on on the Bluetooth menu of the Android device. I've used the nRF Toolbox app to confirm that the device is at definitely visible. I've also used an Ellisys Bluetooth Analyzer to sniff the traffic and I can see the following in the Advertiser. 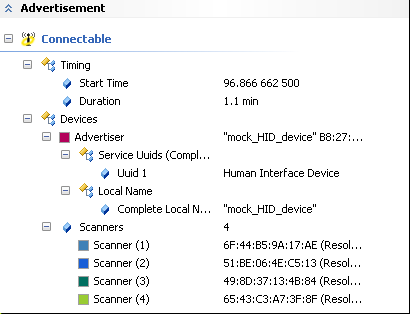 I've compared it to a Mad Catz R.A.T.M. BLE mouse which has the following Advertiser. 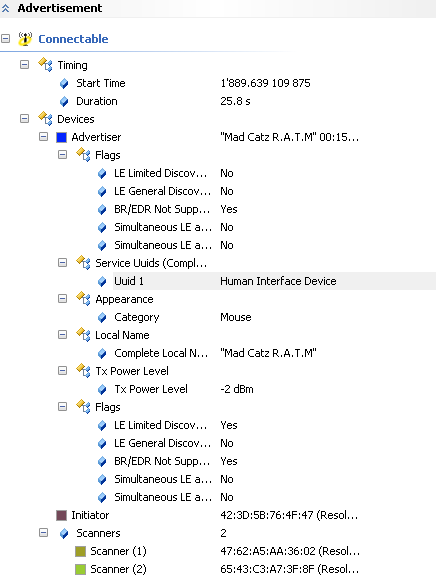 I've managed to add the Mouse category as an Appearance object by adding the below function to the Advertisement class in the example_advertisement.py file which communicates with the advertisement-api in bluez.

However, I can't seem to find a way to add a Flag object. Does anyone know if this is possible with bluez? Or if there is something else I'm missing that would make my mock device appear on the Android Bluetooth menu?

If there's any necessary info I'm missing from above just let me know, as this is my first time using a Raspberry Pi. Thanks in advance.

Browse other questions tagged bluetooth android bluez hid or ask your own question.

2
What is the “standard” SDK to access Bluetooth Low Energy on the RPi3?
5
How to Decode TPMS Sensor data through RPi3 Bluetooth
2
Rpi Zero W - How to automatically accept bluetooth pairing and log mac and info request?
1
Develop a communicattion between a Raspberry with BLE server and a Raspberry with BLE client
3
Raspberry Pi 3B+ BLE peripheral : Android can't retrieve services list, OK with iPhone and Win10
0
How to read a string from a file and advertise as a beacon?
1
BlueZ with Raspberry Pi 3