Connect switch to rpi eth1 and provide a custom dns

I am having issues finding the correct approach to take with my RPI setup. I have a router that does not let me disable DHCP and subsequently wont let me modify the DNS associated.

What I have done so far? I am able to setup a bridge between eth0 and eth1 like so:

This effectively has let me create a bridge and provides the DHCP from the router over eth1 to all computers connected to the switch.

The problem now is that even if i set the dns in a static way of eth1,br0 or on eth0 it changes only for the RPI not for any computers connected to the switch on eth1.

Whilst the dns-nameserver works on the RPI itself, as mentioned all machines connected via eth1, irrelevant of if i define a nameserver for all interfaces seems to be served directly by the router:

here is a rough diagram, (minus the no connection part on the pc, as it now works): 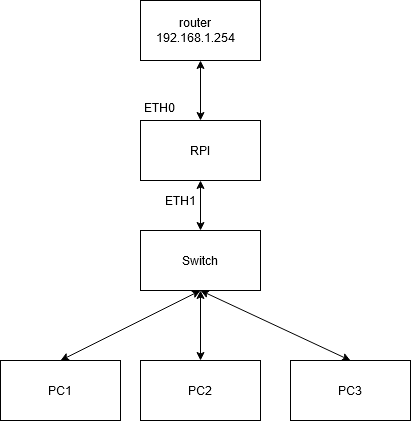 Any help would be appreciated.

I will explain in short how a DHCP server works together with a DNS server to show what is possible for your problem. A network client requests an ip address from the DHCP server with its network name. So the DHCP server knows name and ip address of the client. It gives this information with DNS update records to the DNS server, but it must know what DNS server it has to inform. This is by configuration. If you cannot reconfigure this setup, you are lost with it.

Not the answer you're looking for? Browse other questions tagged networking dhcp ethernet-port dns or ask your own question.

8
Wifi works, ssh can connect, but cannot connect out to the internet, cannot ping internal machines
0
Bridge eth0 and eth1 and run dnsmasq
2
Unable to connect WiFi to the Pi
4
RPi as Internet Gateway/Bridge
0
Can't ping or reach anything outside of home network
1
Can't set eth0 static IP or gateway using DHCPD.conf or /etc/network/interfaces
1
Configure Rpi as router - error when starting network and DHCP interfaces
3
How can I make dhcpcd ignore an interface?
2
Setting static IP for eth0 without router or dhcp