When I use select + X buttons on my game-pad to bring up the menu and select Port 1 Controls I get this choice: 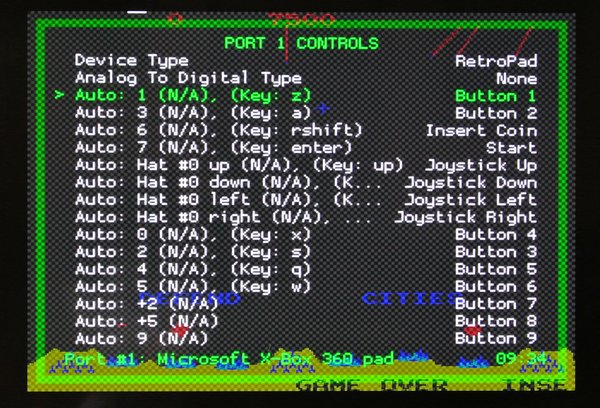 On the left should be the name of an input used by the game, For example Missile Command's Fire button for Base Alpha ought to be something like Player 1 Button 2 (or abbreviated P1 Button 2) but there's nothing there that I can recognise. So how do I work out which in-game function corresponds to Auto:1 (N/A), (Key: z)?

On the right should be the name of a physical button (or other input) on the "RetroPad" that retroPie maps your actual game-controller to. For example Joy 1 Y. but there's nothing there I recognise. You can cycle through a list but it is limited to the values shown in that column. So how do I know which of Button 1 through Button 9 is my game-pad's Y button?

How do I reconfigure my controls for a game?

There are ways to make sense of this RetroArch dialog but it may be easier to instead use the emulator's control mapping - in my case MAME's.

See below for much more detail:

From what I have read, the meaning of the text in the left column is

I edited the appropriate one, it had contents such as

after each such line I added a label line such as

after saving the file I used cd and emulationstation commands to restart EmulationStation, then went back into the game and brought up RetroArch's RGUI menu, then selected Controls and Port 1 Controls. 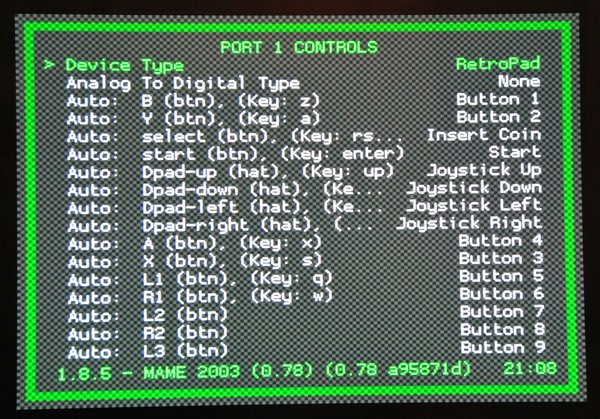 (Thinking about this later, Since the numbers on the right are assigned when you press each controller button in turn on EmulationStation's Configure Input menu option, so you can infer what they mean once the left side is clear)

I needed to find out what is meant by "Button 6" on the right hand side. I found the easiest way is to quit EmulationStation to a command line and run jstest /dev/input/js0. It shows a line of Analogue control numbers and Button numbers with a value for each (numeric or on/off). Something like

You can then press each button on your gamepad and see which value changes. By doing this I could see that pressing R1 changes 7:off to 7:on. So R1 (right shoulder button) is button 7.

I noted down the number and value corresponding to each control on my gamepad. These numbers are what is shown on the right of the retroArch (RGUI) "Port 1 Controls" dialogue shown above (and in the question).

(Thinking about this later, I suspect this isn't helpful, it tells me the button numbers for my physical controller, not for the virtual "Retropad")

This should make it possible to swap or reassign controls in retroArch - but I found a method that was easier for me.

because MAME only shows a line for each control used in this specific game, it is easy to deduce that the left-hand side labels on the above three lines are for Missile Command's three "Fire" buttons for Omega, Delta and Alpha bases respectively.

Then you can use the Dpad to highlight a line, press the gamepad's A button to assign a new value and then press the appropriate control on the gamepad to assign that gamepad control to the game-function on the left.

For me this proved to be the easiest way to reassign buttons for a specific arcade game.

Obviously somewhere MAME has a config file that translates "Button 4" back into the more meaningful "JOYPAD1-Y". This means it is easier to ignore the RetroArch control assignment dialogs and instead use MAME's menus to make changes. Then I never have to wonder what "Button 4" means or what "Auto: 0" means.

According to this page, Y would be Button 4.

1
How to overwrite the inputs in Retropie for specific emulator/rom?

0
How do I change the default permissions for device files (e.g. a gamepad)?
2
How to define keys for changing pages of ROM/game list in an emulator for RetroPie?
0
Microsoft Xbox 360 pad and Kodi mapping issues - Retropie 4.0
1
ESD Protection for RetroPi Arcade Cabinet Setup
1
How to overwrite the inputs in Retropie for specific emulator/rom?
1
Where to put local movie files for Kodi on Retropie?
0
Games won’t load in MAME 2003 (Retropie)