How to get raspberry pi Ip with only Ethernet cable and my window laptop. No internet connection?

after getting Ip I will be able to run remote desktop client.

I tried using ipconfig below is the pic 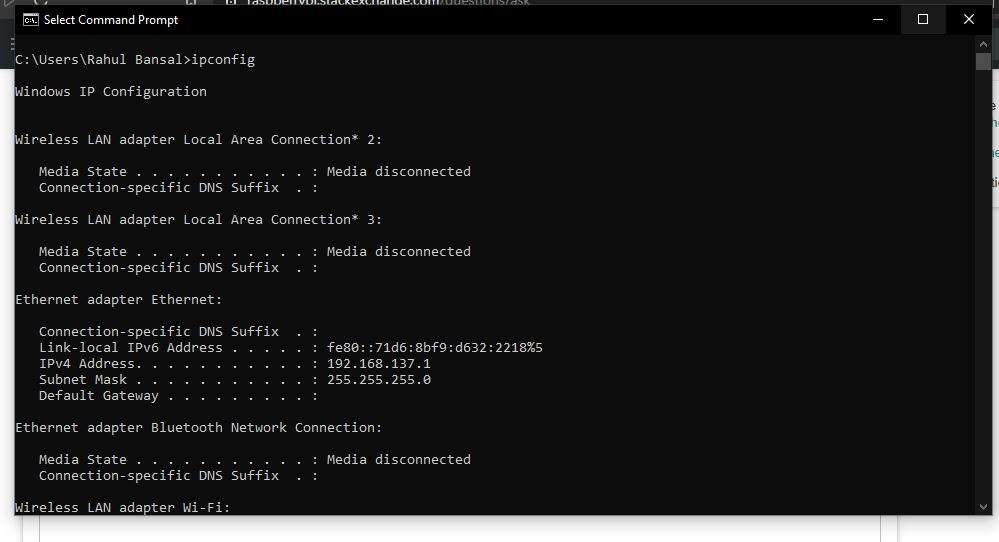 but the given Ip didn't work on mobaxterm SSH client.

So, how to get the private Ip which will work in that SSH client.

The Pi will get an IP address in at least two possible ways: 1) By using DHCP communication with a DHCP server (usually on the closest router).
2) By static configuration in the file /etc/dhcpcd.conf

In either case, the pi IP address can be found by the ifconfig command on the pi. Look specifically for the eth0 area in the output

The Pi will generally communicate with your laptop by having them both connected to an ethernet switch. If it is only a switch and not a router (or if there is no router also connected to the switch), there may not be anything to respond to a DHCP request, but you can still configure static IP addresses and get the pi and the laptop to communicate.

If the pi and the laptop are directly connected by a dedicated ethernet cable (and not to any switch), it used to require a crossover cable (not sure if it still does) and would have to use static IPs.

Not the answer you're looking for? Browse other questions tagged networking ethernet remote desktop or ask your own question.

10
How to debug no Internet connection?
1
Internet and Remote Acess via Wi-Fi & Ethernet Cable
1
Pi is connected to laptop via ethernet cable, but ifconfig is showing only l0 and eth0 , not wlan0?
1
Why can't my Raspberry Pi get Internet access from laptop via ethernet?
2
Raspberry pi not detected using direct Ethernet connection
1
Direct connection to Pi with usb-to-ethernet adapter possible?
1
How to connect a ethernet device(having its own static I.p and netmask) via internet by my laptop?
1
How to connect to the internet using an Ethernet cable