I have a device with a built in voltage divider and opto-isolator. I need to send a pulse to from the RPi GPIO output to the input pin in the circuit.

The output from the optic-isolator goes to an input pin on a microcontroller in the device (not shown).

How can I bring the input voltage down to a safe level that I can plug in to the GPIO output pins?

What happens if there is a higher voltage (I.e. 4.5V) on the GPIO output pin? When the GPIO output turns on, will current flow in reverse and damage the PI? When it’s off will it sink the 4.5V to 0V? 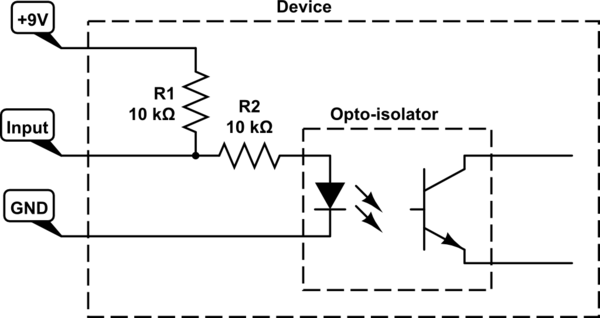 The OP has the following device. He would like to know how can Rpi interface this device.

The OP is asking 4 little questions. All 4 questions are OK, except the third question repeated below that causes some confusion.

How can I bring the input voltage down to a safe level that I can plug in to the GPIO output pins?

The OP knows that he needs to do two things:

(1) Send a pulse (switch on/off control signal originated from the 3V3 Rpi GPIO pin) to the input terminal of the device.

(2) Steps down the input pulse voltage to the logical level of 3V3 of the Rpi GPIO pin.

I needed to scratch my little head a bit hard to figure out what went wrong and how to correct it. Actually the OP did nothing wrong, it is only that he is a bit ambitious in the input output direction. I also confused myself in the very beginning because I also mixed up the input/output direction.

Now I think both the OP and me should agree on the following rephrased question.

(1) How to send a pulse from Rpi's 3V3 logic GPIO pin signal to control the device?

The OP points out that there is a voltage divider, dividing down the power source of 9V to roughly middle of 4.5V.

He might not know what I have guessed the following: The input terminal confronts to TTL logic and also Arduino logic, where > 4.2V is High Level.

For Rpi the High Level is only about 3V, not high enough to trigger the device. So the questions boils down to the logical level converter/shifter problem, converting any controller, including Rpi's 3V3 signal level to TTL/Arduino's 5V logic level.

One of the many common solutions is to use 2N2222 in open collector mode, as described below.

(1) The input terminal is to control the pull down circuit. 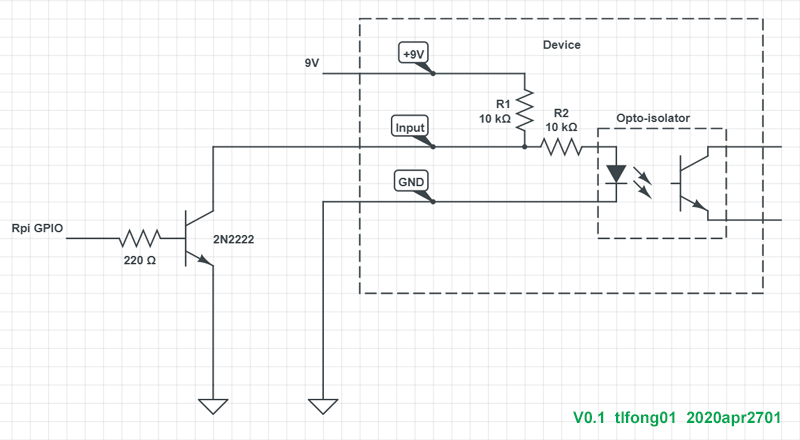 (1) Transistor as a Switch - Electronics Tutorials