I followed this guide to try to set up my RPi 3B (Rapian buster) as a wifi bridge. I performed the "General setup" and then the steps under "Setting up an access point with a bridge". There's one big difference, I don't want to use eth0, as this is supposed to be a wifi bridge. So instead of this in the guide:

I left out the ethernet interface for now.

Wifi was working fine with the wifi dongle and built-in wifi before these steps. Current situation is that I don't have internet access on the RPi, so instead of screenshots I unfortunately have to share photos of a screen.

So I followed the steps. I couldn't post them in detail, as stackexchange thought it was spam when I tried to post it. But it is all the steps here, only where it refers to eth0, I replaced it with wlx00c0ca66080c.

Since I'm using a wifi dongle instead of eth0, I still had to tell what it had to connect to, so I created /etc/wpa_supplicant/wpa_supplicant-wlx00c0ca66080c.conf and put this (the priority line is strictly not needed, but shouldn't harm):

So what happens after a reboot?

First of all it hangs and eventually fails on systemd-networkd-wait-online.service: 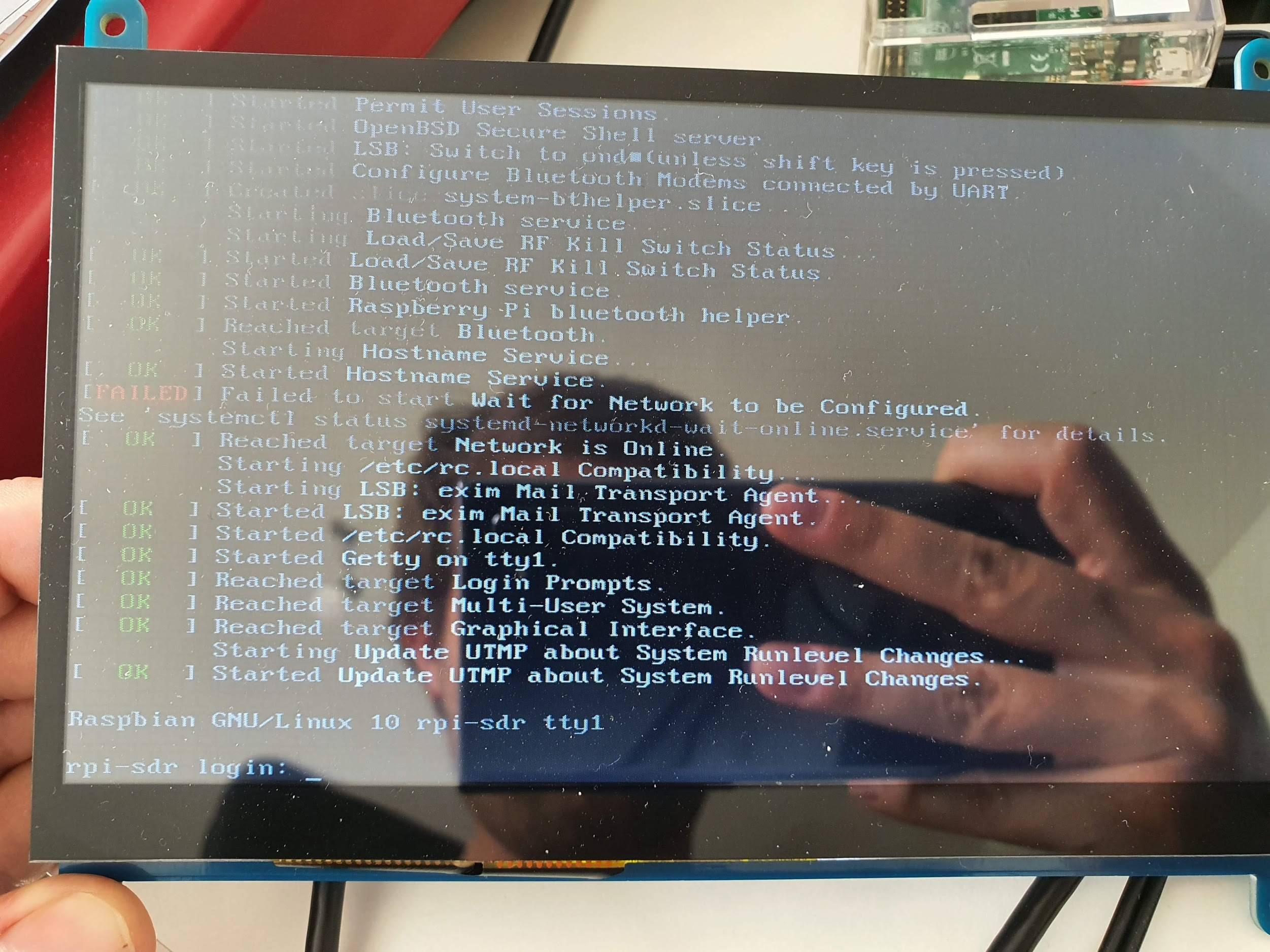 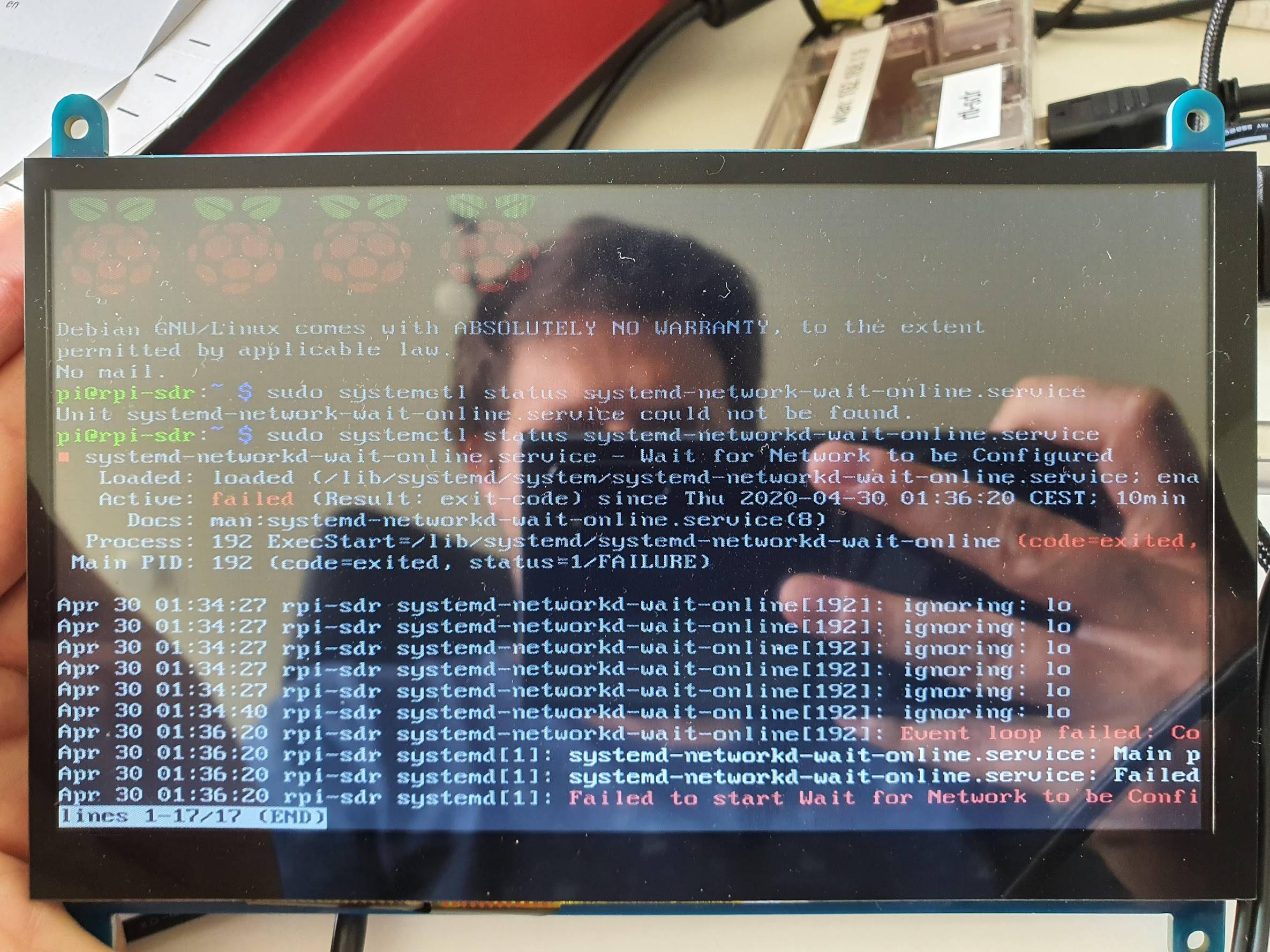 There was a solution given here, so I tried

and then add the slave devices of the bridge

but that didn't seem to help. 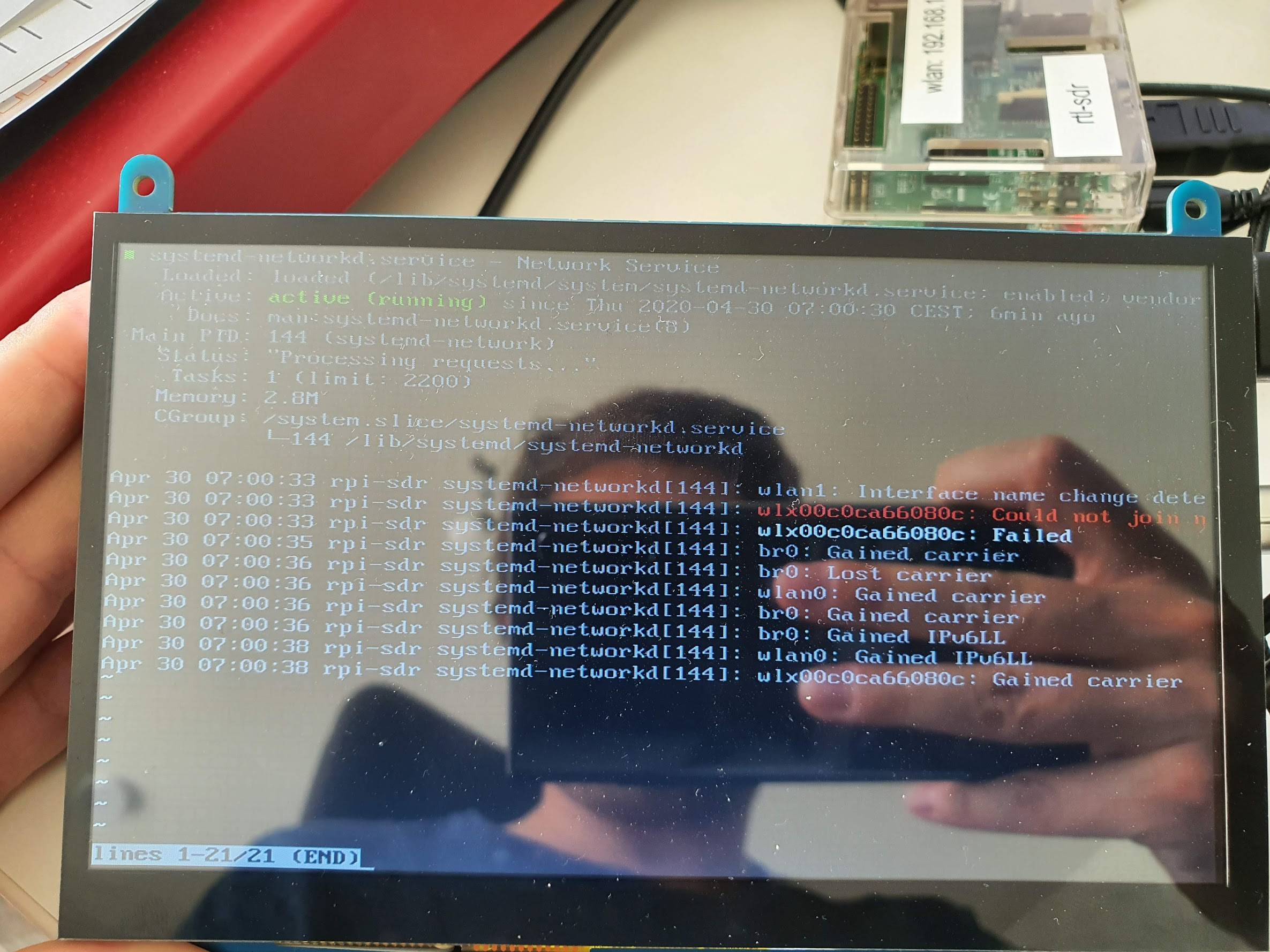 The error reads: wlx00c0ca66080c: Could not join netdev: Operation not supported 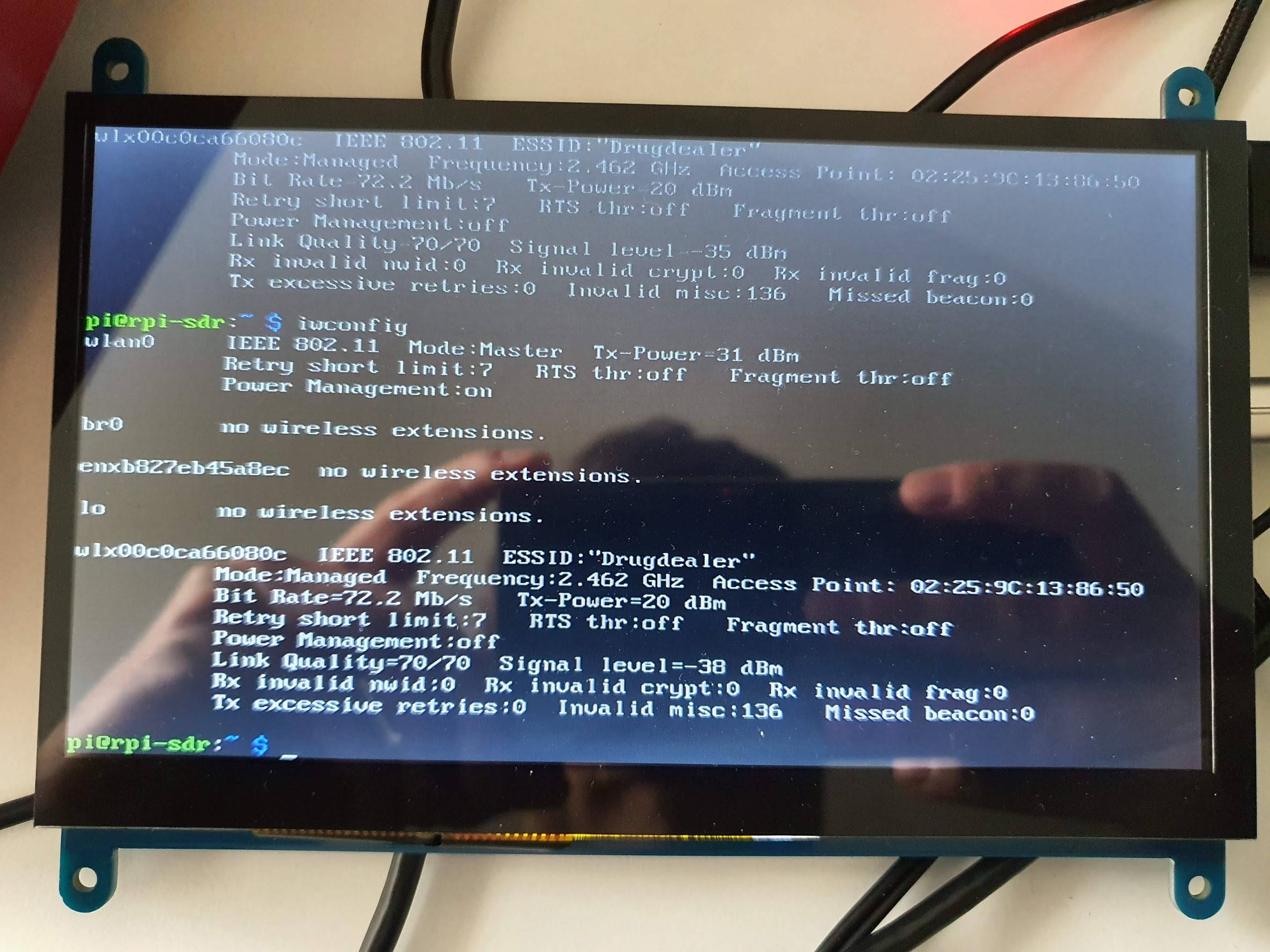 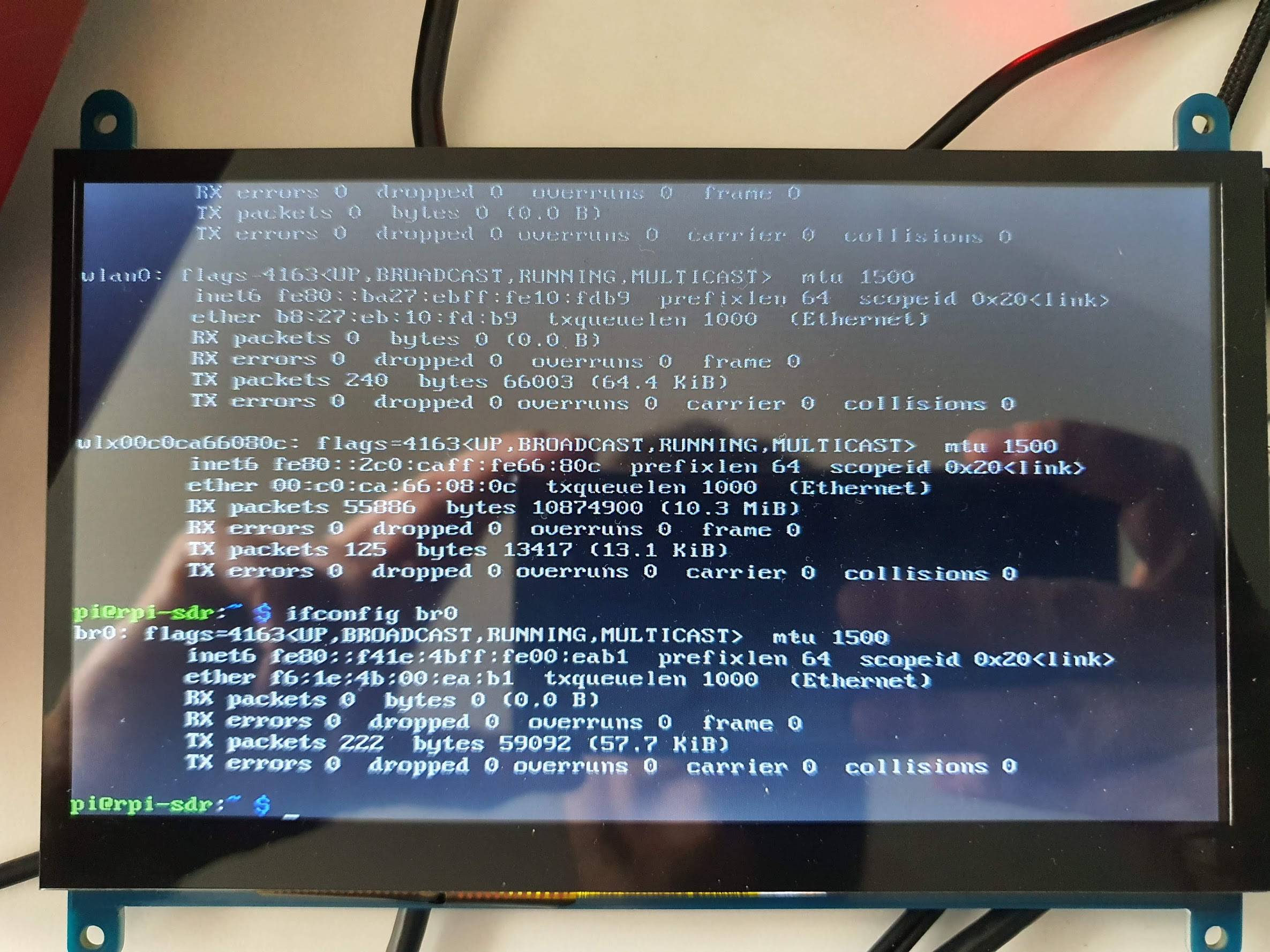 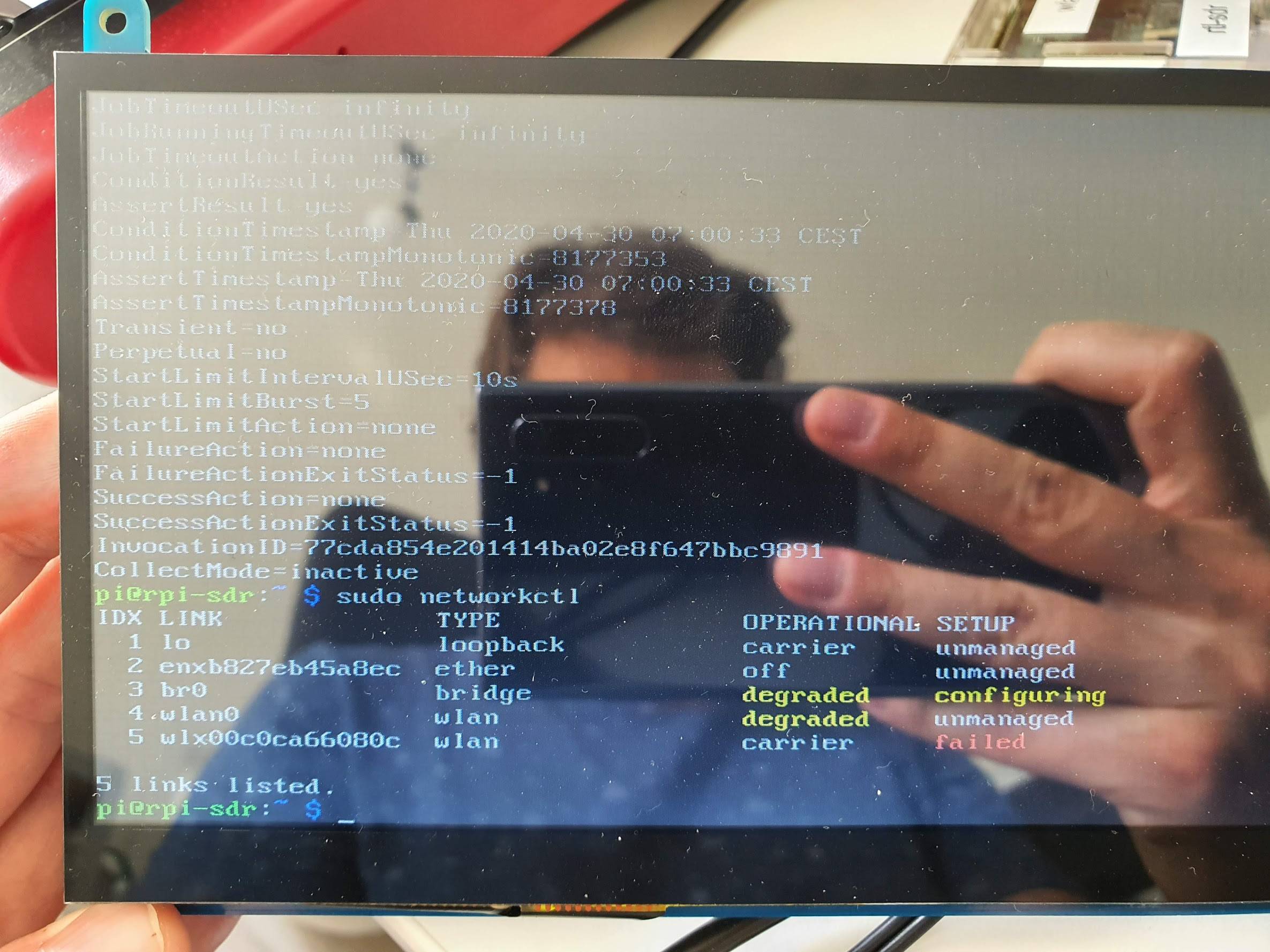 EDIT:
I have changed two things:
1. I have made the ethernet interface part of the bridge. The bridge now gets an ip address and at least I can have ssh access if I want. But for the rest of the tests, I have the ethernet disconnected. 2. Several sources (1 | 2) point towards enabling 4addr for the wifi interface. When I do sudo iw dev wlx00c0ca66080c set 4addr on and sudo systemctl restart systemd-networkd.service, I see that wlx00c0ca66080c becomes part of the bridge: 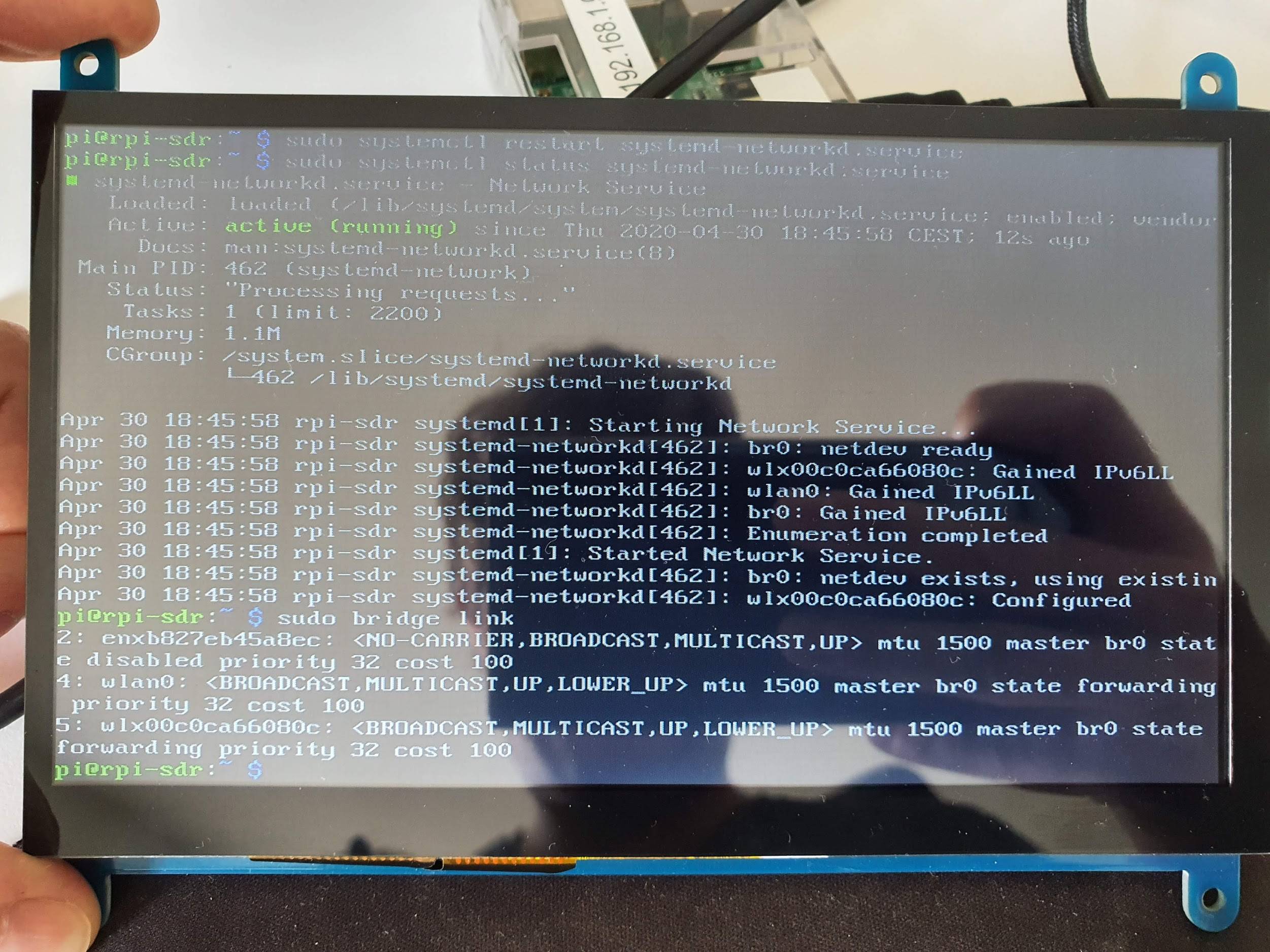 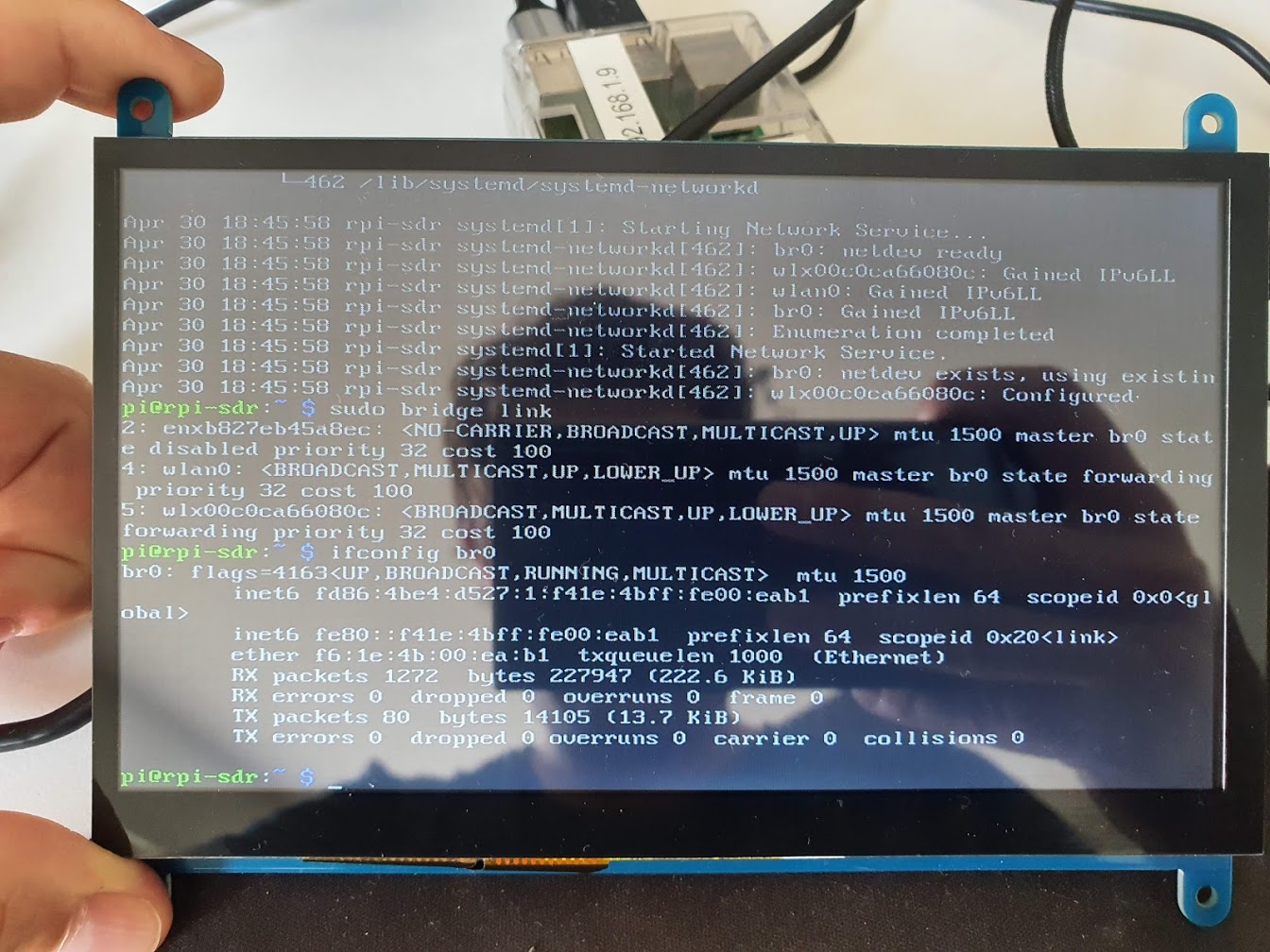 You are using the wrong tutorial. You should have read it more carefully, just the first sentences, that I will quote here:

We are talking about an access point together with an ethernet port eth0.

If you want an access point together with a wlan0 client connection to another wifi network (wlan repeater) then look at Access point as WiFi router/repeater, optional with bridge.

The Raspberry Pi is able to work as a wireless hotspot and simultaneously connect to another hotspot as a client. But the wifi device on the RasPi has a general limitation. The client connection cannot be bridged because lack of WDS (wireless distribution system) that is needed for bridging on the wireless. For further information look at Raspberry Pi WiFi to Ethernet Bridge for a server?.

Because you are using an additional USB/WiFi dongle it must support WDS and it must conform with your routers WDS so it is very difficult to give general instructions how to configure it. I'm afraid you are left on your own with configuration of your WDS. But it seems that your dongle does not support WDS because you also get the error message:
wlx00c0ca66080c: Could not join netdev: Operation not supported

You can explicitly check if your adapter supports WDS (my adapter does it) with this commands:

Supporting WDS by your adapter doesn't mean that it works together with your router. There is no standard defined for WDS so it must not fit.

If cannot get it to work, you can only use routing for the wifi client connection to the internet router and for this you don't need an additional USB/WiFI dongle. Just follow to configure an Access point as WiFi router/repeater, optional with bridge.

If you want to use your additional USB/WiFi dongle you can simplify the setup with an Access point as WiFi router/repeater with additional WiFi-dongle.

If you really need to "bridge" the WiFi client connection you can emulate it with proxy arp. It is not a real OSI layer 2 bridge but behalves like one. How to use it you can look at the Workaround for a wifi bridge on a Raspberry Pi with proxy arp. I suggest for your needs to use the ♦ Static configuration of proxy arp. It is simpler to setup.

Not the answer you're looking for? Browse other questions tagged access-point bridge systemd-networkd or ask your own question.