I have a Raspberry Pi Camera (F), Supports Night Vision, Adjustable-Focus and I wanted to use that to make a timelapse of some plants in python.

python code for taking a snapshot:

I thought that the camera will produce normal picture in daylight and using the IR filter with the additional IR LEDs at night.

Now the images I get in broad daylight look like normal IR images: 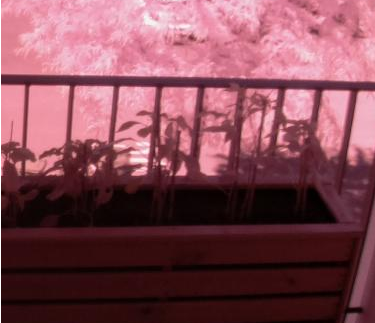 Is it possible to toggle the IR? I thought that the integrated brightness sensors would alread do that, but apparently the image itself is still infrared-ish even the IR-Leds aren't turned on.

Is there a way to use it as normal camera? Couldn't find any settings in the picamera library for that.

raspicam picamera
Share
Improve this question
asked May 21 '20 at 12:52

I expect not from your picture but a link to the board would help.

The main difference between a 'normal' camera and an IR one is that normal cameras have a physical filter behind of the lens that cuts out some frequencies of ultraviolet and infrared before it hits the surface of the sensor.

By removal of this filter, the sensor can then detect the IR wavelengths and create an image based on this rather than human visible light. Sometimes they are also in a different place relative to the lens as the focus point of IR is different to normal light - hence some IR cameras produce slightly fuzzy images as they have had the filter removed but nothing done to alter the focal point.

Waveshare do have a camera that acts in both modes BUT you have to edit config.txt (so a reboot is required) and dedicate a GPIO pin for camera control.

You can adjust how the brightness of the IR LEDs responds to the light sensors using these tiny adjustment screws. You're still going to have some IR artifacts in the images since the camera still doesn't have an IR filter. If you have access to Lightroom (or other software), you might be able to create an automated script to remove the IR artifacts (I'm definitely a novice at this but this might be helpful: https://photographylife.com/how-to-process-infrared-photographs)

Here's where I found the info on the adjustment screws: https://www.raspberrypi.org/forums/viewtopic.php?t=225060

There are also solder pads on the back of the IR LEDS mark EN. If you hook these up to a GPIO you get manual on/off control of the LEDS. In theory. I've tested this by hooking up that pin to ground and the IR LED goes off.

Still a pink image, though.

Long answer: The IR is a single sensor that can see IROYGBIV. It's not a separate part of the camera. So you would need a physical filter moved (from) in front of the camera. Kinda like our eyes. We see a certain range. We can block part or all of that range, but we can't just not see it.

Not the answer you're looking for? Browse other questions tagged raspicam picamera or ask your own question.

1
Stereo Vision Using Compute Module: Pi camera synchronization
1
Should motion detection use images or still frames?
1
Can you use the PiCamera library with a camera that is isn’t the PiCamera like the picture?
3
I just want to ask if there is any camera module (pi cam) that can do both nightvision and day recording?