Based on the screenshot, is this normal? In a couple of days, it will increase to 100MB of swap used (default is 100MB), but with low ram. I am running Pi-hole, PiVPN, log2ram, and No-IP. 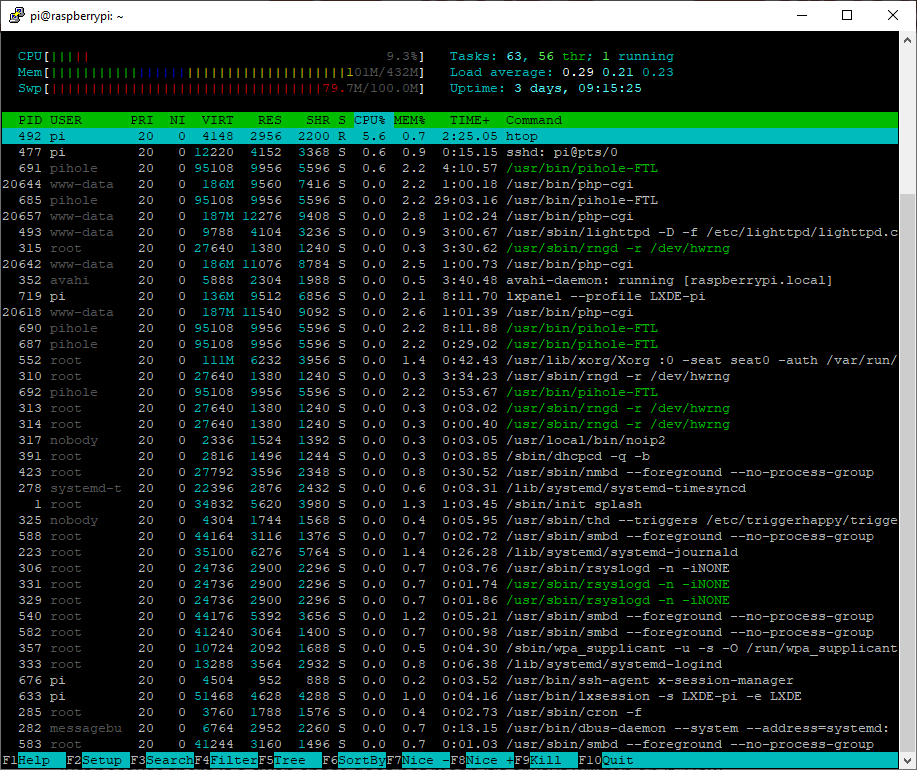 If we look at Raspberry Pi's default allocation of swap, it's actually quite low. On my systems for example:

If the nixCraft article referenced above is a reasonable "yardstick", the swap allocation on Raspberry Pi was penurious, and it's getting worse. You didn't ask about increasing the size of the swap, but if anyone wanted to do that, the clue is in /etc/fstab: dphys-swapfile.

It can be changed by editing /etc/dphys-swapfile

Stuff that ends up in swap and is not actually being accessed much will stay in swap regardless of the RAM usage. Stuff may actually end up in swap even when there is enough RAM for it depending on the nature of the data.

If every time RAM usage dropped enough to move something out of swap the system moved something even though there was no immediate need to access it, you'd end up with a context that potentially involves a sort of thrashing. For example:

Point being, it's totally normal and lots of smart people have been tuning this mechanism for decades. The behaviour reflects this. It is possible to tweak that using a sysfs interface, but the usual recommendation is that you leave it alone unless you understand what you are doing (which is not as trivial as it may appear).

Note that your swap usage is not really "high". 100 MB of swap (it looks like that's what you have) on a system with GBs of memory is unusual. The norm is to have a swap space that is bigger than the RAM space, which is why this looks so significant in htop. If you had 1 GB of swap (double your RAM), the red bar would obviously be much shorter.

So, if you think this is a problem and you want a solution, use a bigger swap space. What you have now means it is effectively impossible for "high" swap usage to occur, if it is considered relative to RAM (and not an arbitrary limit).

As an example, the laptop I'm working on has 16 GB of RAM and 18 GB of swap. Htop shows me as using exactly half the RAM right now, but there is still ~700 MB of swap occupied.

Not the answer you're looking for? Browse other questions tagged memory swap-space or ask your own question.

2
Does my RPi uses video RAM for tunneling X over ssh?
5
New PI 2 B+ unusably slow, CPU and RAM not being used?
2
Memory Limit of Python3 in Raspberry 3
0
Creating Swapfiles
16
How to permanently disable swap on Raspbian Stretch Lite
0
Raspberry Pi 4 Swap file