This is my first foray into Raspberry Pi (and these kinds of electronics in general) as well as asking questions about it here.

My goal: Attaching a power indicator LED along with a fan (Pimoroni Fan SHIM). For some reason I can't get them working at the same time.

Details: I'm trying to add a simple external power indicator LED that turns on and off with the system. I used the guide found here to wire my LED to the TXD pin (pin 8) and GND (pin 20 because both 6 and 14 are already occupied by other wires). My circuit is as in the guide: TXD -> LED anode -> cathode -> 220ohm resistor -> GND. I'd include the specs of my LED, but I'm not sure what they are... It came with the resistor as a set though, so I imagine they must be appropriate for each other.

Other devices I have installed are a Pimoroni Fan SHIM (here is its pin layout) and a NO momentary switch to turn on/off the system by shorting pins 5 and 6. For the fan, I have a pull-down resistor installed between GPIO18 and GND (pin 14) so that it stays off when the system is off. Both components work as they should.

According to the guide and as noted by other sources/forum posts/comments I've read, using the TXD pin should be straightforward and work with no real programming. In the end, I was able to get the LED to work perfectly by removing the Fan SHIM entirely. Now I'm suspecting that the fact it uses the very same TXD pin is interfering somehow.

The answer to this post makes it sound like this kind of shared GPIO shouldn't be an issue, but if removing the fan fixes the problem, I'm not sure what else to think. Though the fan is provided with scripts to run fan curves and operate the built-in LED and tactile switch, I haven't installed any of these and I simply turn the fan on at boot with dtoverlay=gpio-fan,gpiopin=18,temp=20000 in config.txt and let its pull-down resistor do the rest.

My question: Is there a way to get this all working while keeping the fan installed, or can I really only use either the LED or the fan, but not both?

Apologies if there's a lot of information in this post. It feels like it's probably a simple problem, but I'm at my wits' end now. Thanks for reading.

Some final stuff if it helps at all:

EDIT: Just out of curiosity, I tried wiring up an LED straight to the Pi's first 3.3V pin, and it's lighting up the exact same way it does in my second picture below; a faint point in the middle that persists as long as the Pi is plugged in, on or off. Does that mean anything useful?

Here are those pictures of the LED and the whole circuit: 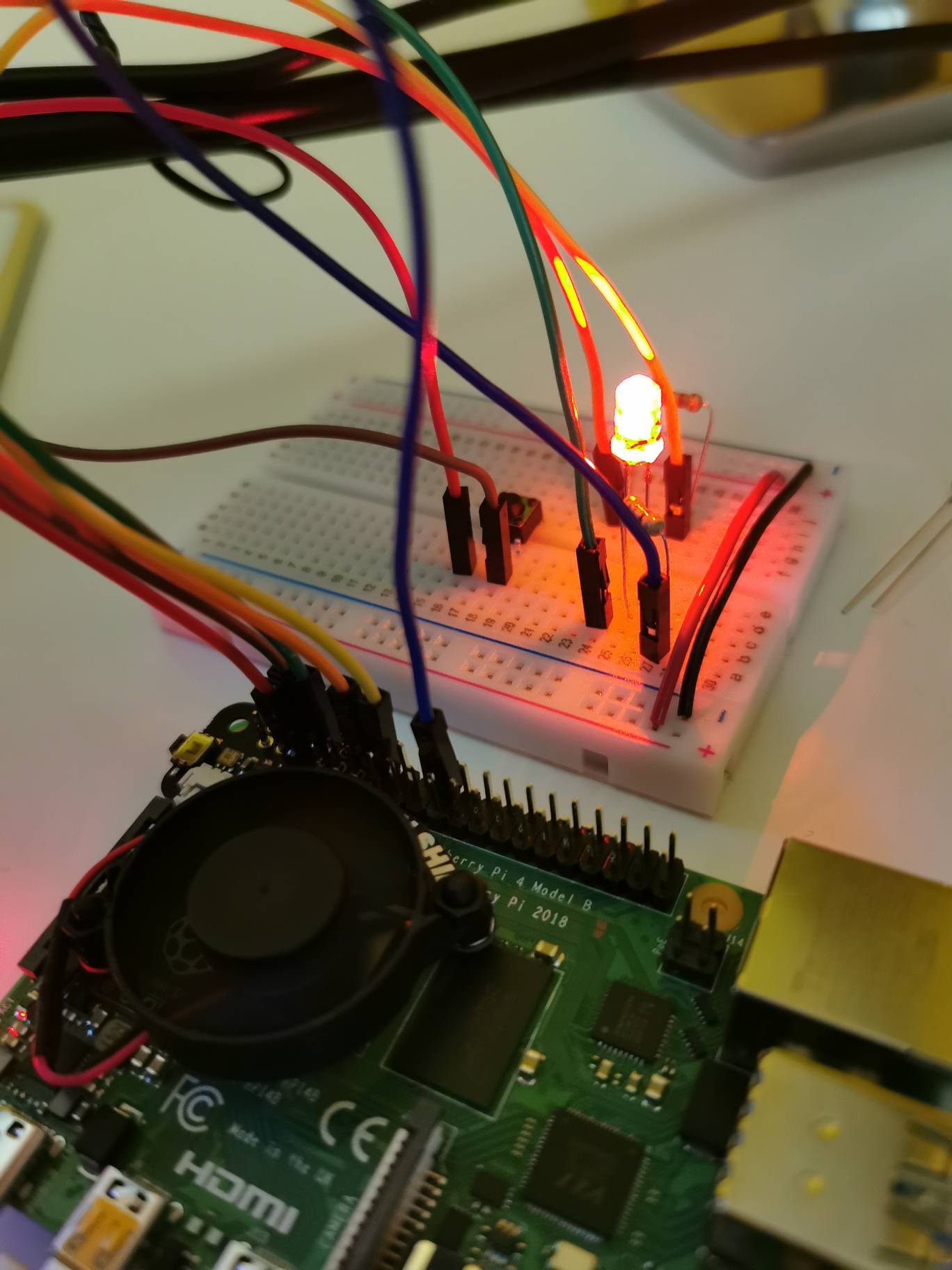 System off with half-lit LED: 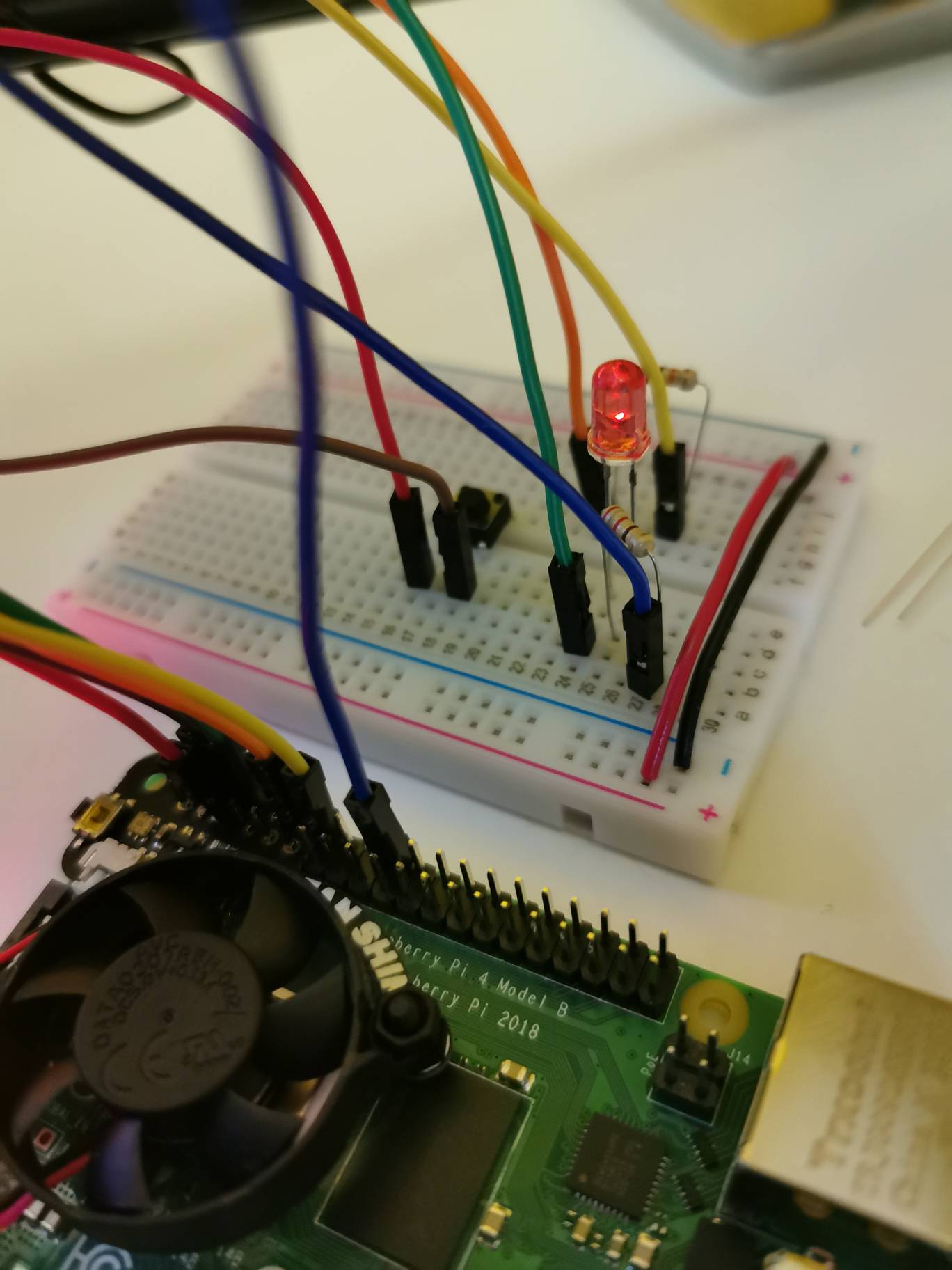 I'm not sure if this is really an "answer" since the initial question remains unsolved, but I did get the setup working how I want it to:

I ended up using the GPIO Zero library to control the problematic LED. I made a script the turns the LED on at boot, then turns it off with a press of the power button which then shuts down the system. This allowed me to keep my fan installed and move the LED to a different pin altogether which has eliminated any half-lit weirdness.

Some remarks: first, the LED of course is no longer directly linked to the actual Pi's on/off state, instead relying on and assuming the proper functioning of a button that does directly control it. Second, though I say the LED turns on at boot, the way I have it set up (editing rc.local to run the script at boot) turns it on a bit later in the boot segment than the TXD pin did (it only lights up after all the logos have appeared on the screen), which I don't prefer but is acceptable.

Despite those particularities, the system now behaves as it was meant to, so I'll be going with this for this project. Thanks for the comments I've received in the meantime.

0
Can GPIO pins be used by more than 1 equipment?

2
My first breadboard / led
4
Can't get LED to turn off
0
GPIO Pin 4 flashes even when it should be off
0
Will a soft shutdown turn LED off when connected to power?
1
Why won't the LED turn on?
0
help reconstructing blinking LED circuit that required GPIO #17 pin low rather than high
2
Powering 100mA LED