Getting Memory Error while installing tensorflow in raspberry 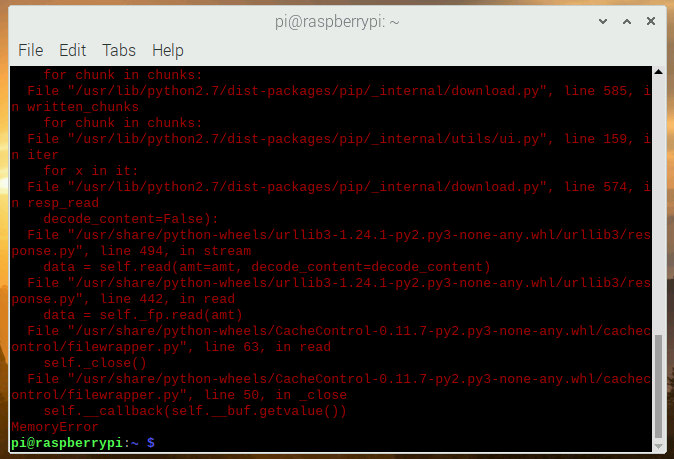 TensorFlow will install on a RPi but it has been a bit of a nightmare. The instructions of the TensorFlow site are here, but I had to hunt around for version that would install since the standard one would not.

That said I've just tried an install on a new 8G Rpi4 using pip3 install tensorflow and it installed straight off, so I presume TensorFlow have fixed the previous Rpi install problems. Just make sure you use pip3 and not pip.I haven't run tensorflow on the 8Gb Pi but it has run ok on a Rpi 3 previously.

The installed version was given as

Not the answer you're looking for? Browse other questions tagged software-installation python-3 raspbian-buster qemu or ask your own question.

8
Error while trying to compile RStudio
0
Error installing wpasupplicant
2
Installing pip3 mysqlclient results in error
2
Unable to install libatlas-base-dev on Pi 4 B because of unmet dependencies
1
Error Installing TensorFlow on Rasperry Pi 3 B
0
SimpleCV console cmd is not working at all in RPI 3B running on Raspbian Buster release
0
I keep getting an error while I'm installing firefox. How do I fix it?