It seems that those pins can be used to start Pi 4, but I am not sure exactly how. Can a Pi 4 start after having been shut down by the shutdown menu, if I connect the two holes like below for a short moment?

For what it's worth, I have set the following configurations to reduce power usage when it is shut down. 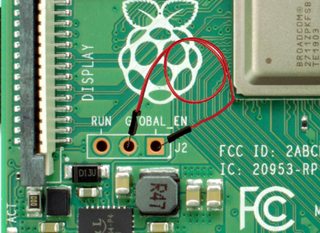 PS: It does. I was afraid to try it because it might burn my Pi, but since no one was answering, I took the risk. I connected the 2 holes with an M-M jumper cable for a second, and the green LED began to blink and the Pi 4 booted.

The Organization's schematic is incomplete, but it does show GLOBAL_EN connected to U2 - the PMIC (Power Management Integrated Circuit). Pulling GLOBAL_EN low (aka shorting to GND) resets the PMIC - which causes it to power up all its outputs, in turn causing the Pi 4 to boot.

Your question is not completely clear to me, but when you say, "I am not sure exactly how" you may be asking, "How would one implement this feature - shorting GLOBAL_EN to GND?" If that's part of your question, there are several ways this could be done, but I know of nothing in the current Pi 4 hardware that would support this. One typical way this is done on other machines is with a RTC (Real Time Clock), but Pis have never had one. Another way would be with an external sensor of some type that provided a switch closure when some condition was sensed. Still another way would be to use a small microcontroller (Arduino for example) to set the state of GLOBAL_EN.

If you've not seen it, you might want to read this answer, or if you want full details try this GitHub page.. Now we've both confirmed shorting GLOBAL_EN to GND will in fact boot the RPi 4 from halt, poweroff or shutdown when the EEPROM firmware is configured iaw the documentation.

Not the answer you're looking for? Browse other questions tagged power power-management or ask your own question.

7
Raspberry Pi 3 model B "dtoverlay=gpio-shutdown"
5
What is the minimum power required for an RPi 4 in `halt` or `shutdown`?
3
How should the J2 header be used on a raspberry pi 4?
0
Fan won't turn off on shutdown
0
Send power on/off/cycle command from one Pi 4 to another Pi 4 using GPIO (each having their own power supply)
0
Using a SPST switch with GLOBAL_EN and GND on Pi4 B

4
Controlling 240 volt power supply (via Relay) with Raspberry Pi
0
MySQL not starting after powering the Raspberry Pi off
5
Raspi with readonly fs, does power loss still do damage?
1
How to hack power bank with timer to power cycle Raspberry Pi
3
How to power a Raspberry Pi and servo motors with one power supply
3
Does Raspberry Pi 4 consume considerable amount of power in soft-off state?
0
Using a SPST switch with GLOBAL_EN and GND on Pi4 B
2
3 12V DC motors on raspberry pi with L298N