I am running a haarcascade based face detection and face recognition on Raspberry Pi 4. The CPU temperature rises to 83-84C. So I have installed a heat sink and 5v pi fan. After installing this, I have noticed that temperature is always below 70c. But 5v pi fan is making too much noise so I have disconnected it from 5v and running it using 3.3v. Now fan is not running at full speed and is a bit slow. Due to which the temperature remains 74-76*c. I do not want to run fan using 5v as its making too much noise. Is running it on 3.3v fine. Is 74-76C a normal temperature for raspberry pi.?

What temperature range is normal or... how hot is too hot?

Anything under 50°C is great!

It is possible to stay in this temperature range without fans (more on that shortly).

The Raspberry Pi does have some self-protection against over-heating. Specifically it will reduce its clock speed so it can run cooler. The drawback is that it's not doing computations as quickly.

The throttling temperature is controlled via firmware and will throttle at 80°C (But a firmware update could change that. So this value may not be the same in the future.)

You can think of Raspberry Pi cooling in a few ways and... whether or not the Pi is in a case, the case type and venting, will also impact these.

There are lots of variations on fans. Many are always-on and at just one speed. There are fan solutions that only kick on when the temperature reaches some threshold. There are also multi-speed fans.

There is also a variety of quality among fans. I've been disappointed with several fans that initially seem to be fine... only to start hearing excessive fan noise a few days later (the bearings are already have problems).

Noctua brand is known for their high quality and they are one of the least noisy fans. They do cost a bit more. A cheap fan might be in the range of $4-8 US Dollars. A similarly sized Noctua brand fan would probably be more like $14. Be aware that they make these in 12v and 5v versions and you want the 5v version for a Raspberry Pi and likely the version that does not use the PWM (Pulse Wave Modulation -- which they use to control speed so this is a variable speed fan. But Noctua expects a 5v PWM and I think the Pi uses a 3.3v PWM and I'm not sure that can reliably control the fan without problems. So I chose to get the basic single-speed (non-PWM) 5v fan. This brand is unlikely to be excessively noisy nor start to make the buzzing sounds of a failed bearings (at least not any time soon).

Not all passive cooling systems are equal. The basic idea is to install a tiny heat-sink (fins) using some thermal tape. These provide only moderate cooling help and usually don't do an adequate job without also adding a fan.

Recently (a few weeks ago), I purchased an Argon One Pi 4B case for my Pi (Argon40.com). This is an interesting case because it also has a small board that attaches to the side of the Pi and routes ALL connectors to the rear (power, HDMI, and audio are all routed to the rear next to the USB and Ethernet ports) and also supplies a power switch. The case includes a variable speed fan and software to determine when to activate the fan and the power level. Their 'default' values are no fan below 55°C. At 55°C they activate 10% fan. At 60°C they boost to 55% fan. At 65°C they go all the way to 100% fan.

But the entire upper case body is an aluminum alloy casting and they have solid posts that hang down from above and touch the CPU (System on a Chip) via supplied thermal tape. When I put my Pi 4B in that case... the temperatures (the Pi was previously in a case with basic heat-sinks and a fan) that were previously in the mid-40's... dropped to the upper 30's. When I apply typical workloads I sometimes see it go into the low 40's.

If I apply synthetic loads to send all 4 cores to 100%... I have managed to get the Pi to about 46°C. I once managed to run it hard enough and long enough to finally see it hit 51°C. I have never managed to get it any hotter than this ... no matter how hard I try. Keep in mind... this case doesn't bother to turn on the fan until the temps reach 55°C. This means I have ... never once ... had the fan turn on in all these weeks of trying. I would say it has outstanding passive thermal management. (The case will feel warm).

This case is a bit on the pricy side ($25 is more than the cost of most Raspberry Pi 4 cases) but it has several nice features and, in my opinion, it's worth it. The same company Makes a more compact case uses the same passive thermal management (at $15 USD). That case does not have an option for any cooling fan. But when I noticed how exceptionally well their other case is able to dump the heat, I'm starting to think that the their cheaper case would have been more than adequate (I have not tested one, but I'm thinking I will because I own several Raspberry Pi 4B's.)

Full disclosure: This is testing in my home office, which is located in the basement of my home. Since hot air rises, the basement is naturally the coolest room in the house. It tends to be around 22-23°C (the upstairs is much warmer). So I suspect if I tested the Pi upstairs I might be able to get it warm enough to kick on the fan at the lowest speed.

I have looked at a few other passive thermal cases... where the entire case body (top and bottom) is all heat-sink. These cases are not expensive ($10-15 USD)

I would not use the "official" case for the Raspberry Pi 4B. The case is basically sealed with no way vent any warm air.

If the temperature of a Pi4 rises this much, you either have a poor case with impaired circulation and/or have not installed latest firmware updates.

It is simple to implement Fan control based on temperature.

I use a heatsink case, and even running a stress test the temperature barely exceeded 60℃

See https://forum.core-electronics.com.au/t/how-to-stress-test-temperature-on-raspberry-pi-stressberry/6887/2 for my test results.

In that case you can use two more fans and detach that fan which is connected with pi. Find two processor fans of 12V and an adapter. Attach them in parallel. Put one on top and another on one side. You can make this more cool with this setting. ALso try to use an armor heat shrink.Liquid cooling is also a good option. 70D C is quite good. But try to keep that between 55-65.

Your cooling system is rather poor: I also have a 5V fan on a heat sink (the cheapest $1.5 variety) powered by 3.3V to reduce noise, and the CPU temperature is around 50°C while idle and rises up to 65°C under full load. Perhaps you should find a case with bigger vents: a totally enclosed case (with just connector openings) is 5-10°C hotter than a case with vents. Putting the cables away from the fan, especially the flat ones, can win you another 2-3°C.

But in fact, even 73°C is not extreme. There's no real benefit in keeping the CPU temperature under 50°C. Staying below 80°C, on the other hand, makes a substantial difference because it avoids throttling.

If anything, I'd keep a close look at HDD temperature if you happen to have one connected. Many USB HDDs are made with the expectation that they will be only run occasionally, and tend to overheat if you run them 24/7. I actually installed another fan blowing on the HDD after I discovered it was running hotter than the CPU.

Use a passive cooler for Raspberry Pi 4. For example this one is good. 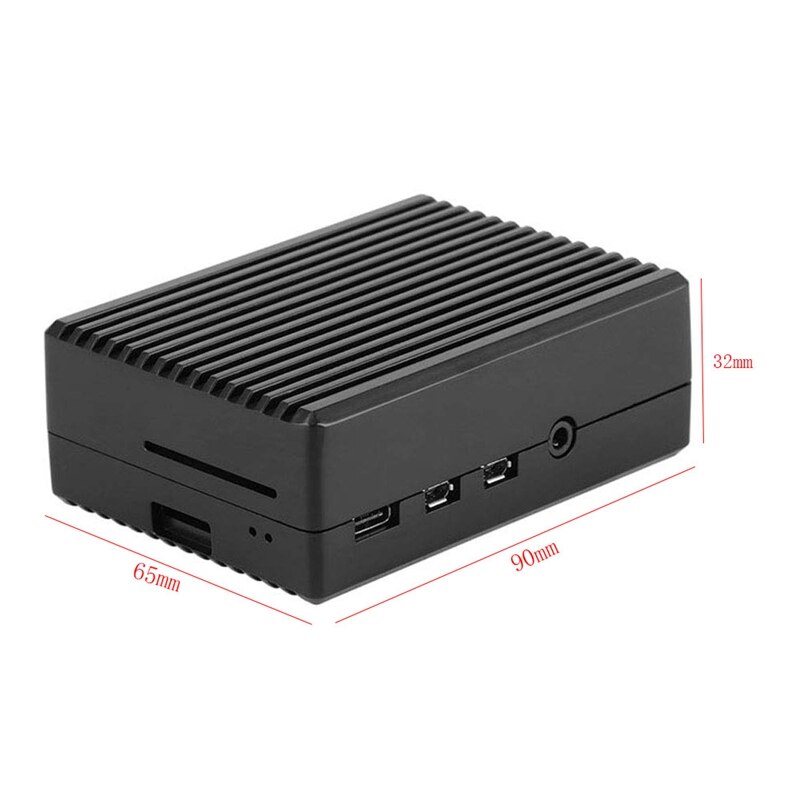 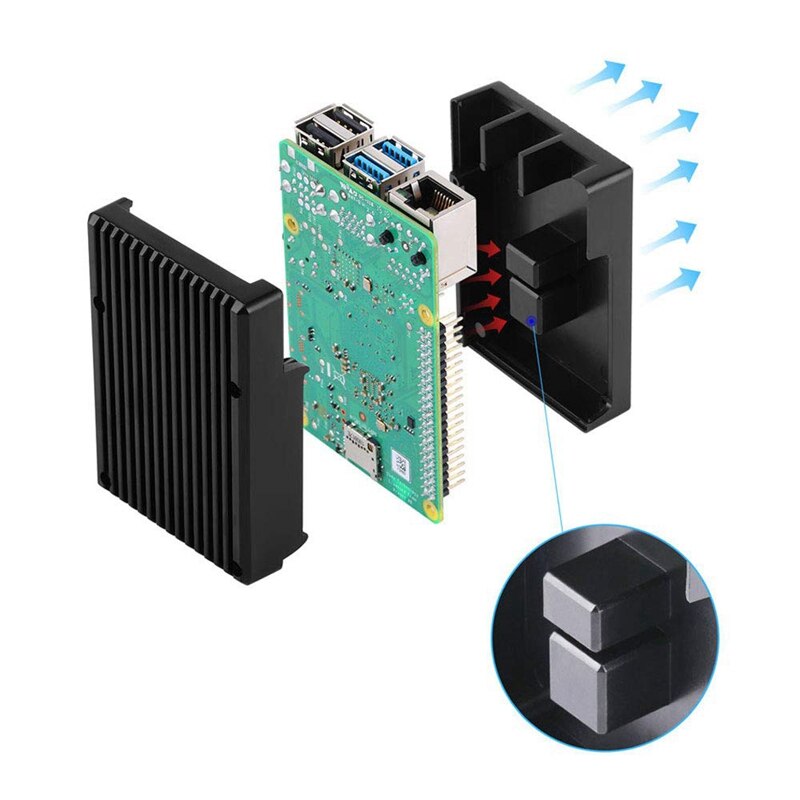 The "bottom line" for Raspberry Pi 4 is this:

A similar question was asked recently, and there are many others here to choose from. You will learn some things by reading these Q&A, but it won't change the bottom line.

And if fan noise is bothersome, you may be interested to know that simply orienting the RPi vertically instead of horizontally makes a substantial difference in component temperatures - you may find the fan unnecessary.

RPi 4 Thermal Testing is mostly self-congratulatory publicity, but you will pick up some information. For example: RPi will run cooler if placed in a vertical orientation.

I use the "Geekworm Raspberry Pi 4 Aluminum Case" (Link) since a week with the 4GB model. This silent case cools all 5 chips passively (with itself as many other cases), not just 2, 3 or 4 chips as all other cases like this. Took some time to accidentally find it. Even if not all chips need cooling, better to be safe than sorry. 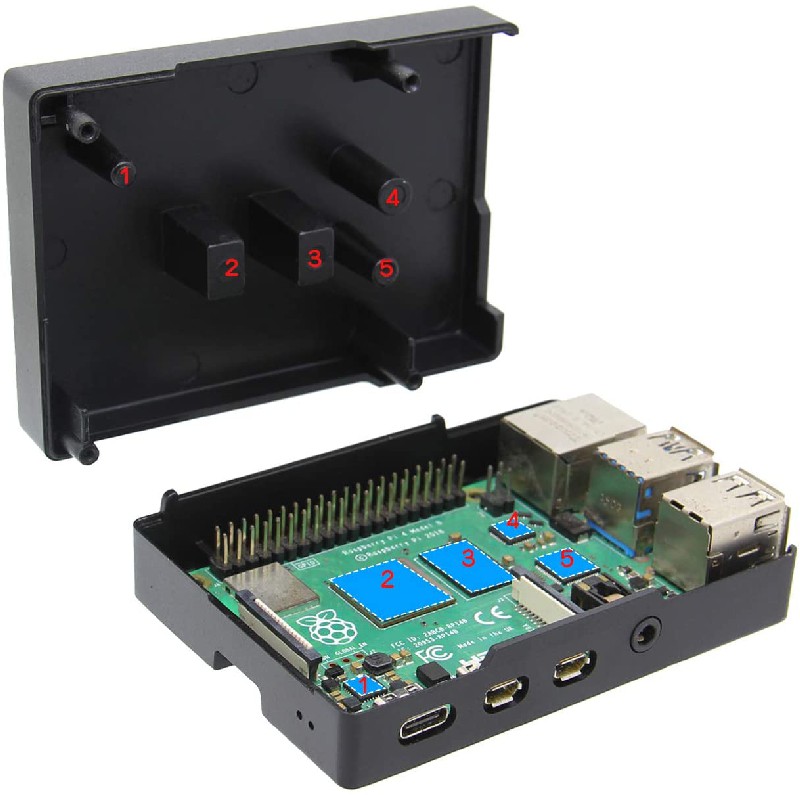 After one week 24t/7h uninterrupted duty with Pi-Hole (my PC runs 24t/7h too + Smartphones, TV and PS4), it stays at ~43-44 °C (room temp. is about 25 °C). Directly after mounting all parts together and installing Pi-Hole, the temperature were at ~42 °C. This is good, but it might be not enough action to push the temperature higher. Later, I additionally use VPN on the same Pi for all traffic. Maybe more stuff.

For another Pi 4 B (8GB) as a media center and maybe retro gaming, I will use the "Argon ONE M.2 Case" (Link) which offers a safe power button, an SATA M.2 slot, two full size HDMI ports, configurable cooling and IR support (for remote control). I will not use the included fan, but for sure Noctua's NF-A4x10 5V (Link) which will be much better. Like many other cases, it passively has two integrated case pillars which cool the CPU and ram only, so I will use some small copper heat sinks (Link) for the remaining chips (I couldn't find one for the tiny USB-C port power supply one) as well the M.2 SSD (Link) plus again the Gelid thermal pads. This should stay very cool and silent thanks to Noctua, Gelid, copper and the fan controls of this case.

I read, that the USB ports chip can make problems if it's getting too hot. So this should also prevent possible problems (incl. the M.2 USB connector which comes with the case), if I later add an HDD for more storage space etc. and long term running. Copper cools way better than aluminum, but it also is heavier, which is fortunately irrelevant at this small scale.

Not the answer you're looking for? Browse other questions tagged pi-4 temperature or ask your own question.