Boot up problem after system update

After a reboot, it says autoboot.txt not found on a 'black screen of death' (which is attached). I have tried creating one with boot_partition=0 or 1 or 2 or 6 with no success.

I went back to an archive (on a different SD card) and Pi was working fine, but crashed again after system update and reboot. 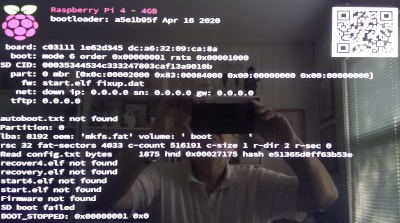 Somehow your boot partition is corrupted/edited/removed/illegally(without proper permission) edited. And now it can not find the partition. This happens most of the time when we are trying to edit a file in boot partition with a windows OS that has virus in it. You have to take a backup of your rootfs and reinstall everything.

I have resolved the problem but not why it happened in the first place.

I generated a new system image on a new SD card. There was a substantial number of missing files on the faulty SD card root partition, in particular all .elf and kernel images.

I copied the root partition across.

I then needed to edit cmdline.txt and /etc/fstab to have the correct UUID for the SD card. Rebooted and all was fine.

On a subsequent update, it was found that Kodi was not updating correctly and aborting the update. Why this should corrupt the boot partition on two relatively independent cards during a system update is the major question. I fear someone else will experience what I have.

Not the answer you're looking for? Browse other questions tagged boot pi-4 raspberry-pi-os-buster or ask your own question.

0
After I remove swapfile, I can't do anything! How can I revert this problem?
0
cron not running @reboot command
1
Initial startup blank screen
1
Raspberry Pi 4 no wifi after update && upgrade
2
Cannot access internet after upgrade to Buster
3
Pending kernel upgrade even after reboot my RPi4