I've been doing some research on power buttons for the Raspberry Pi, but I'm having quite a hard time finding information. Right now, I have button working on GPIO5, and when I connect it to the opposing GND pin, the Pi boots up. I added the line dtoverlay=gpio-shutdown to my /boot/config.txt, so that I can shutdown with this connection as well. However, I have a couple of questions that I'm having a hard time finding answers to.

The operation is explained in /boot/overlays/README

It is quite safe, I have it on all my Pi in case I need to shutdown a headless Pi (or one without keyboard attached), although my Pi are rarely shutdown, unless I am adding hardware.

I use dtoverlay=gpio-shutdown,gpio_pin=21 so I can shutdown by bridging pins 39/40

I see two separate questions re use and configuration of "power buttons" to halt and boot an RPi 4:

Is the shutdown initiated with connecting the GPIO3 pin and the GND pin considered a safe shutdown?

Yes - it is a safe shutdown. For details & confirmation, see REF 1 and REF 2.

Before going any further, I'd like to make sure we're clear on two points:

That said, let's review the options:

This is the easiest option, and you need not read any further unless you need to minimize power consumption while in shutdown.

The RPi 4 introduced a new bootloader that's stored in EEPROM (instead of a bootcode.bin file). It also provided new configuration properties - two of which are relevant to reducing power consumption while the RPi 4 is shutdown or halted; i.e. the system is not running, but is powered up:

If 1 then 'sudo halt' will run in a lower power mode until either GPIO3 or GLOBAL_EN are shorted to ground.

This informs us that the GLOBAL_EN input node may be used in lieu of GPIO 3 to restart the RPi 4 in all possible configurations of these parameters. Three things should be noted re GLOBAL_EN:

The GLOBAL_EN node is shown in the photo below: 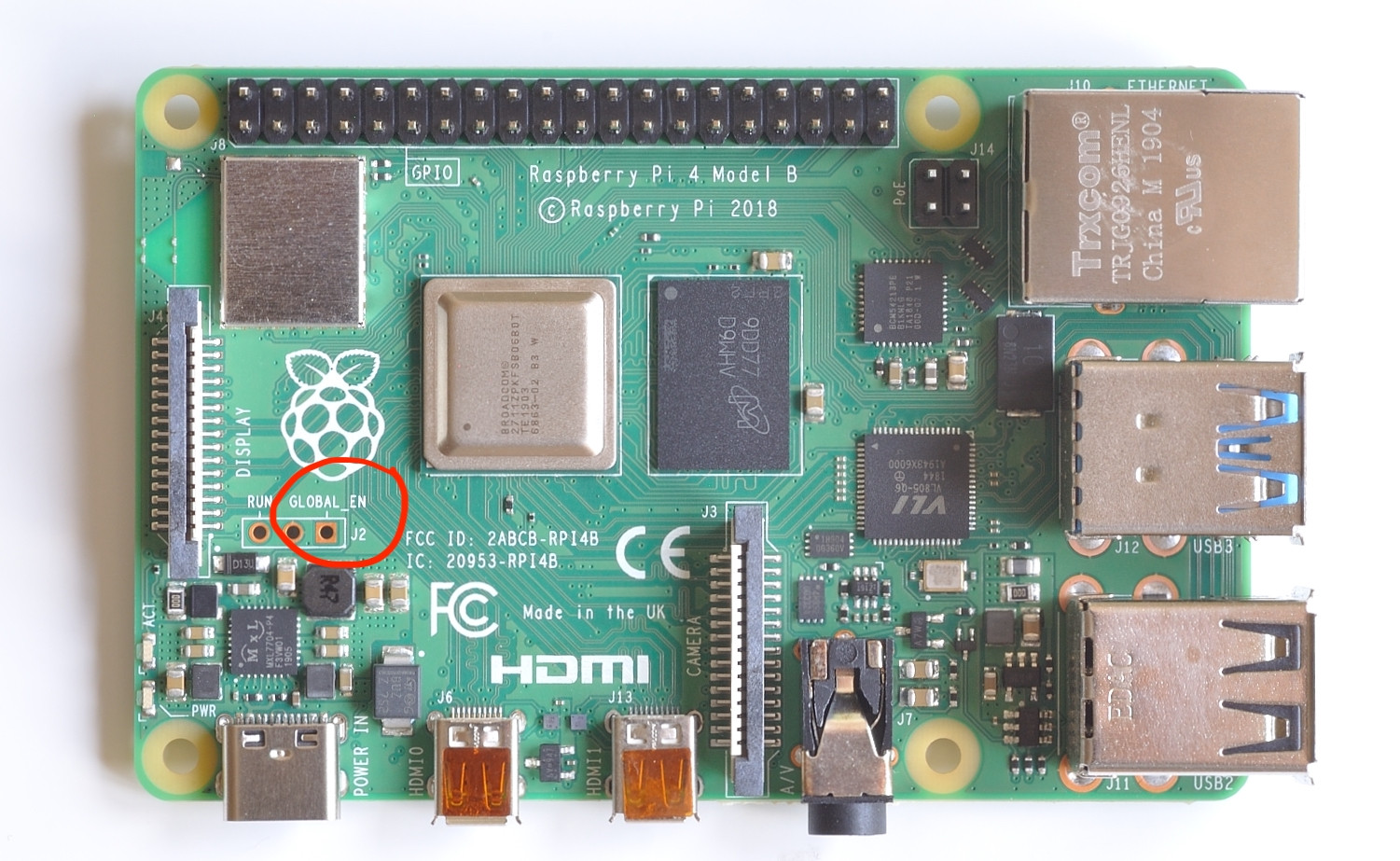 This is more difficult than Option 1, but offers the advantage of reduced power consumption in halt/shutdown. The most straightforward hardware implementation is to use two pushbuttons - one for startup, one for shutdown. If you want to take some additional effort, a single button startup & shutdown solution is illustrated here.

Not the answer you're looking for? Browse other questions tagged gpio boot power config.txt shutdown or ask your own question.

26
What are the RUN pin holes on Raspberry Pi 2?
3
Does Raspberry Pi 4 consume considerable amount of power in soft-off state?
0
Raspberry Pi 4 B, GPIO_shutdown not working at all
0
Three-Pin Switch for On/Off, Pi Zero W
0
How do I turn off a raspberry pi without use of desktop?
0
Shutdown/reboot Raspberry using a pin other than pin 5
-1
How to use an i2C OLED display using a GPIO other than pin3?
0
How to boot and safely shutdown with a button when WAKE_ON_GPIO=0
-1
Bs250 transistor as switch

16
How do I read a button through the GPIO?
0
Safe shutdown button not working
2
Shutting down quickly (And safely)
0
gpio-shutdown doesn't seem to have an effect
0
How to add power button to RPI 3 b+?
0
shutdown/reboot raspberry using GPIO - doesn't work for me