I'm new to the world of Raspberry Pi, I'm setting one up as a little PC for a kid. I have a RPi 4 running Raspberry Pi OS, and I've build a case around this heatsink. I have created a simple circuit to control the fans from a GPIO using a MOSFET. 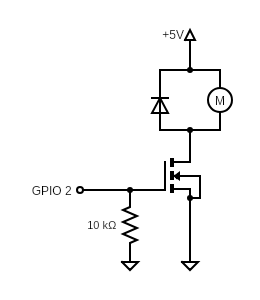 I am using a python script as a service to control the fans when booted. This seems to be working fine, I'll include it for reference in case it's important:

The real purpose of the circuit was to turn the fans off when the Pi is shutdown/halted so they aren't running 24/7. The power supply will always be connected. However, for some reason the GPIOs are being driven high even when shutdown.

I have tried using dtoverlay=gpio-poweroff in config.txt which I now understand is not the correct thing to do.

I have tried creating a systemd service (following this) to run at shutdown, which briefly set the GPIOs low but then when it fully shut down they went high again.

Why does the Pi drive pins high when halted? Is there a way to overcome this or do I have to make a new circuit to be driven by active low?

Those pins will read high while the Pi is powered (unless they are driven low by software or an external circuit).

Not the answer you're looking for? Browse other questions tagged gpio hardware shutdown or ask your own question.

4
How to program active cooling connected to GPIO

2
Python script failing with AttributeError: LED instance has no attribute '__trunc__'
0
Raspberry Pi GPIO pins stuck high after using L239D chip
8
Cooling fan powered directly from GPIO?
0
counter with tkinter
1
Controlling fan of the LABISTS Raspberry Pi4
2
Why does my Pi Zero keep shutting down by itself?
1
How safe is sudo halt -f to shutdown a RPi?
0
How to boot and safely shutdown with a button when WAKE_ON_GPIO=0