I'm trying to power a Raspberry Pi 4 via a 6-AA battery pack via buck converter which steps it down to 5V but it gets stuck in a reboot loop on boot up.

Watching the display on the buck converter, the voltage dips below 4.6V and the red light goes off on the RPI and it reboots again (I only get as far as seeing the rainbow screen and then the 4 raspberries).

I've gone up to 5.3V on the converter but it still dips down too low. I got it to boot fully once on rechargeable batteries and once on alkaline but after that no luck. Once when watching on alkaline it seemed like it didn't dip that time for some reason and then right after when trying it again it did dip. A wall power supply works fine.

What's the best way to solve this? Add a component of some sort or by some other method? Perhaps increasing the voltage above 5.3V if that's safe to do?

Thanks to the helpful answers. The last things I'd like to know are:

From experience I bet the problem is a not-powerful-enough converter (I remember a question asked earlier, where an even smaller converter was put to test and failed miserably, killing the Pi in the process). Look for a converter featuring a ring inductor with thick copper wire around it: those can typically handle enough current to start a Pi.

Fresh AA batteries can deliver 1.5-2A @ 1 volt, so 6 of them there should deliver about 9-12W: enough power to start a Pi 4 without any external peripherals. They won't last longer than half an hour with such a load though, and even a single half-discharged cell may kill the power output of the whole bank. If you want to actually use a Pi with batteries, you will need a better power source.

You've not explained or shown how you have your batteries arranged, nor provided any specs on them. But it seems likely they are in series - thereby providing ~ 9V output.

Batteries in series can provide no more current that a single battery, and even a good quality AA cell isn't capable of much more than 1 amp. And so your battery pack will be unable to source more that 1 amp to the converter - that's not likely to be sufficient as the calculations below will show.

It's not possible to do a calculation with much accuracy because there are several variables missing - the battery specs and the regulator efficiency being two important ones. However, we can make assumptions as we step through the calculations:

I found this graphic depicting how much current a good AA battery can source: 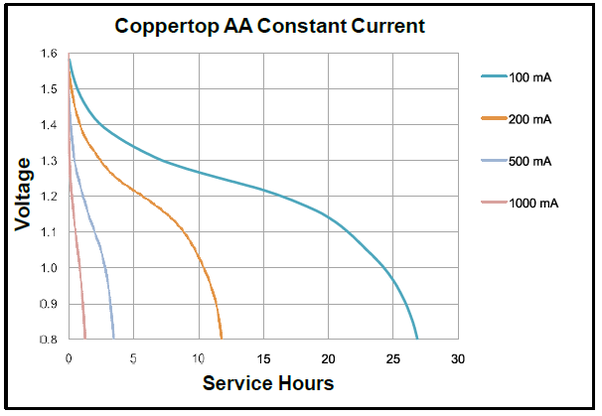 As can be seen from inspection, voltage goes downhill rapidly at any discharge rate needed to sustain an RPi. And while Duracell's graphic shows that 1 Amp may be sourced, this will be be for only a very short period of time, and with a fresh, new battery. Let's choose 500 mA as a practical limit for the maximum current the batteries may source, and use that figure to calculate the power that the batteries can source:

2. Losses are incurred before the power reaches the RPi:

The calculations show the batteries are optimistically capable of supplying 4.5 Watts. However, some of this power will be lost due to the internal resistance of the battery, and the inefficiency of the the buck regulator (any regulator actually). These losses must be subtracted from the power delivered by the batteries. We'll estimate these losses as follows:

Again - the battery discharge curves above inform us this will decrease rapidly over time; the situation is exacerbated by the fact that during startup/boot the RPi will draw more power than it will in a quiescent, idle state. Measurements on my RPi 4B show that it will draw approx 2.5W in an idle state, but the "official documentation" places that figure at 3.0W (600mA). Given that the low voltage threshold is 4.63V, you won't get much run time out of 6 new AA cells.

The "best way" to solve this is to forget about trying to power an RPi from a bunch of AA batteries. Instead, get a rechargeable Li-Ion battery pack. Some are called "portable chargers" or power banks", and supply 5V at their USB output. This eliminates the need for a separate regulator, and the internal batteries can be recharged many times. The other option is a DIY approach - as you've planned, except using a Li-Ion pack instead of AA cells.

However, if you have reasons for pursuing this particular approach with the AA batteries that you don't wish to disclose, and you don't mind laying out more cash for a good quality regulator you could consider a boost or a buck-boost converter. These converters have the advantage of allowing you to put your batteries in a parallel arrangement. Some of them are also more efficient than the buck converter. This table provides a fairly comprehensive overview of the characteristics of the various topologies. You want a topology that has a Yes in the right-most column ( Vout > Vin ). But you should keep your expectations very low - the cost will certainly be higher, but the performance advantage over your current setup will be slight.

I had exactly the same issues as you describe here. I was also following instructions from the book Learn Robotics with Raspberry PI. For my project, I was using pi 3 model b+. I solved the problem by replacing the battery holder with another one of better quality. If it helps, this is the battery holder I used https://www.ebay.co.uk/itm/133616385476

Not the answer you're looking for? Browse other questions tagged power power-supply boot-issues alternative-power reboot or ask your own question.