Is using a powered hub with the Pi safe

I read recently (I don't remember exactly where) that you could power the Pi from a "cheaper" USB powered hub. I just tried this, and it works.

On checking the Pi schematics, it seems the USB port Vcc pins are directly connected to +5V0, whereas the 5V Power micro-USB goes through the poly fuse.

I don't know what the specifications of USB powered hubs are supposed to be, but if they are just feeding +5V0 to the USB port Vcc (as the Pi itself does) this makes the poly fuse a joke for anyone using a powered hub, and all warnings to people attempting to power their Pi through the P1 port a bit academic.

PS I know similar questions have been asked before. I further tested and the Pi voltage between TP1 TP2 was 4V45, while the 3A PSU supplied 5V25 (off load). I assume this means that the Hub feed is via some circuitry (probably a diode), so if the Pi is using its own PS it should reverse bias the diode, and be "safe". Powering the Pi via the Hub (mine at least) is below the minimum recommended voltage.

Some hub backfeed power to the Pi.

Either buy a hub that is verified to work, or open the usb cable and snip the 5V line, preventing backfeed.

Make sure you have 2 usb cabled between the hub and the Pi as illustrated below. One for power from the hub to the Pi. One for data from the pi to the hub. 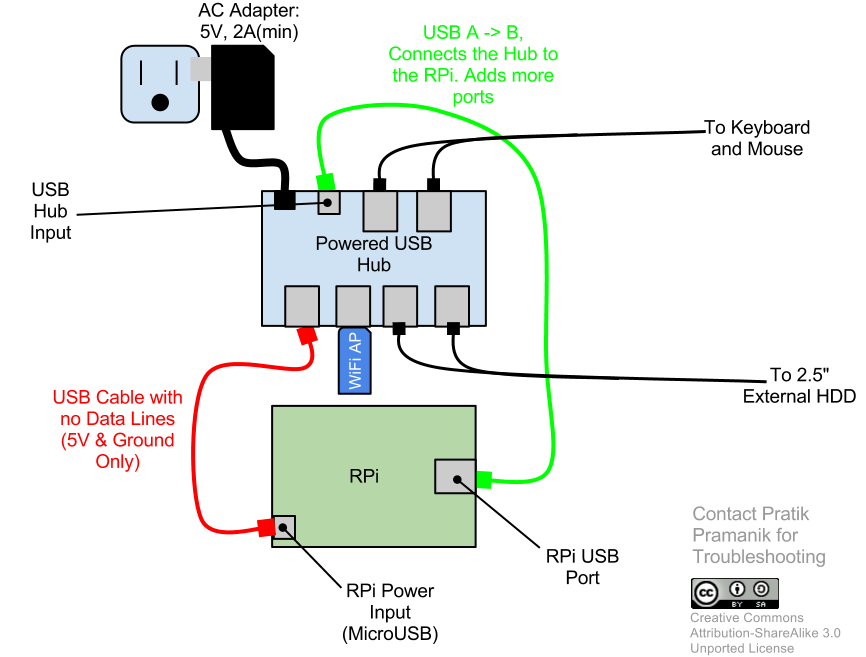 I use a powered hub and I don't have any problems with it. I use the CyberPower 7 port hub.

Not the answer you're looking for? Browse other questions tagged power or ask your own question.

3
Can I power two Raspberry Pis from one Powered Hub?
5
How to know if Raspi is bricked
0
Does backfeeding the pi allow me to draw more current than normal from the other free usb port?
2
Wire 5v to raspberry pi b+ without microUsb
1
Tapping into 5v power
1
Can I use the USB Hub to power the Raspberry Pi Zero?
1
Multiple questions about power and USB hubs