I want to use my RPi4 as a small home NAS. To do that, I'm trying to benchmark the maximum file transfer performance.

I get the following results:

Question: which maximum transfer speed over SFTP from RPi to computer do you get? if possible with a similar workflow from above: RPi + computer with ethernet cables, no Wifi, transfer a file from RPi (in RAMdisk) to computer (on SSD)

I have an Rpi4 8GB with a WD Elements 2TB USB3 external HDD (USB3 powered from the Pi) and a Seagate Backup Plus USB 3TB (with its own power supply), both shared by the Pi using Samba and I can get 100 Mbyte/sec each way from either on my LAN, maxing out the Gigabit Ethernet. SFTP is slow because of encryption/decryption. Also, if the drives are formatted NTFS then any Linux server is going to bog down because of the CPU load. My Samba shares are formatted ext4.

(2) The same file from Windows PC to Pi 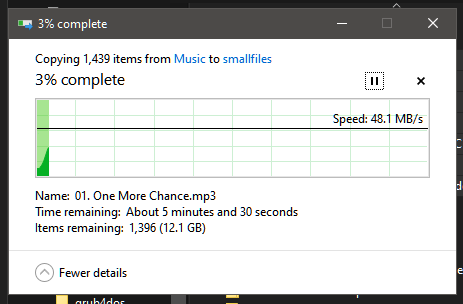 (4) For comparison, using WinSCP for an SFTP transfer from Pi to Windows PC. 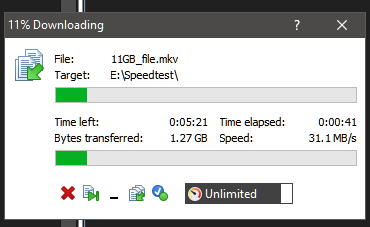 Another factor is power. Although earlier Pis may work fine with various "charger" type wall warts which the owner may have lying around, the Raspberry Pi Foundation makes clear that later Raspberry Pis, especially the 3 and 4 models, are very fussy about power supplies, and for the 4 the official PSU is strongly recommended. Devices intended for battery charging duty may allow the voltage to sag below 5V when current draw goes over a certain level. You want 5.1V / 3.0A DC output, and it must be capable of doing both these at the same time!!! This goes double if you are powering external devices via the PI. The total USB draw allowed is 1.2A, which is, realistically, ONE external USB drive. Really people purchasing the Pi 4 should order an official PSU at the same time.

My problem was a combination of two factors:

Now that I bought the official RPi power supply, it is no more throttled (throttled=0x0), and I can enjoy 110 MB/s speed when transferring from RPi ramdisk to computer over a Samba share (both RPi and computer with 1Gbps ethernet cables). 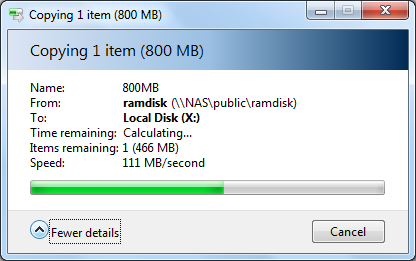 I did a similar test in the other way, sending from computer to RPi (ramdisk), and I get similar speed: 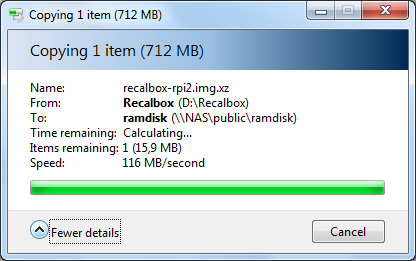 Now the tricky thing will be to find the best filesystem both readable on Windows (if one day I need to connect the external HDD to Windows), and having good write performance on RPi (exFAT? NTFS? etc.), but it's out of topic for this precise question

Not the answer you're looking for? Browse other questions tagged networking usb ethernet usb-power performance or ask your own question.

35
How Raspbian Detects Under Voltage
29
Does the Pi 4 resolve the Ethernet+USB bottleneck issue of past versions?