I have a GFI outlet that gets tripped randomly, resulting in a big pool of water in my basement when the condensate pump stops running.

I would like to plug a Raspberry Pi in the other outlet, and get a notification (e.g. by email) when the Pi goes offline. It's no problem if it takes even an hour or so to alert me. There is a version of this for a Photon board here. I have an old Pi lying around, so I'd love to use that.

The photon board seems to have an established IFTTT integration. I see that it is possible to communicate with the Pi via webhooks, but I wonder if there is something even simpler to just see whether it's up and running.

Thanks for any leads!

There are several ways to do this. I guess the Photon board would work, but $29 seems a bit pricey - and a B-O-R-I-N-G project.

Here's how I might do this if it were my project: 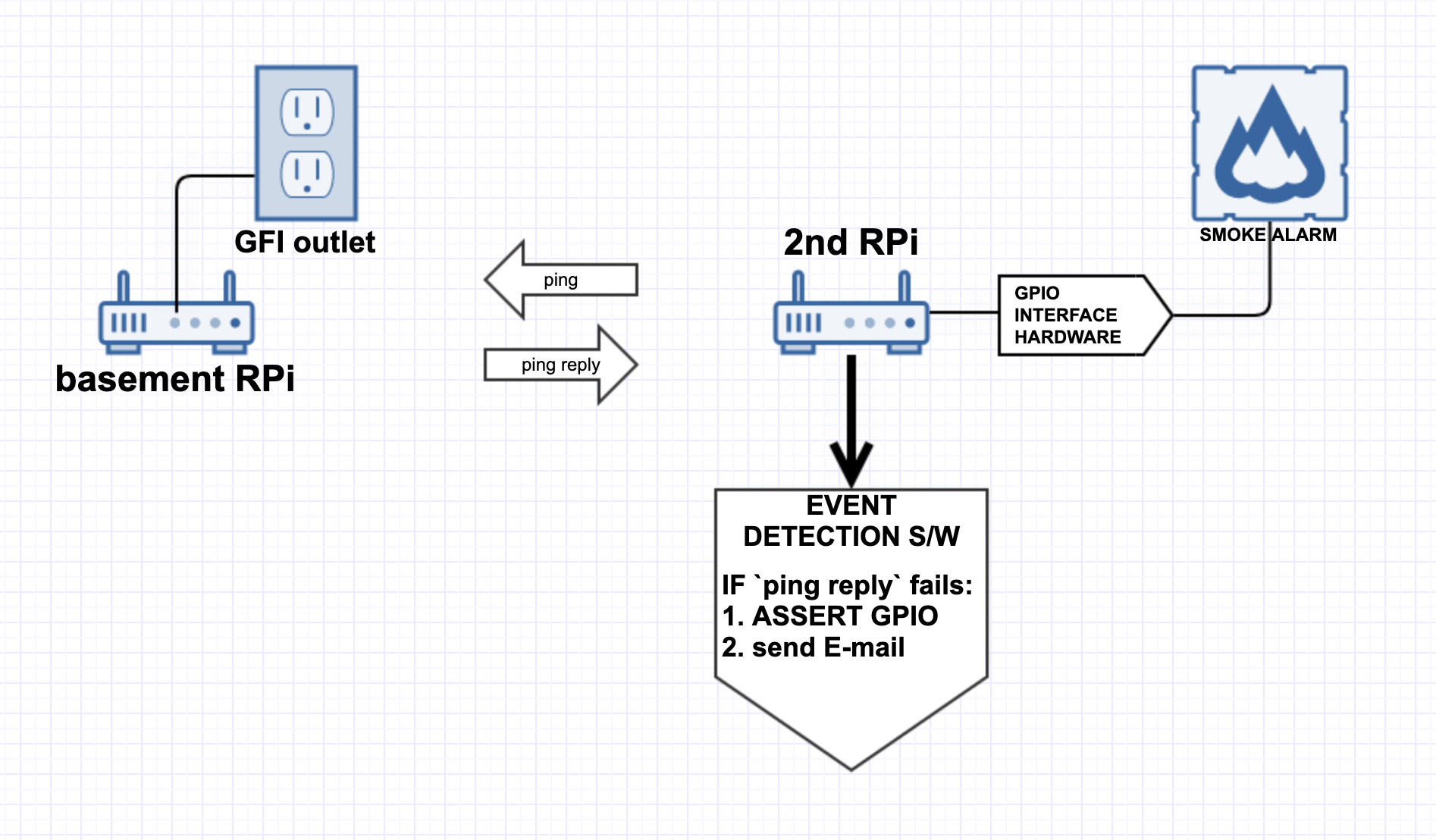 First - an email alert is useful (if I'm out), but I wouldn't depend on it to wake me from a sound sleep. I want an annunciator for when I'm in the house, and email when I'm not - I want both of these alerts.

Second - I don't want a battery-powered RPi as part of the solution - more complexity, less reliability & more expense. Instead, I'll use a "2nd RPi" (or any PC/device with a network stack) to monitor the "basement RPi". One simple way to implement the event detection software is:

This may be implemented in Python, a shell script - or virtually any other programming language. And obviously this scheme requires both RPi's to be connected to a network.

Third - send an email message from the 2nd RPi (or PC/whatever). Again, several platform-dependent ways to do this, but here's one way that uses RPi's mail program, a GMail account in a simple Python script..

As with all things, there are YouTube videos that illuminate the way... I didn't have time to find a good YT video; this one covers the essentials of the push-to-test hardware in a small fraction of the total run time.

The event detection software described above will do two things once it has detected the "basement RPi" isn't responding:

The GPIO pin will actuate the annunciator through a hardware interface - a relay, or a transistor switch. There are numerous Q&A here that explain this (one example)

Finally - This is only an outline - an approach if you like - to meeting your requirement. It's an interesting project IMHO - you'll have learned a lot when you complete it. You may have specific questions as you work your way through the project. We'll try to help with those also.

Following the suggestion of @jsotola, I managed to solve this, using only stuff I had lying around the house, and following @Seamus's suggestion, I am posting it here. (Also see my comment below for a simpler way.)

Of course, you might not want ssh to be accessible over the internet, even though you changed the password. (You changed the password, right?) uptimerobot has various other options, but I think they will all involve some port forwarding, and I thought it would be cool to be able to SSH in from anywhere, for some unknown future project.

Not the answer you're looking for? Browse other questions tagged home-automation or ask your own question.

80
How to automatically reconnect WiFi?
1
Issue with a 12v switch via GPIO output