How do I connect a Raspberry pi to ws2811 LED lights through GPIO18 pin?

Before I start, I should note that I have never used a raspberry pi before, so my only experience is trying to get this project to work. 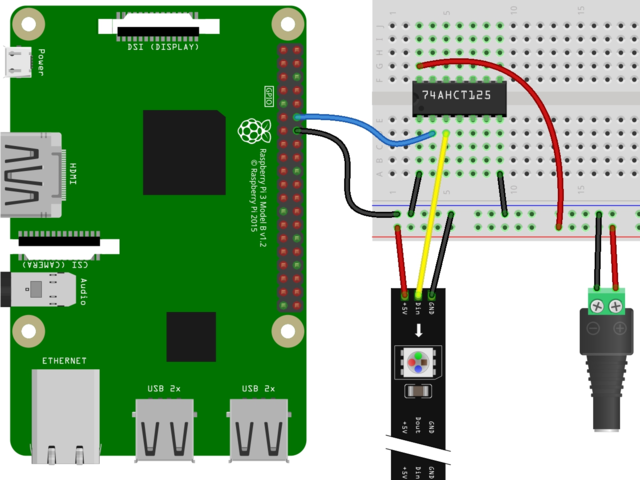 When I plug everything in with a 5V 10 Amp power supply, nothing turns on even when I run the code. However, if I unground the pi then the LED lights start flashing randomly.

The current steps that I have taken to try and fix the error: I checked my circuit and made sure the level shifter was properly oriented and the pins of the level shifter were correct according to the tutorial. I also tried directly connecting the DI line to the LEDs and was able to control the lights properly (obviously the LEDs were very dim but it was a proof of concept).

I was hoping someone could help me as I am completely lost at this point. I have exhausted every idea to fix the error and can't seem to find answers online that don't already match the circuit above.

I also have a side question about powering my pi. Can I power the pi using the power supply too or do I need to power it through a micro USB cable? Thank you.

Edit: When I directly connected the DI line to the pi, I did not use an external power source. I just wired the pi's power, GPIO18 pin, and ground directly to the LEDs. This allowed me to control the lights, but the pi does not provide anywhere close to the necessary output, so the one light I had it turn on was dim. I just tried directly connecting the DI line to GPIO18 without level-shifting, but still connecting the LEDs to an external power source and am having the same issue as before. This time when I unground the pi, the lights are all white, even though I am telling them to be red and green ((0, 255, 0) and (255, 0, 0)). Here is the code I am running:

I tried connecting the unused /OE and inputs of the level-shifter, and it did not seem to work. However, it definitely did something. I checked the voltage of the data line output and without the added connections the Voltage was ~3.3 V. With the connections, I got 0.15 V. The black lead was on GND of the level-shifter and the red lead was on pin three of the level-shifter. I investigated what happened if I unplugged the GND of the pi and the voltage went to ~1.5 V. I also tested the power supply and got ~5 V as expected so my multimeter seems to be working. I might just choose a different way to transform the voltage. I should also note that I did check that the input is going in from the correct direction.

Here is an image of directly connecting the pi and LEDs: https://ibb.co/SwpzNHz

The 74HCT125 is a tri-state buffer, but you can use it as a level shifter. If you look at the datasheet page 3, you will see that the minimum voltage for a high input is 2V, which is lower than the 3.3V the Pi provides.

Are you using a breadboard like the drawing? Have you checked your wiring? Note that there are two pins on the 125 that is connected to ground. One for power supply and one for enabling the output.

Not the answer you're looking for? Browse other questions tagged led ws2812 or ask your own question.

2
Why are my LED colors in GRB and not RGB?
3
Powering up a WS2812 led strip with different power supplies
4
Control 5m of WS2812 LED Strip: Wire it up
0
Very simple flashing 8-LED ring and button on Raspberry Pi 3
0
help reconstructing blinking LED circuit that required GPIO #17 pin low rather than high
1
Risks of powering short LED strip directly from GPIO
1
Powering LED strip off a raspberry pi zero - works but lights at end of strip fade
1
RGB Led flickers when controlled by GPIO Raspberry