adding the Keyboard Layout Handler to my panel, right clicking on it, changing settings to include both US and JP keyboard layouts. the alt+shift keyboard toggle does change the flag icon to the next language, but when i actually type, i don't get any japanese characters, but regular old english letters. i've also noticed that when i hit the "close" button, the dialogue box doesn't actually close, so i don't know if that's related. 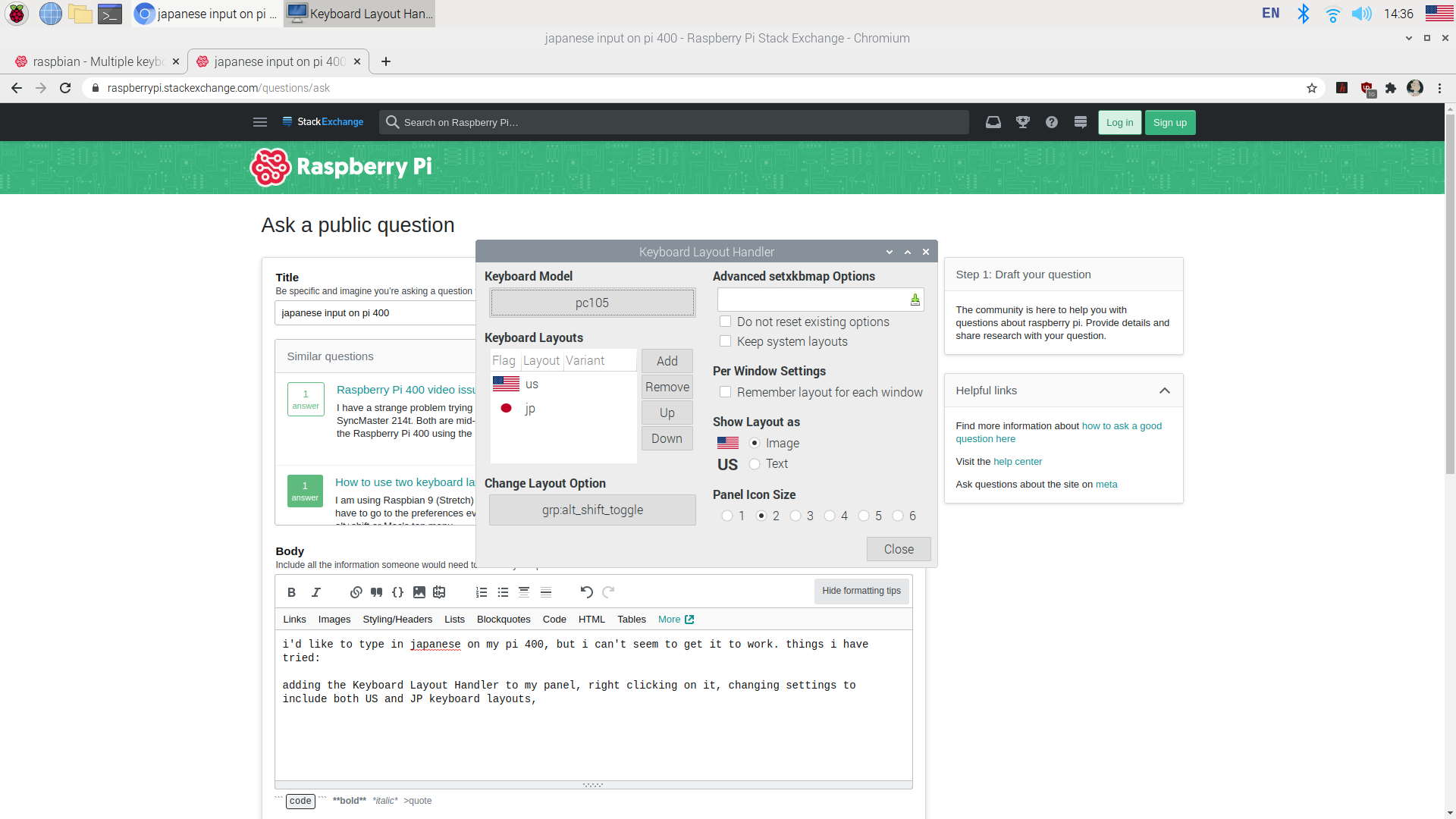 i've also tried doing what i think is the same thing, just via the terminal, putting in

and then adding this to the end of the file:

this produced the same result, i could change the flag, but couldn't actually type in japanese characters.

i also tried installing ibus/anthy via the add/remove programs interface, and i did get the box on the panel that let me switch between english and japanese, but again, when i tried to actually type, i didn't get any japanese characters, only english letters.

i did sudo update and full-grade my system this morning, and the japanese input still doesn't work. i don't know if i'm missing something obvious, but i figured i'd ask. thanks much~

I got this from a Japanese-language website. It uses mozc and ibus.

You’ll see a keyboard symbol in the upper right part of the taskbar. Right click on it. Click preferences. Click the input methods tab. Add Japanese-Mozc.

Now, you should see EN where the keyboard icon was.

Left click on it, and you can choose between English and Japanese input.

The default for Japanese is “direct input”, which isn’t what you want, probably. It’s indicated by a capital “A”.

Left click on the “A”, and you can choose what you want to type.

If you choose the Japanese “あ” you can input hiragana and kanji.

If you right click on the taskbar icon again and go to preferences you can set a new keyboard shortcut for switching between input methods.

Not the answer you're looking for? Browse other questions tagged keyboard or ask your own question.

4
Creating an Android "remote" app for Raspberry Pi (Raspbian)
1
How do I specify the layout for my 78 key keyboard
4
Raspbian, Kodi uses keyboard as a remote, not to type
3
Keyboard and mouse don't work in GUI
3
Permanently set keyboard repeat rate on Raspberry Pi?
1
swap control and capslock as default (especially for virtual display)