DHCP server (dnsmasq) only working on one interface

I'm trying to get a DHCP server working on two interfaces so that I can use my Raspberry Pi as a standalone server to perform various tasks. So far I've installed hostapd to set up a wireless access point, and also dnsmasq to sort out the DHCP server aspect.

This seems to work fine with the wlan1 interface, but for some reason it won't provide DHCP when I'm connected via ethernet (eth0).

According to the documentation, adding another interface is as simple as duplicating the interface= line, but it doesn't seem to be working for me here. Any ideas why?

The ethernet post does seem to have an IP of its own: 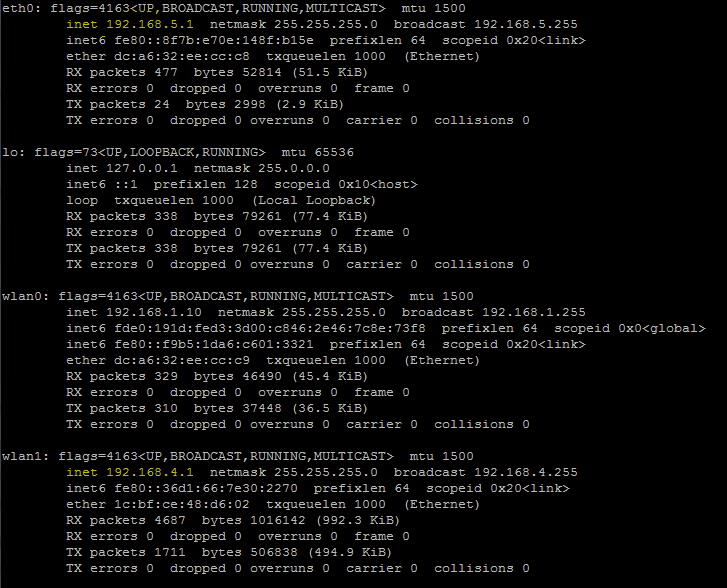 Silly configuration error. I'd forgotten to configure eth0 in dhcpcd.conf.

I also updated dnsmasq.conf to have different subnets and configs for each interface and it works as expected;

Not the answer you're looking for? Browse other questions tagged dhcp or ask your own question.

2
Why won't dnsmasq's DHCP server work when using hostapd?
1
Dnsmasq DHCP Server Not Assigning IP Address
1
Can't set eth0 static IP or gateway using DHCPD.conf or /etc/network/interfaces
1
Why can't my Raspberry Pi get Internet access from laptop via ethernet?
0
Pi as DHCP server, but getting "unknown interface eth0" with dnsmasq
0
Need Two IPs (using wlan0 interface) but do not have any control over static allocations