Raspberry pi with HDD and SSD not booting on reboot

I have a Raspberry Pi 4 B with 2 disks connected via usb. One is an SSD and the other is an HDD. Both of them are in SATA to USB cases that have their own power supply each.

I've configured the Rpi4 to boot from USB, and put the OS in the SSD. The thing is that if I turn down everything, then turn on the SSD and the HDD and the same time, then turn on the RPi4, it all boots normally (the HDD takes some time to warm up and the SSD is faster)

But then I do sudo reboot and for some reason the RPi4 does not boot. I think this is because the HDD somehow manages to answer faster than the SSD and the RPi4 thinks there is no bootable external disk (because the HDD is not bootable) so it just hangs there without booting.

If I turn off and then turn on everything again, it boots normally, but whenever I do reboot it just hangs again.

I've done some research but all I could find is some posts that recommend editing the file /boot/cmdline.txt to something like this

I've also seen that some people say that this happens because the power supply is not enough but I have the official Raspberry Pi power supply in both cases, each HDD has their own power supply and this is still happening so I'm not sure if that's the problem.

I've attached a screen to the RPi3B for testing just to see if it outputs something when it cannot boot, but it does not show anything at all, in fact, there is no output from the HDMI, the screen says it doesn't get any input.

I have also noticed on the usb dock that is connected to the RPi3B that when i swap places between the ssd (that has the boot info) and the hdd, only the hdd lights blink, the ssd ones do not, so i assume that the RPi3B reads first the hdd and doesn't even bother to check the ssd.

I've tried to put a monitor to the RPi4 to see what does it output, and this is the output 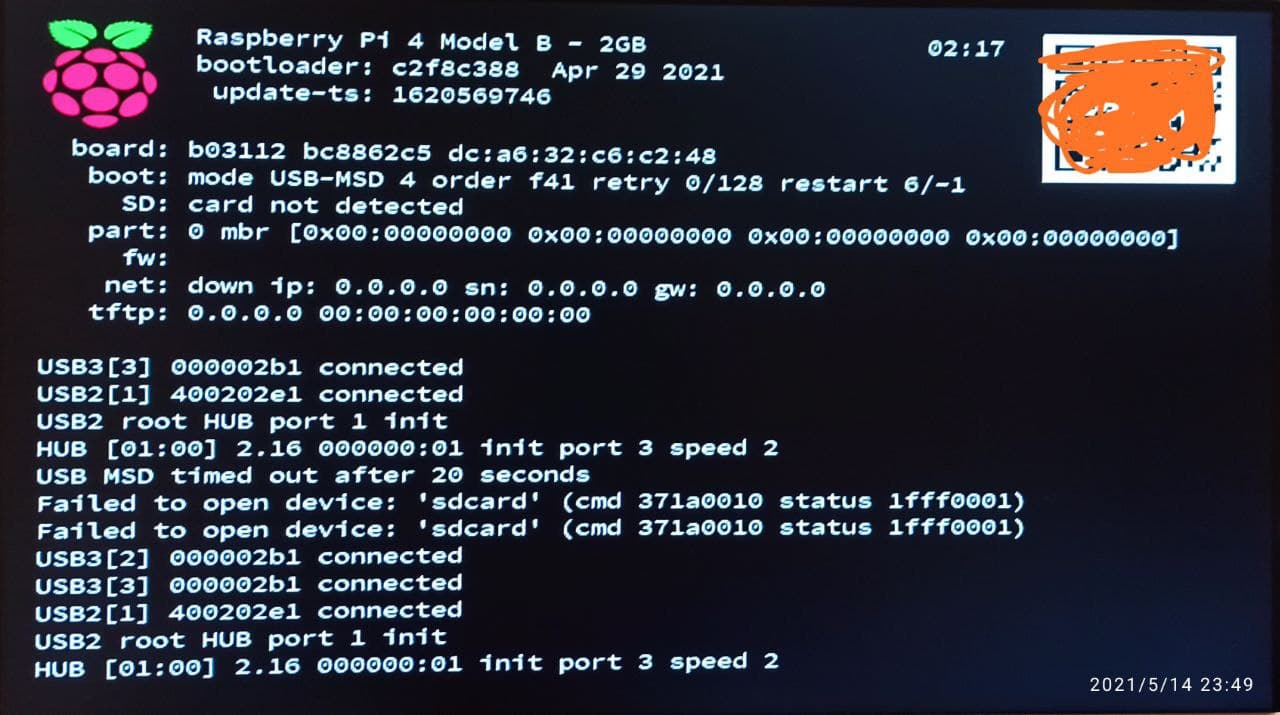 Every 20 seconds or so, the last 10 lines output again (it seems stuck in a boot loop)

The RPi3B does not output anything.

How can I fix this?

I fixed this by buying the same dock I use on the RaspberryPi3B and putting the SSD on the slot A and the HDD on the slot B. Any other configuration makes the Pi not boot. I guess it's because of the HDD enclosures but I'm not 100% sure

Not the answer you're looking for? Browse other questions tagged pi-3 boot pi-4 boot-issues reboot or ask your own question.

0
External HDD causes SSD to not boot, but works fine when plugged in later