I'm trying to use my RPI3 in order to read datas from ethernet communication and send them over wifi to a remote FTP server.

I've been able to connect my RPI3 to internet via wlan0 so far, however I've had troubles configuring the eth0 part of the network.

My problem mainly revolves around how I should handle eth0, I've read that in order to avoid issues I shouldn't use the same IP address as wlan0. But if I do that what adress should I put in eth0?

I might add that for software reasons I can't use DHCP to allocate addresses automatically, I can however change the connected device adress and gateway if I have to bring him back on the same subnetwork as wlan0.

Second strange point, when I add an IP route via "sudo ip route add" ways, it disappears upon reboot. I thereby tried to add it in static through DHCPCD.conf but it doesn't show up in ip route.

Here are both IP route and DHCPCD upon RPI3 reboot: 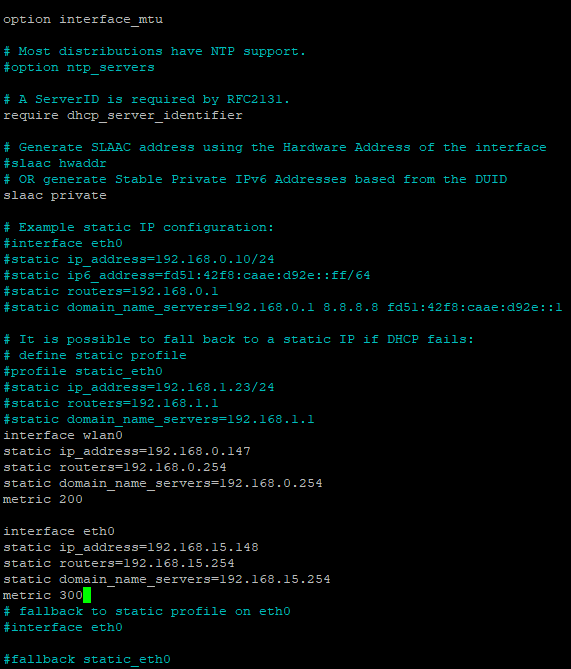 pi-3 networking ethernet-port
Share
Improve this question
asked May 28 at 12:19

The connected device on the wireless network is already in a different subnet than the wifi router, so you can't use the same IP on both interfaces, because it would be in the wrong subnet.

The easy answer would be to configure the port for dhcp and let the network pick an address. But if you don't have a dhcp server on the subnet or have to manually configure it, here is what I would suggest.

Not the answer you're looking for? Browse other questions tagged pi-3 networking ethernet-port or ask your own question.