Will RPi suffer from the Y2K38 bug?

It hangs after reaching Y2K38. Not only the SSH session itself stops responding, but OpenELEC freezes as well.

That, or your question will get a lot of upvotes in 24 years. 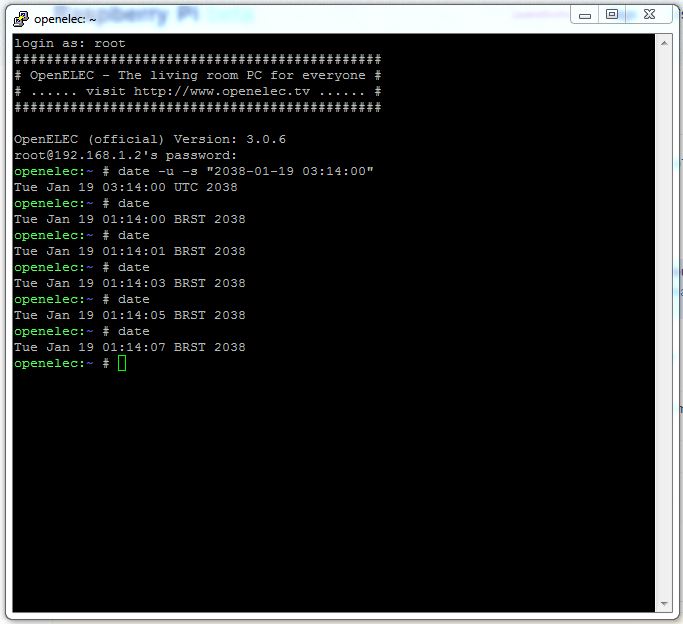 Actually the Raspberry Pi (hardware) will be fine. It doesn't contain a RTC, so it's going to be dependent on which OS you use.

But IIRC all 32bit version of Linux do have this issue. Sometime ago (10yrs or so) Linus said that he wasn't interesting in fixing this on 32 bit platforms and all 64bit Linux platforms at the time had 64bit time_t. He may have changed is mind since then of course. The best link to this I can find is http://permalink.gmane.org/gmane.linux.kernel/1184914 - which isn't the same , but expresses a similar intent.

It won't be a particularly difficult thing to change, but it would force a change in the the kernel ABIs. Which is a problem in itself.

Android, of course uses the Linux kernel. And I'm sure I've missed other options.

As is currently implemented, the Raspberry Pi will suffer the fate of the listed bug, if no changes in software are made.

Most modern machines are making the jump to 64bit processors, but I wouldn't be surprised at all to still see 32bit mainstreamed processors at that point. There are software solutions that could and will have to solve the problem.

It seems to me that the most likely fix would be to update Epoch time to start at something like January 1st, 2000. While this wouldn't delay the bug, it would certainly reset it for the foreseeable future.

Not the answer you're looking for? Browse other questions tagged hardware system-clock bugs or ask your own question.

4
What is the point of the spikes on the Raspberry Pi?
4
Interfacing with a second RPi?
0
Considerations when choosing the stepper motor for the RPi
2
What are the vcgencmd measure_clock 26 and 50?
3
How to go from prototype to production
0
Raspberry PI B schematics and hw drawings