Any particular reason why my RPi 3B+ reports 20x worse results from Speedtest.net? [closed]

Ask Question
Asked 6 months ago
Active 6 months ago
Viewed 73 times
0
Closed. This question is off-topic. It is not currently accepting answers.

I have RPi 3B+ connected to exactly the same router as my PC (wired!).

I have installed Speedtest.net client using this guide. When executing speedtest-cli --simple, I am getting nearly exactly twenty times worse speed results than on my PC: 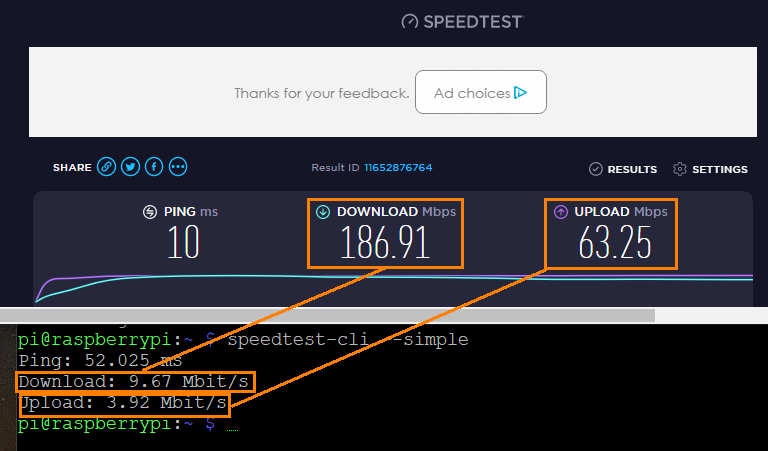 This isn't "today's a bad day" because I am observing such deviations for days, if not weeks so far (anyway, as long as I am measuring this).

Can someone explain me this quite odd behaviour?

EDIT: Both PC and RPi are wire-connected (so no Wi-Fi related issues are asked here).

EDIT: Someone could think that this is a question about 3rd party software (speedtest-cli) and thus off-topic. It is not. The very similar results (very low download speed in compare to overall network speed) I am getting in many other places and when fetching data from many other sources (i.e. apt upgrade for updating packages and wget for fetching files from various sources). This question is about RPi hardware (RJ45 port and chip that controls it) and its quality, performance or speed.

First, even ignoring possible issues with wifi vs. wired networks, the pi 3's network can't quite provide full bandwidth to a 1G network, although for an external connection, this might not matter as it is likely slower than what the pi can provide.

The bus between the pi cpu and the network interface is shared by other devices (like possibly usb, serial, others, possibly even in the same chip), and if those devices are active, it can slow the network down further.

These problems are typical for inexpensive small form factor single board computers similar to the pi, with differing levels of issues with shared buses, shared I/O on the same chip, and lack of hardware offloading of I/O.

I think the "speedtest-cli" you are using (installed via package managers) might be broken or might have bugs.

Near the bottom of https://www.speedtest.net/apps/cli 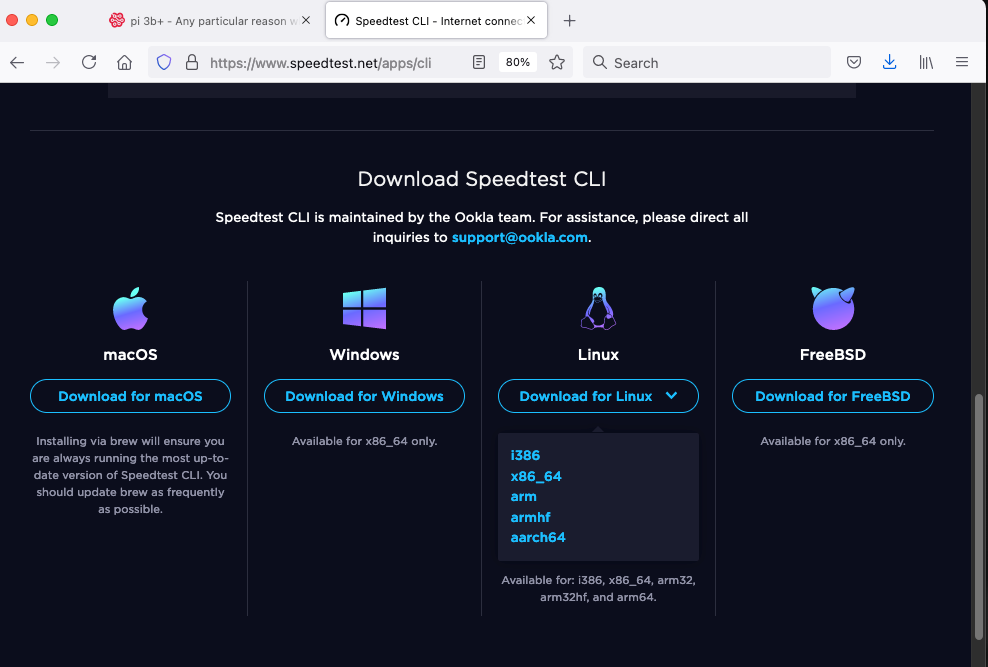 I believe you can find the architecture of your system with this command: dpkg --print-architecture

UPDATE #1 For those who are not sure how to download files from a shell, here is an example: wget https://url_of_the_file_you_want_to_download

Not the answer you're looking for? Browse other questions tagged pi-3b+ internet or ask your own question.

0
Why does my pi disconnect from the internet after leaving it on for a day?
4
Unable to use SSH from internet though it works fine over local network
4
Why can't I connect to my Pi with SSH from outside my LAN?
8
Netbooting multiple "workers" RPi from a "master" RPi
0
RPi PWM issues - (re)start results in oscillating pin