How to print temperature on nextion screen

I am new to the topic of raspberry and sensors, I am doing a project with a raspberry pi 4 and a temperature sensor DS18B20, I created a small project in python to display the temperature in real time.

Now what I need is to display the temperature on a nextion screen, I already loaded the interface to the screen, I created a variable called "celcius.val". but I don't know how to get the temperature from the sensor and print it in the variable. 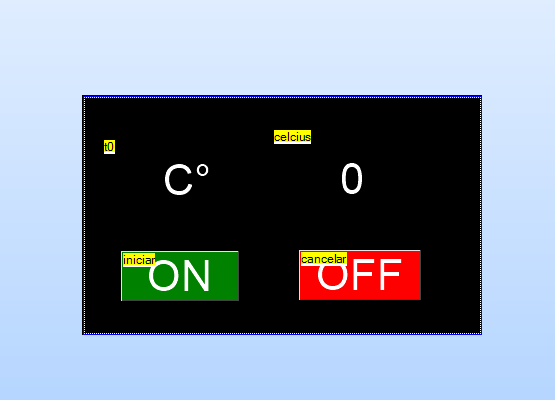 Since Nextion instruction sets are sent over serial, you would need to:

Not the answer you're looking for? Browse other questions tagged raspbian python sensor or ask your own question.

8
Raspbian /sys/bus/w1/devices/ is empty when having multiple 1-wire DS18B20 temperature sensors
9
Why does the Sense Hat / Astro Pi show the wrong temperature and humidity?
2
DS18B20 Temperature sensor
1
DS18b20 w1_slave file stamp doesn't change
1
Connecting multiple sensors to Raspberry Pi 4 B
1
Print the amount of vibration on the screen in C
0
how can i get real time data from the raspberry pi sensor to my android app?