I am working on a project that requires:

My plan is to use a Raspberry Pi to create that open WiFi network, then use another Raspberry Pi as the exploitable device. I know there may be CPU architecture issues.

Since Ubuntu 8.10 has a known exploit, I want to know:

1.2) If so, are there specific models of Raspberry Pi that would or would not work with Ubuntu 8.10? I own 4Bs, a 3B+, and multiple Zero Ws. I could possibly get others as well if need be.

2) What kind of software would I need to make installation media with Ubuntu 8.10 for a Raspberry Pi?

If this turns out to not be feasible, you can expect a question along the lines of "What OS can I use on a Raspberry Pi that has a known exploit?".

Thanks for all y'all's help.

I'm pretty sure you won't be able to run a 2.6 kernel on a Pi without a major rewrite, which could even accidentally fix the vulnerability you're after.

If it doesn't have to be a kernel vulnerability, my advice is to pick one in application software, e.g. Apache or PHP. It's much easier to build an old application SW from sources, compared to the kernel.

PS. I remember there was a discussion about a bug in sudo, which should still be present in Raspbian releases from 2020 and older. That's not a network-related bug though.

I understand your requirements and after all that I want to suggest you Lubuntu [just a lightweight ubuntu flavour] this is its official website, also its mentioned on Ubuntu's official website. 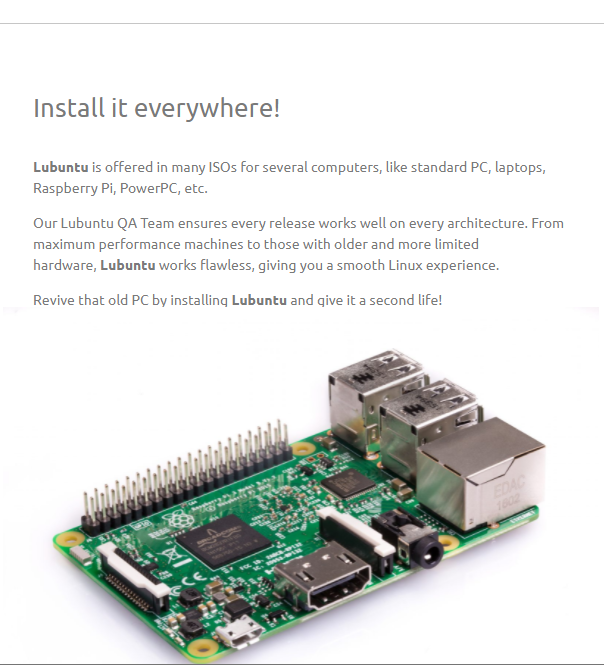 Not the answer you're looking for? Browse other questions tagged boot linux ubuntu compatibility software-compatibility or ask your own question.

1
network setup when installing ubuntu core on raspberry pi 3
1
How to install UBUNTU MATE without another computer
2
How do I enable wifi before login on ubuntu-mate running on a Raspberry Pi?
0
Ubuntu 20.04/gnome wifi and bluetooth in Settings
4
RPI 4B - Bluetooth unavailable on Ubuntu 20.04
0
Ubuntu MATE thinks it knows my IP address but is wrong
0
How to run GitLab through Docker on Raspberry Pi 4b on Ubuntu Server?