I'd like to execute a shell script for some pre-configuration tasks on the first boot. I found systemd.run like this in the cmdline.txt on the boot partition:

During the troubleshooting, I minimized my_init.sh to just return 0:

But this minimal example still doesn't work: During the boot, the screen went off and only the red power LED keeps being active. Since the output logs are written fast, I made a video to see if there is any usefull output: 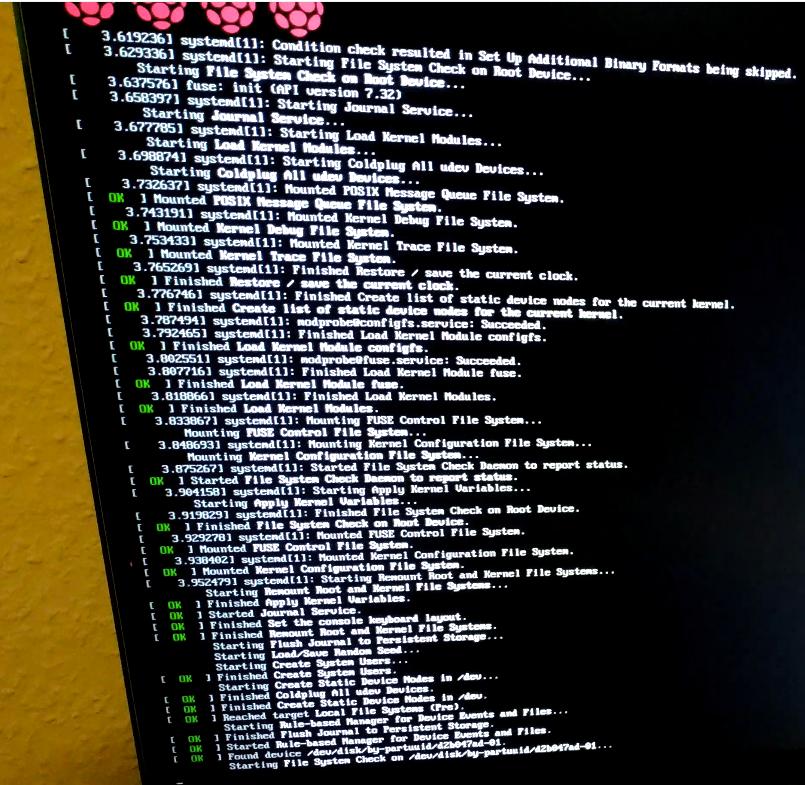 Starting File System Check is the last line, then the screen went black. I found this documentation which indicates that shutting down is the default action. It seems a bit odd to me that this happens before a file system check without any log messages, but it could explain this behavior.

I also tried systemd.run=/boot/ulabs_image2card_init.sh systemd.run_success_action=reboot without any difference. After adding systemd.run_failure_action=reboot the Pi was rebooted. So it seems something went wrong, but what? The minimal script just return 0 which should indicate success. Setting the execute bit doesn't help, too.

It turned out that the script uses CR LF (\r\n). Since I currently used VS, I was running Windows instead of Linux without remembering that Windows uses CRLF as default, where Linux/Unix uses just LF (\n) without CR.

I couldn't find a way to get more logs. It become clear when removing the directives from the cmdline.txt and tried to execute the script manually. After using LF instead of CRLF, the script was called and then the PI rebooted when having

set without systemd.run_failure_action=reboot. To give it more sense, we need to add sed -i 's| systemd.run.*||g' /boot/cmdline.txt in our init script. This removes the systemd.run directives from the kernel parameters after the first boot, so there is no endless boot-loop.

For me this seems much easier than a modified approach of Raspbian or overriding the init parameter. I think overriding the ini parameter is a more general approach, which is good for either getting a deeper understanding how the boot process works or if systemd is not avaliable (e.g. on Alpine). But since Debian has switched to init.d a while ago, I'd prefer this approach. Using systemd.run makes our init script much smaller, because we don't have to care about things like mounting and unmounting disks.

Not the answer you're looking for? Browse other questions tagged kernel systemd or ask your own question.

17
Use /boot/cmdline.txt for creating first-boot script

7
OSMC: how to execute a script with systemd at shutdown
1
Raspbian Kernel Cross Compiling Peripherals not working
1
Kernel panic-not syncing: VFS: unable to mount root fs on unknown- block(179,6) running Raspbian NOT on top of NOOBS
4
How to avoid fsck at boot timing out
2
On boot open tmux session and start continuous python script
0
How to verify the correctness of a kernel upgrade before performing the final reboot
0
Raspbian: dpkg hangs during raspberrypi-kernel package upgrade
1
Raspbian Stretch unable to start SSH on boot: Problem starting ssh on boot exit 255 when executing ssh -D $SSHD_OPTS?
0
My python script does not shutdown when started during startup