Turn on pi at specific time with RTC to save battery

I'm looking into powering my raspberry pi via a powerbank. I already have a button and a relay to turn it on manually and when the pi shuts down flip the relay back to off position. Now I would like to have the option to power up the pi at specific times. After some research, an RTC seems promising. The question now is if anyone knows some nice off the shelf, low power, RTC circuit that is able to send out a 5V signal at e.g. 10am to flip the relay into the on position. I would prefer to power it directly through the powerbank instead of a coin battery to prevent having to charge the powerbank and switch out batteries.

for more info on the circuit I'm using to manually power on the pi see: Cut power supply to pi after shutdown and power on after button press

EDIT: The RTC would be an addition to powering it up manually. So both options would be possible. The idea is to build an ePaper photo frame that can change its picture when the button is pressed manually and also change its picture at certain set times. The times and photos will be collected from the accompanying website I built.

I also added a sketch of the adapted circuit that I am currently using for manual turning the pi on and shutting it down once it finished its task. I am a bit of a beginner in electronics so it is still very very basic (sorry for the handwriting). 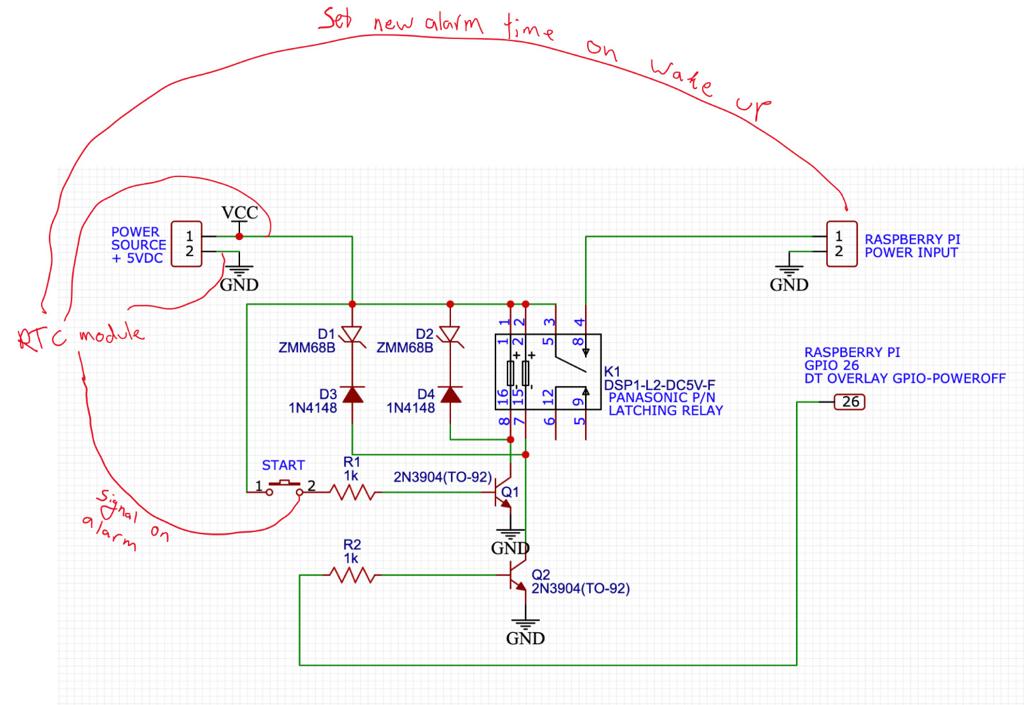 Thank you for the help!

The proposed solution requires hardware and software - including configuration changes to the system. Everything in this proposed solution has been verified on an RPi 3B+ running the Lite version of RPi OS buster.

The following circuit seems to meet the objectives given in the OP. It adds three (3) components that weren't needed in the original schematic: the Real-Time Clock (RTC) at U1, a monostable multivibrator at U2- a.k.a. "one-shot" and a 3.3V regulator to power U1 & U2. 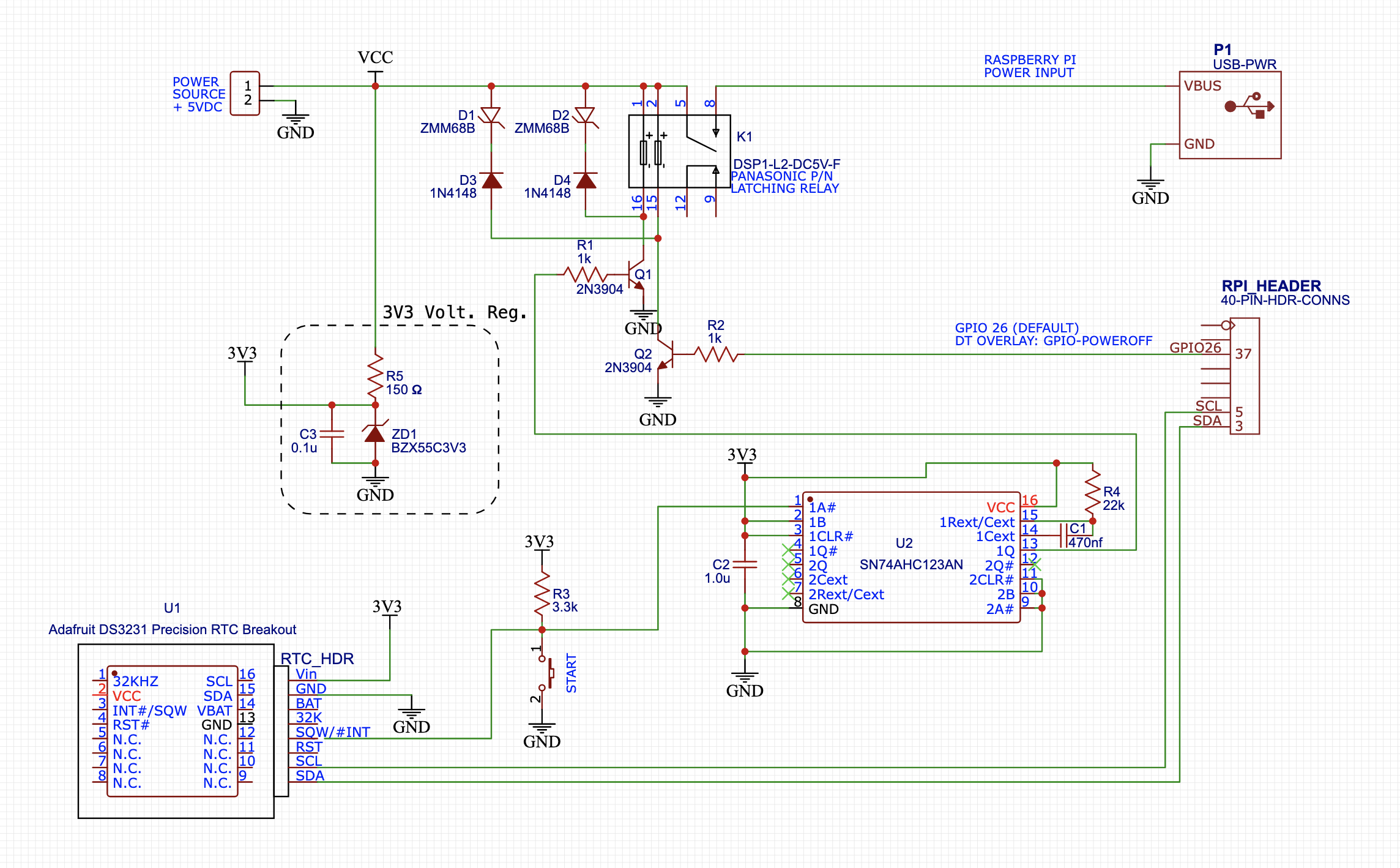 In addition to the hardware, there are some configuration changes to the device tree that will need to be made for the RTC. Setup and verification of the RTC should be done as a first step. The procedure I followed is documented on this GitHub page: Add a Real-Time Clock to Raspberry Pi.

To summarize this procedure, the following entries should be in the /boot/config.txt file:

The "software" component of this proposed answer is intentionally austere. Its function is to automatically power the RPi ON & OFF on a 20 minute cycle - 10 minutes ON, then 10 minutes OFF. This cycle will repeat itself indefinitely.

The following crontab entries and bash script set the ON-OFF schedule, and write the alarm time to the RTC register via sysfs. Please note the root crontab must be used:

Some Background on 'Zero Power' vs 'Low Power':

As of today, there is no RPi capable of reaching a Zero Power state without external hardware. As long as a 5V power source is connected to the RPi, the RPi will consume power. The RPi's rate of power consumption is reduced during halt, but all models will continue to consume power as long as a power source is connected. It may be fairly stated that all of the energy consumed by a RPi after receiving a halt command is wasted energy - unless your objective is to build a Raspberry Pi handwarmer. Obviously, this lack of power management disqualifies the RPi for a large class of otherwise potential applications; e.g. off-grid, battery-powered.

The RPi 4B is the first RPi model to provide what might be called a Low Power mode. However, as of Feb, 2022, a RPi 4B in LPM still burns 150-200 milliwatts after a halt, and also requires external hardware for re-start. While this is a significant improvement from when the RPi 4B was introduced, this level of power consumption is still too high for many off-grid and battery-powered applications - which is a shame.

Referring to the Power Management Schematic:

Two signals and the K1 relay form the core of this design. INT# and GPIO-POWEROFF act through the support circuitry and the K1 relay to either apply or remove power from the RPi. Relay K1 differs from traditional relays in that it is a bi-stable, or latching relay; one of its two coils sets the relay, the other coil resets it. This bi-stable nature is what enables the Zero Power state: Once K1's contacts are set, they require no power to maintain this state. The contact positions will not change unless the reset coil is energized.

Edit: Do not use an RTC without a backup battery

By RTC backup battery, I mean the small coin-cell type battery that is fitted to the underside of the RTC module. The purpose of this battery is to keep the clock running while disconnected from the normal power source. Without an RTC backup battery, if 3V3 power is removed, the RTC will lose the alarm time that has been set, and when power is re-applied it will not know the correct time unless and until the RPi updates it. The RTC backup battery will last a very long time (years) based on mfr-published specs.

ST makes a chip M41T62 that should do what you want. You program it via I2C. It has a watchdog and interrupt outputs that probably will do what you want. There are probably others but this looked the most interesting at this point. It will operate at 1.3 to 4.4V, nicely in the voltage range of the Pi. You will have to make a board for it or as I do sometimes dead bug it (tape to board with double sided tape and solder to the leads).

Not the answer you're looking for? Browse other questions tagged power-supply power-management rtc or ask your own question.

7
What is the minimum power required for an RPi 4 in `halt` or `shutdown`?
2
Cut power supply to pi after shutdown and power on after button press

2
DS3231 RTC not keeping time after shutdown on Raspberry Pi?
0
rtc module in Raspbian Stretch
1
How to hack power bank with timer to power cycle Raspberry Pi
1
Best way to control power supply?
4
Power off Raspberry Pi if charger of powerbank is connected and turn back on if disconnected
0
Battery supplied e-ink photo frame with scheduled wakeup time
0
RTC chip mcp7941x not working with dtoverlay i2c-rtc-gpio
2
Cut power supply to pi after shutdown and power on after button press