Raspberry Pi turned into iBeacon : can't see it on my device (iPhone)

I thought I would give a little edit to my initial question just to add what was the big deal in short! What I wrote at first stays untouched below (the line).

I was having trouble to discover (by either monitoring or ranging it) my Raspberry Pi set to broadcast just like an iBeacon. I tried to use as many Apps as I could (on an iPhone 4S) and the issue here was that I didn't enable location services!!

I am struggling to make it happen : I'd like to turn my RPi into an iBeacon (as there are quite a few tutorials out). I first had a faulty dongle, which I changed. Still it doesn't work right yet. As I am more like an amateur, I seek for help.

what I got working so far is (referring to the common steps described in the various tutorials):

I am now at that point where I activated my dongle (with the hciconfig leadv command) and checked that it is up and running with hciconfig. But when I run an app on my iPhone 4s, to "locate iBeacons", nothing would be shown on my phone. I checked the UUID listened to, it should be correct.

Last point I thought about is that if I run a hcitool scan on my RPi, it lists my laptop but not the iPhone, even tho bluetooth is enabled on both devices. I can't tell why, the iPhone should be working just fine since I could pair it to my laptop.

If you need more informations (screenshots, exact commands,...), I'll try and provide them. But since I can't think about what might be the issue, I'd rather like to go trough a check list, rather than providing tons of infos not related to my problem. Thank you in advance for your time and help.

EDIT : I am adding information about how I am trying to discover my RPi/iBeacon with my iPhone 4S. On the image below, you can see the apps I tried to use and how to configure the ID you are looking for on one : 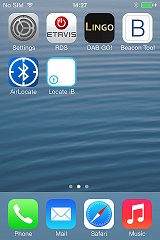 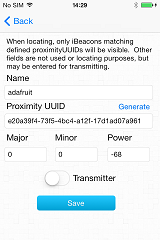 On that second picture, you can see how I entered an UUID. Since this particular app (talking about "Locate iBeacons") seems to give the ability to turn a phone into a transmitter, I tried with an iPhone 5 and my iPhone 4S to make one as transmitter and the other one was listening. Same UUID, major, minor and power values : couldn't "detect" the transmitter with any of these apps.

I tried to listen to my RPi/iBeacon with these 3 apps, using 2 different UUIDs on each (which means, I did 6 tests, not counting my tries with the iPhone 5 and 4S).

I am going to try and sniff some bluetooth trafic in the next days (I know someone having a bluetooth analyzer). But if you think about something else, thank you for sharing!

What resolved my issue was to : enable location services (for the app trying to monitor/range my Beacon)

I did not enable that service at first simply to save some battery life, which is obviously wrong. I came onto it as someone told me that when you are in the developing stage, you shouldn't limit yourself. It led me to check out every setting on the phone.