What options exist to manipulate voltage using a Raspberry Pi, above 5v?

I have a model train set which runs on 0-12v based on the position of a rotary encoder. I would like to have somewhat granular, digital control over the voltage on the track.

So far, I'd implemented one of those bog standard eBay's finest voltage controllers, which has a potentiometer on the input, thus can't be controlled from a Raspberry Pi.

I then moved on to the L298N (see thread in Context), but this produces a few problems - namely a "lumpy" DC output, producing resonance in the motor windings, as well as very rough running. I'm now contemplating adding a smoothing circuit to this, but need to understand the electronics behind it to do so.

Another option I'm looking at is the possibility to use a digital potentiometer in conjunction with one of the earlier mentioned motor controllers, which would theoretically give as smooth running as I had previously on the analog input system, with the addition of digital control.

I've considered an ADC, however these are generally more audio-focused, and in my experience tend to cap out at 5v. If this is the right solution, I could do with some direction in terms of a chip or part number for a board that would work.

I'm currently not sure if I'm trying to reinvent the wheel. I suspect this problem has been encountered before, be that for controlling lighting, audio, motors, or any other auxiliary device from a Pi.

I've recently created this thread questioning how to make this work with an L298N.

XtrmJoshXtrmJosh
11133 bronze badges
New contributor
XtrmJosh is a new contributor to this site. Take care in asking for clarification, commenting, and answering. Check out our Code of Conduct.
4
Add a comment  |

It is hard to answer your question because I do not know enough about your train engines and track setup. Since I have built several over the years (last one 20 years ago) I will take a SWAG. The PWM worked great (about 22Khz with the better engines, such as the Athearn (not sure if they are around anymore). I also destroyed the cheaper ones, it only took a few days and they buzzed like crazy. I ran it with a DC bias on the track (about 6 - 8 VDC) and the PWM was to about 15 volts. The good engines ran very nicely and pulled several cars at very low speeds and no buzzing. I implemented it as an analog design but going to digital should work.

Consider using a DAC to support the DC bias and using a MOSFET for PWMing the high side. The BTS7960 (Bridge, great for reversing) would do a great job for you and the losses will be minimal. It will also do the PWMing if you want. Last look they were in the $8.00 US range. There are a lot of options open to you. The more you get into it the better you will be able to tell us exactly what you are doing. Try putting a schematic together and do not worry we are to help you.

If I understand your question correctly, I think you will need two components/modules:

Get an ESC (electronic speed control) module. These accept a low-voltage low-frequency PWM signal, or sometimes UART-based digital interfaces such as DSHOT, and produce a proper high-voltage high-frequency PWM signal in the output which will not be audible. Just make sure to get an ESC for DC motors (brushed), not EC motors (brushless). DC motors have two electrical lines, EC motors typically have 3.

ESCs are often rated in terms of "S" instead of voltage, where "S" corresponds to the voltage of a Li-ion cell, 4.2V. For 12V you need an ESC rated at least "3S".

I'm not endorsing any ESC model in particular, but here's an example of what an ESC looks like. On the botton there are power (2 lines) and PWM (3 lines, GND, 5V and signal) connectors, on the top there are lines to connect the motor. 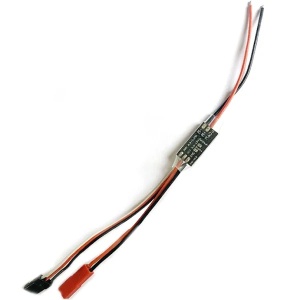 Not the answer you're looking for? Browse other questions tagged pwm voltage dc-motor or ask your own question.