If I plug my headphones into the audio jack, how do I control the volume?

This will be useful to know before I start just in case the volume is turned to the maximum by default.

Also, more importantly, will the maximum volume be high enough to cause immediate hearing damage to children who use a Raspberry Pi with headphones? My daughter's first instinct may not be to remove the headphones if the noise was extremely loud, yet she is likely to be able to turn the volume up to maximum.

Assume that the headphones are a common bud type, which I suspect would be the type that gives the loudest sound for the least power output.

Note: amixer and alsamixer are part of the alsa-utils package. You may need to install this first.

I expect the pi will use ALSA in which case you probably want the command alsamixer from the command line, or maybe there will be a GUI mixer control app.

You should be able to put a command to alsamixer or edit your ALSA config files to lower the default volume at boot time if needed.

According to this page there is a "sound mixer application in your applications menu", though I haven't found too many references to this, so I think what I'm about to say will be as good an alternative.

There is a very useful aumix tool which provides a visual terminal view (see image), though it won't be what kids are used with standard PCs!

There's some info on it here, here is the author's site, and there is always about.com 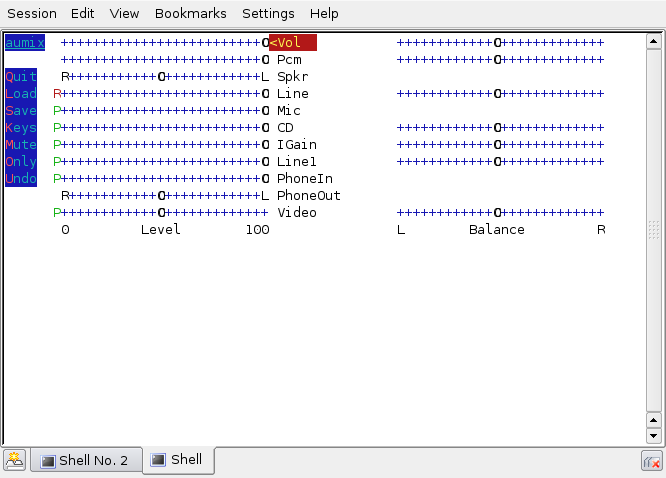 Make sure you are in the user folder:

Create the file .bash_aliases (this will be where I keep all the aliases I make so they aren't lost when I reboot my Raspberry Pi):

In the text editor, add the aliases:

Exit and save: Ctrl+X, Y, Enter

Note: This solution has only been tested on Raspbian systems only (the OS that the OP assumed they would use).

Here's a solution for Raspian with amixer output for both channels Left and Right for the Master control:

alsamixer comes out-of-the-box and has a text-mode "GUI" which works over ssh.

You can use up/down arrows to control volume, as well as numbers from 0 to 10, which means you can turn your mobile into a fancy "remote volume control", where tapping 1 would be the lowest volume, and 9 the highest. 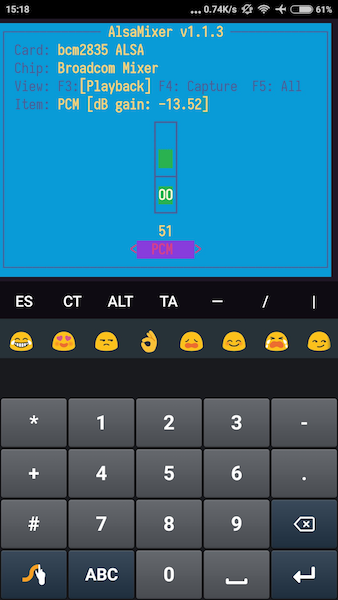 Number keypad mode is available (on android) in gboard, swype, swiftkey, etc. Also many keyboards/roms have the option to show arrow keys.

Use any ssh client of your choice, eg, termux, juicessh (android), or termius (ios/android).

Moreover, if you use termux with the termux-widget (€2.09 on google play, or free if you install via f-droid, since the app is open-source), then you can launch alsamixer by tapping in the desktop widget.

To make the shortcut appear in the widget, create an executable bash script under ~/.shortcuts/pi-volume.sh with the following content:

The -t switch is important here as it allocates a TTY.

Now you don't need to type anything in the terminal on your mobile, just tap the script name in the widget.

(I have no affiliation with termux; I am just a user of the app.)

I propose a physical device that will allow for immediate access to volume if an when your software controlled volume isn't immediately accessible. I was hoping to find one with a volume limiting switch to avoid immediate max volume.

Not the answer you're looking for? Browse other questions tagged education safety audio use-by-children or ask your own question.

20
How to get better Audio quality from audio jack output
2
Can the audio jack of the Raspberry Pi 2 play ultrasounds?
1
How to automatically force audio through headphone jack?
0
Alsa volume control without amixer
1
Setting the default audio output to jack
0
Can I safely connect stereo headphones to the A/V jack of my PI 3B+?