Is it possible to connect a Raspberry Pi to a 3.2" TFT LCD touch panel?

Can I connect a Raspberry Pi to a device like SainSmart 3.2" TFT LCD Display + Touch Panel + PCB adapter SD Slot for Arduino 2560? How hard would it be? 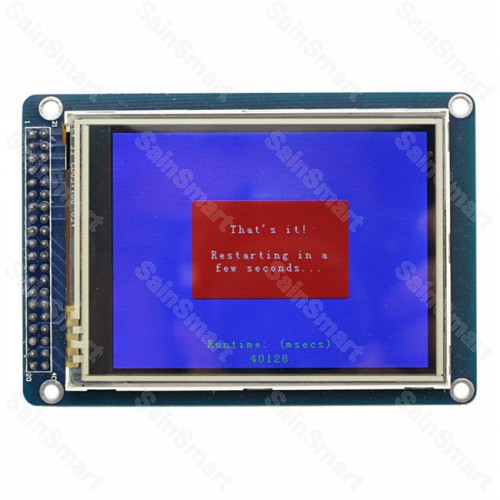 You should be able to connect it OK. Just be careful to check the voltages. The Raspberry Pi has 3.3 V I/O pins. How hard it is, is in the eye of the beholder :)

There are two separate components there, the LCD panel and the touch device.

The LCD panel can probably be driven using 3 or 4 GPIO pins, the touch component will need another few.

The LCD panel also supports parallel mode, which is what you would need to use for the highest speed updates, but the Raspberry Pi doesn't have enough pins for that, so you can probably forget about playing video on there.

The rest is just a matter of writing the software. The Arduino code is probably a good starting place, but you will most likely have to spend some time studying the datasheets too.

EDIT: It appears that although the SSD1289 chip supports 3 and 4 pin serial modes, they are not brought out to the connector. It should be possible to connect it as shown in Connecting an LCD to a non-video-capable Linux device - Intro without using too many I/O pins.

Not the answer you're looking for? Browse other questions tagged touchscreen or ask your own question.