ssh into pi from Mac over direct ethernet connection

I am trying to ssh into pi from my mac's shared ethernet connection. I connected the two and turned on internet sharing (both ethernet to ethernet and wifi to ethernet). To find the assigned ip I have used cat /private/var/db/dhcpd_leases from the mac terminal shown here http://www.interlockroc.org/2012/12/06/raspberry-pi-macgyver. This brings up

so I know it is there, however when I try to ssh to it my connection times out. I've tried nmap'ing it from mac terminal and nothing shows up. I have also tried ping'ing that address and to no avail. Why is that address showing up on the mac dhcpd leases but not work when ping'ing to it which I am assuming is the reason I cannot ssh to it?

I have tried many different methods of directly connecting the Pi to a Mac, with limited success.

It really depends on what you are trying to achieve.

Enabling Internet Sharing works (similar to the method you tried), but only if connected to a router.
This seems of limited value - you might as well plug the Pi into a router.

I enabled ipv6 on my Pi running Raspbian and can connect from OS X using ssh. (Append ipv6 to /etc/modprobe to enable ipv6).

Unfortunately netatalk and tightvncserver on the Pi cannot connect via ipv6, although these work using ipv4. (It may be possible using IP tunneling).

A third possibility occurred to me; implementing DHCP on the Pi, but I have never tried it.

Connect an Ethernet cable from the Pi to your Mac, using an adapter if necessary. No crossover cable needed.

See Connect directly to Raspberry Pi from Mac over Ethernet.

Either of these could be solvable if the Mac provided interface bridging (which it does in 10.9+, but it doesn't really work with WiFi, which I need), or port forwarding for its NAT using Terminal (which I've had no success with, and apparently completely changed from natd to pf in Mountain Lion).

So what I did is create a remote forwarding SSH tunnel, since the Pi can see the Mac. it is created when the Pi starts up and is attached to Mac ethernet with Internet Sharing turned on.

(To set this up, the Pi serial console, but a screen+keyboard would have worked just as well; I probably could have also used SSH to get into the Pi if Internet Sharing was turned off.)

Now, when I start up my Pi, and it's attached to my Mac via Ethernet and Internet Sharing on the Mac is turned on, it creates a remote forwarding tunnel in which when my Mac gets traffic on port 2222, it forwards it through the tunnel to the Pi's port 22. So I can type:

Once you had shared your connection and connected your mac and your pi display your routing table : 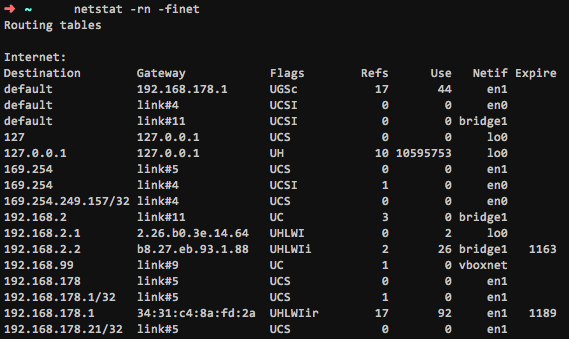 Once you know the IP address simply log in with SSH

Suppose you have set up your pi with a static ip address like 192.168.0.50 The first two numbers (192.168) represent your network address and the last two (0.50) are the 'subnet and host' numbers of the pi. If you try to connect by ssh with ethernet from the mac, the ip address of the mac must have the same network number 192.168, the same subnet number 0 but a different number for the host. In this case you might use 192.168.0.40 for the mac's ip. You can set this up using the Network icon on your mac's System Preferences panel using 'Configure iPv4: using DHCP with manual address', for example, on the ethernet settings.

First, use sudo raspi-config to enable ssh access. Then you must configure your mac to do internet sharing via ethernet (system settings > sharing). You should now be able to ssh pi@192.168.2.2.

2
RPI can't connect to internet
0
Pi2 SSH Connection refused
1
Login Raspberry Pi using SSH key pair does not work from Mac OSX Sierra
0
yet another question about headless on Mac OS X
4
Can ping, but not SSH into RP3
1
How can I connect to my Raspberry Pi 3 over SSH in this scenario?
0
ssh in local LAN: works with IP, but not by name
4
Can't SSH into RPI over WiFI
0
SSH connection hangs in Mac OS Terminal - No prompt for password