I downloaded several versions of Raspbian but always the first boot fails.

and starting into a shell

makes the system wait indefinitely before the login prompt appears.

I know that I have to edit

but for this a first boot would be helpful.

I had very similar problems with qemu 2.0.0 (installed via macports in my case), and switching back to the prior version made everything work.

I do not use homebrew, but this response at Stackoverflow has detailed instructions to revert to an earlier version of any package using Homebrew.

When booting first time you should use bash as init application and change /etc/ld.so.preload. Please note -append parameter:

Kudos for this hint should go to xecdesign for tutorial that explain how to boot versatilepb with arm1176.

I had similar issues and I finally got this working last night, on OS X 10.8.5 with QEMU v2.2.0, after working on/off for two weeks.

I was prompted by the question, Can I program for Arduino without having a real board?, to try to use a real emulator, such as QEMU, as suggested by zmo, in a comment to Anindo Ghosh's answer.

I thought that I would relate my experience here.

I set this up on a MacBook Pro, running 10.8. (Mountain Lion). I quickly found the link Installing QEMU on OS X1. Yes, I know is seems to be related to the Pi, but bear with me. After a quick browse, it was clear what was required.

First step was to set up the Mac with the correct environment. This required, in the following order:

Going into each step in detail

There was a failed download at first, due to the Thai telephone network dropping, which required a messy cleanup. But running the command again worked.

cd /usr/local/ # Or wherever you installed Homebrew.

Then unfortunately that page's instructions failed me as the links to the zImage and rootfs files on dropbox had been killed, due to over subscription, so I had to find another method. I decided to sleep on it, as I was getting irritated by now.

Then following morning, after a not so refreshing sleep, I found the link, QEMU – Emulating Raspberry Pi the easy way (Linux or Windows!)1 which, pretty much enabled me to carry on from where I left off.

This resulted in a cycle of SCSI errors, 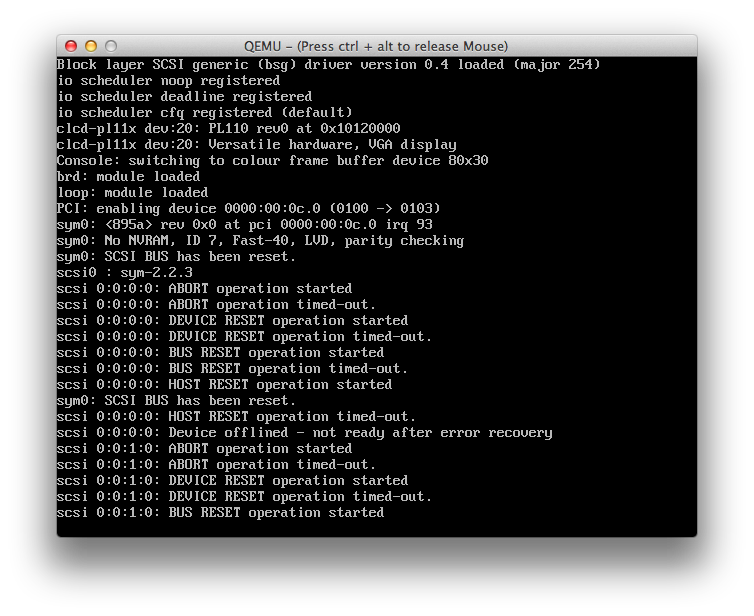 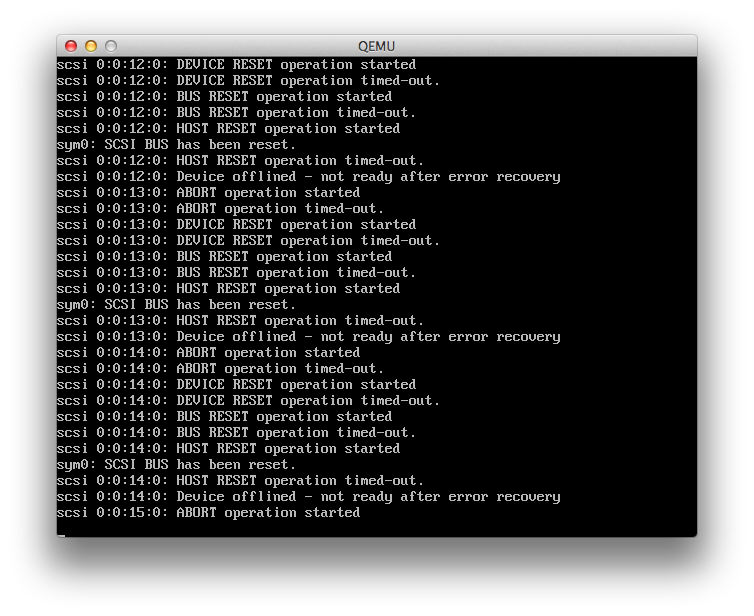 with the console in the QEMU window eventually crashing, at SCSI ID=15, 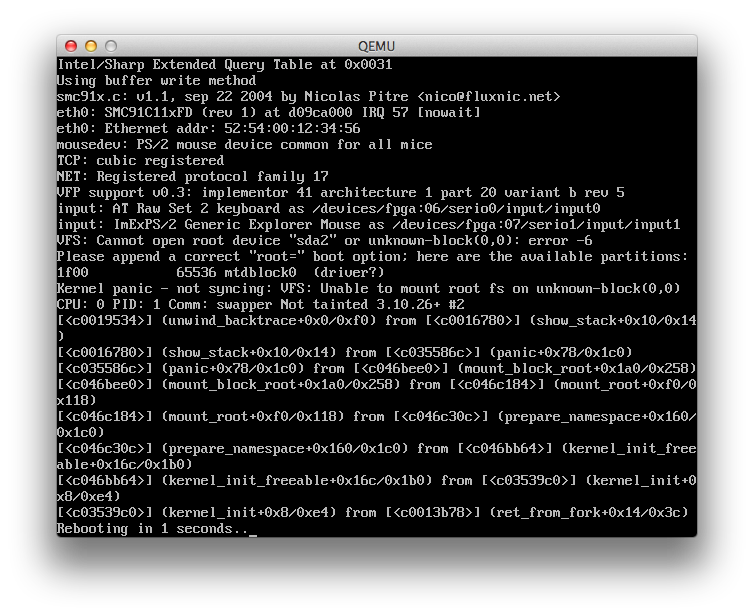 leaving the following error in the terminal from which it was run.

I tried the same command prefixed with sudo, but the same issue occurred.

I thought that the issue was the root=/dev/sda2. Copying the Raspbian image locally didn't help (it had been on a separate partition). Looking at the comments on the web page, a number of people were getting the same SCSI errors.

It appeared to be an issue with the version of QEMU. I was using 1.1.50

And running the first boot command

this time resulted in the expected command prompt.

I ran through the suggested edits of /etc/ld.so.preload and /etc/udev/rules.d/90-qemu.rules, without any issues arising.

However, I was unable to halt, shutdown or reboot the Pi. The errors received were 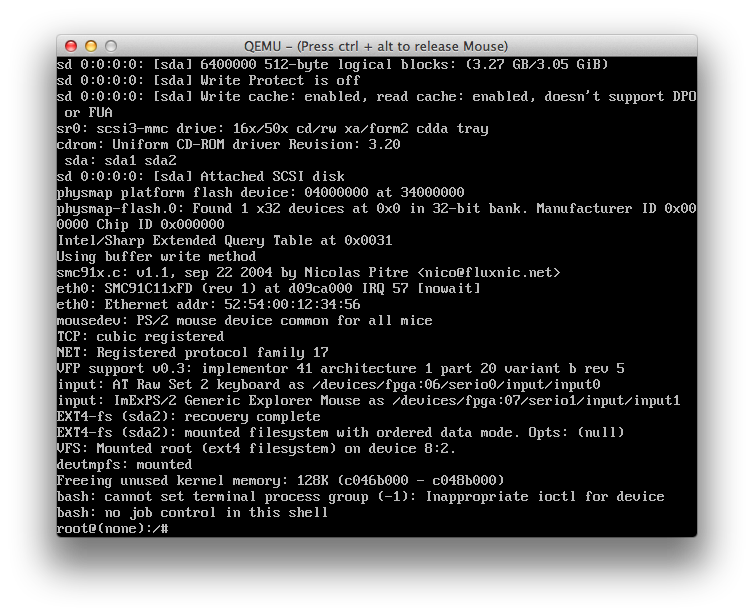 I ended up doing a hard reboot, by just quitting the QEMU app.

In the terminal were a lot of

I repeated the first boot, as a google2 suggested that the init issue could be solved simply by just a hard boot, but I still had the start up errors, and the halt errors. 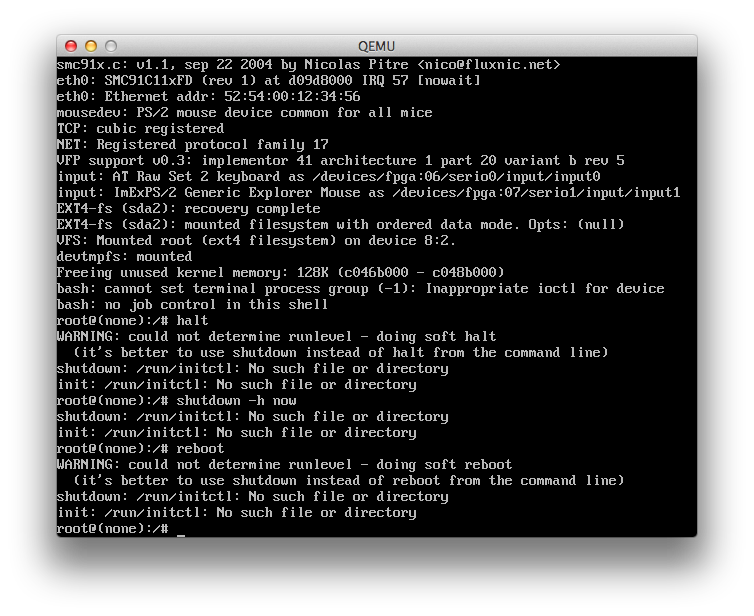 There was a "better" way of shutting down though, as I was given the tip (see below) that

In an attempt to lose the init errors, after some more googling3, I ran the following commands:

but, predictably, it was not persistent, and didn't fix shutdown.

which was persistent, but didn't fix the shutdown.

I encountered henje on Super User having the same issue. From shutdown: /run/initctl: No such file or directory

Thx for the reboot -f. Good tip. After further googling, a hard reboot is supposed to fix the issue, but it hasn't. I have also run mkfifo /run/initctl which stops the No such file or directory error, but still doesn't shut the system down. I now get init: timeout opening/writing control channel /run/initctl. I have compared the /run/initctl just created, with the one on my working RPi, and they look identical: prw------- 1 root root 0 Jan 1 1970 /run/initctl.

I carried on regardless, and ran the proper boot command, the same as the first boot, minus the init=/bin/bash

It booted, apparently without issue, into the raspi-config screen. I changed the hostname and pi user's password. Then hit Finish and agreed to the restart, the QEMU just exited, appearing to die, the window vanished.

command again. It booted to normal text console login. Logged in, ran startx, X can up. Ran sudo shutdown-h now. System shutdown without mishap, leaving System halted message. Although the CPU was left running at 100%, and the window did not close. I had to close it manually.

Ran same proper boot command again, it booted OK. It does run fsck each boot, so I am not sure if that is indicative of the halt not working correctly, or whether Raspbian does that anyway on each boot. However, upon sudo halt, I see the message

so I assume that it is OK and normal.

I hope that this (rambling) tale, helps someone else.

1 There is way too much info to attempt to summarise, in case of link death.

2 According to can't reboot debian and systemd-sysv, sysvinit: problems rebooting when switching between systemd-sysv and sysvinit

3 According to I got a error flag "init: /dev/initctl: no such file"

This works for me on MacOS Mojave,

Create a file called qemu_script.sh and copy-paste the code below

give execution perms and execute, 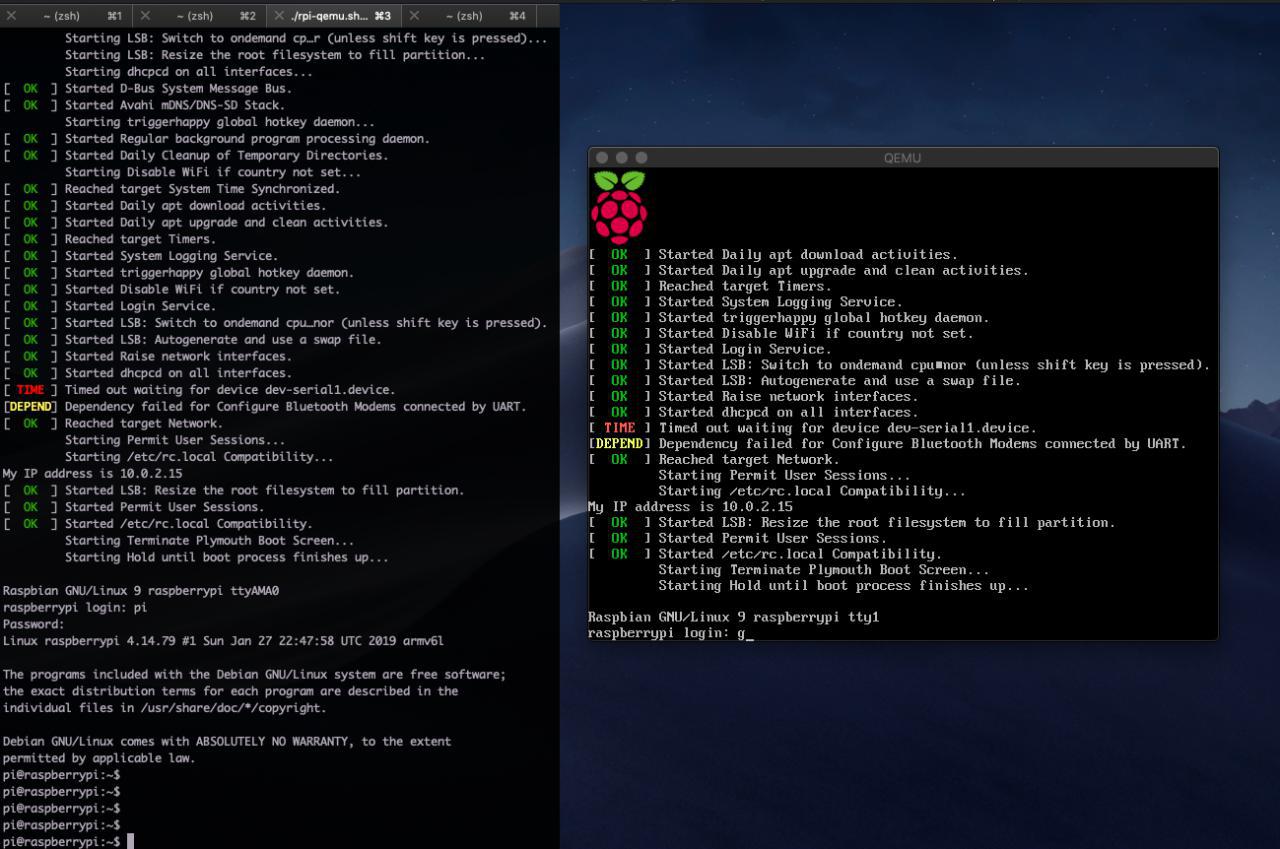 Not the answer you're looking for? Browse other questions tagged raspbian macos qemu or ask your own question.